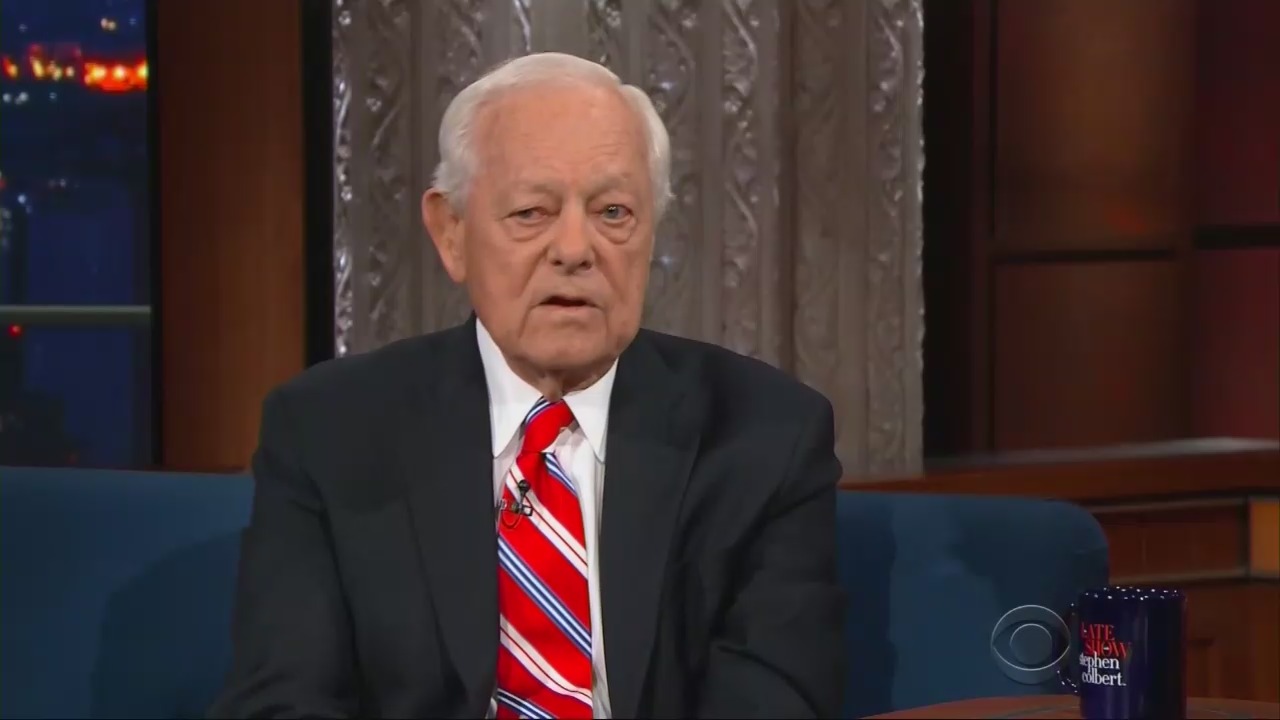 Longtime CBS news anchor Bob Schieffer pushed back on President Trump’s characterization of his network and others as “fake news” during an appearance on The Late Show With Stephen Colbert, October 9th. Schieffer blasted online media sources like Facebook, arguing that the public needs to understand that only the “mainstream media” vets, and fact-checks before printing or broadcasting their news.

Schieffer was on The Late Show to promote his new book, Overload, which he said was about “finding the truth” in today’s media landscape. Colbert prodded his guest to explain how the public was “overloaded” with too much information. Schieffer explained that the problem wasn’t with “media bias” but with the veracity of the sources where middle America was getting its news:

SCHIEFFER: Stephen, we're in the midst of this communication revolution that's totally changed our culture I think in as profound a way as the invention of the printing press, changed the culture of that day, and nothing has been more affected by all of this than our politics and the way we get our news. We've lost 126 newspapers over the last 12 years. One reporter in five now lives in either Washington, New York or Los Angeles. There are people out in the middle of the country. It's not about biased news, it's that they're not getting any news. Their newspaper has gone away. They're getting most of your news now on Facebook, which is a wonderful thing. It's a good way to keep up with your neighbors, but, you know, the things that pop up on Facebook have not gone through the same vetting process that you get when you listen to mainstream media or some of the more reliable news sources. There are some good sources out there, but there is also some really bad ones.

Colbert played devil’s advocate, saying that President Trump would argue that social media was a way for Americans to “go around the east coast elites” in the mainstream media. “What would be your response to saying that just a free flow of information is better than the vetting system that you're talking about?” he asked.

“Well, if you don't care what's true and what's false, that would be a good way to go about it,” Schieffer snarked, to audience applause.

He bragged, “We kind of check things out, Stephen,” adding “I mean, we don't print them and we don't broadcast them unless we determine it's true and traditionally that was the role of the news media.”

Schieffer then suggested what Trump was advocating was a hallmark of a totalitarian society, before boasting that the mainstream networks and print publications were in the business of truth-telling, just as “the founders meant” for them:

Look, we don't want a country where the only source of news is the government. That's a totalitarian society. ( Cheers and applause ) And our job is to give citizens another -- is to give citizens another carefully collected accurate set of facts they can compare to the government's version of the events, then they decide what to do about it. That’s our job, that's what the founders meant for us to do and that's what we're going to do. ( Cheers and applause )

Characterizing themselves as “patriots” is a newfound compliment news anchors have taken upon themselves recently. Disgraced CBS News anchor himself, Dan Rather, told Chelsea Handler, “I consider myself a patriot,” in an incredibly obtuse interview recently that completely ignored his own history with false reporting.

In case Schieffer needs reminding, his predecessor’s own “Memogate” scandal, reporting on forged documents about the president, got him fired from the network, and he certainly isn’t the only network reporter who has been caught--or got away with--spreading false reports over the years.