MSNBC Frets Trump Calling America Sovereign At UN Was ‘Over the Top,’ Did 'Permanent Damage' 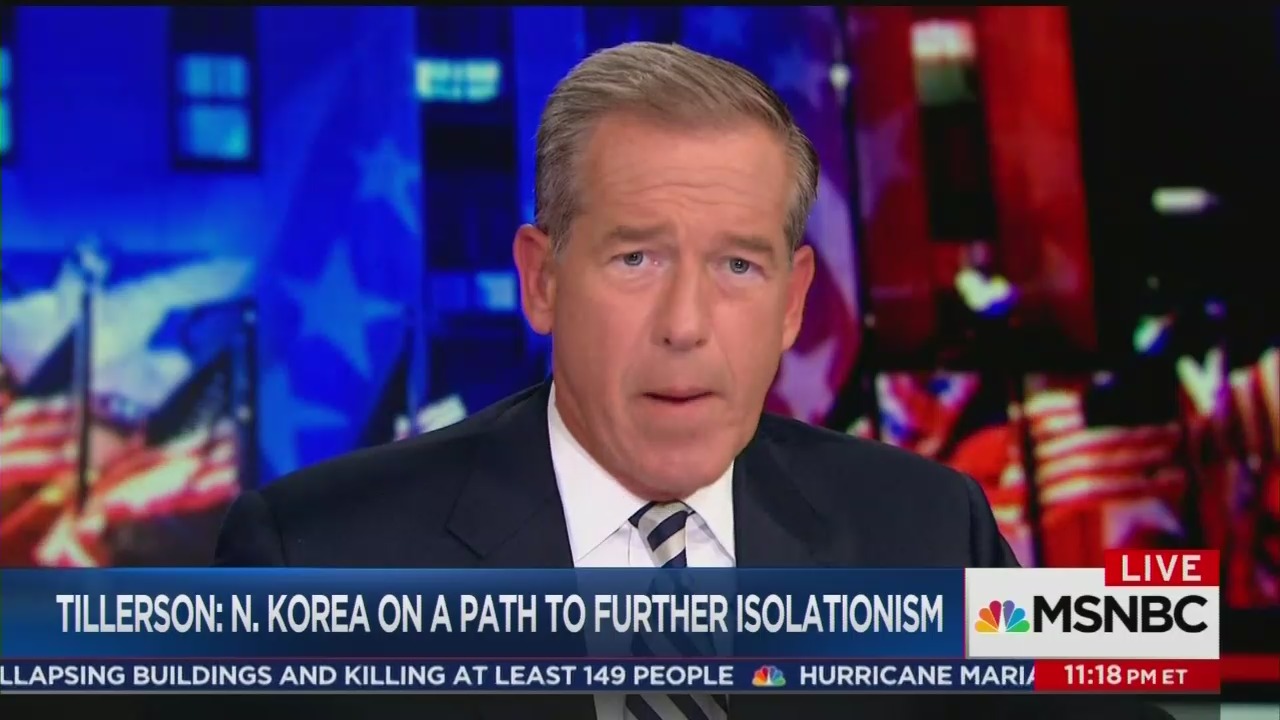 In the hours following President Trump’s speech to the United Nations Tuesday, the media frantically wondered if Trump wasn’t inviting nuclear war by condemning North Korea. Some networks like NBC, even sympathized with the American-hating regime of Iran while condemning our own president. MSNBC was no different, with anchor Brian Williams panicking on The Eleventh Hour September 20, that by Trump calling America “sovereign” he was sending a “dog whistle” to the UN that we didn’t need them anymore.

Williams was joined by a panel of liberal guests who shared his negative take on Trump’s speech. They included Jeremy Bash, former Chief of Staff for the D.O.D. and C.I.A. for Obama;

Stokols started off the conversation by slamming Trump’s speech as “bombastic.” He claimed, “talking tough and trying to intimidate world leaders” has “never really worked as a foreign policy.”

Williams then brought in Kumar, to wonder if Trump’s “threats” to North Korea were a “message to his base:”

I want to quote Anita and how she summed it up in her lede for McClatchy Newspapers. ‘President Donald Trump delivered the message of the voter elected him.’ In other words, in front of that iconic emerald stone which he has criticized as cheap and offered to redo, standing there before 139-member nations, you saw him talking to his base?

Kumar explained she saw these words as Trump appealing to his populist base. She cited recent disillusionment from his base over some of his decisions, but said this was “exactly” why his voters elected him.

The Commander-in-Chief is espousing this us vs. them mentality, really this neo-isolationism, drawing up the drawbridge and saying we’re going to fend ourselves. In a world which 97% of the population of the world lives outside our borders, we have to trade with them and work with them, we have to work in conjunction with them to solve the most critical problems of the world, and there he is at the United Nations saying we're going to go at it alone. It's really not a recipe for solving any of the problems that the United Nations can potentially solve.

Williams went back to Trump’s word choice, zeroing in on the word “sovereign.”

He asked Kumar, “Back to this use of this word sovereign and sovereignty, did you hear a buzzword or a dog whistle in his repeated use of that word?”

Kumar gushed it was “over the top” to use that word at an international conference:

KUMAR: Yeah, we knew he was going to talk a little bit about that because they had given us a little bit of preview, no words anything, so we were sort of expecting this theme, but it was just way more -- it was just over the top. You know, it caused me to go back through and count how many times he used that word sovereign or sovereignty 21 times.

KUMAR: It was definitely the word

WILLIAMS: So what does that mean?

Kumar went on to worry that by Trump calling our nation sovereign, he was “undermining the U.N.” and other international bodies by saying they “don’t matter:”

Everyone took rocket man but I took sovereignty. It just means what he was talking about, in the beginning. Which is, America first, we're going to go it alone and every other nation should be independent and free to do what they want and we should all gather together to fight what he called the wicked few I think he called it, the wicked ones. So, you know, that really undermines to me the U.N. which is where he was today, NATO, EU, places like that. International bodies he was really saying, don’t matter as much anymore.

Bash went on to claim that Trump’s “idea of nationalism” was really a “Russian ideology,” so by Trump not condemning Russia in his speech, he was playing into “Putin’s playbook.”

Williams ended the ridiculous conversation by asking Bash if Trump was doing “permanent damage” to America’s standing with the UN.

Bash warned that Trump was sending a “dangerous” and “concerning” message to the world.