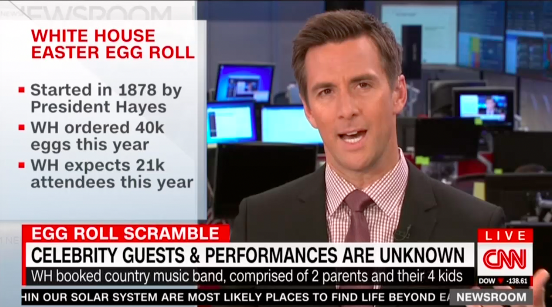 After a week of mild coverage towards Trump’s military actions overseas, apparently the news media couldn’t take it anymore and started grasping at straws again for issues they could bash Trump over. Apparently CNN found their lucky rabbit foot Friday in the White House’s upcoming Easter Egg Roll, which allegedly won’t be as spectacular a event as it has been in years past under Obama. On Good Friday nonetheless, CNN decided to absurdly lecture Trump on how he failed in pulling off the White House’s “biggest social event of the year.”

The silly segment began with fill-in anchor Dave Briggs noting the “biggest social event” held at the White House could be a “flop” after the Trump Administration was late to acquiring vendors and inviting guests to the annual event. “What does it say about this administration?” he actually asked his guest, New York Times reporter Julie Hirschfeld Davis.

DAVE BRIGGS: The president facing some major tests the past few weeks, and add this one to the list. The White House Easter Egg Roll. Sounds trivial, yes, but this is considered "the" biggest social event held at 1600 Pennsylvania Avenue, a tradition for more than 100 years. Here's the problem --  as of earlier this week many key vendors and schools say they haven't heard a peep about it. Back in mid-February, the company that manufactures the event’s eggs tweeted to the first family, “FYI, manufacturing deadlines for the Easter eggs are near. Please reach out.” Will this whole event, flop? And what does it say about this administration? Joining me to discuss, New York Times reporter Julie Hirschfeld Davis. Good morning Julie.

I don’t know CNN, maybe it “says” “this administration” cares more about taking out the largest terrorist group in the world than spending time petitioning celebrities to appear at a children’s event, but that’s just me.

The interview continued with Briggs asking Davis this snarky question:

BRIGGS: Was it actually that tweet that reminded the White House they'd forgotten about an event that has gone on more than 100 years?

DAVIS: Well, apparently they had been planning and somewhat aware of this event but they didn't have a lot of staff in place to actually execute on what is really sort of a beast of an organizational challenge to get 35,000 people in and out of the White House and doing a lot of different activities and so they had been underway in terms of discussions about the event but they hadn't reached out to key vendors like that company that manufacturers those eggs. Like talent that has been there in the past. Costumed characters from Sesame Street and the like. Toy companies they wanted to work with. They were just very late on the uptake in terms of actually setting the goals they needed to achieve before they could actually put this thing on.

After explaining how late to the game the White House has been, Briggs again begged Davis to tie this “failure” to Trump’s record as president. Davis happily obliged, deriding the lack of “staffing” and “organization” and “understanding” of how a White House is run.

BRIGGS: We know many school districts that genuinely expect tickets hadn't yet heard from the White House as well. This is supposed to be a light hearted, fun event at the White House. But larger, what is it indicative of, if they do struggle with the event?

DAVIS: Well, I mean I think like a lot of things with this White House we've seen a lack of staffing, a lack of organization. A lack of understanding of sort of the magnitude of the task. And once they got going, I mean, I think they have ordered the eggs, they are going to put on the event. Its going to be about Half as big as it was in previous years. There's not going to be anywhere near the amount of talent. There's no a-list talent they're planning to have, but I think what it shows you is, you know, this is a group that has not done this before. They were very, very slow to get key people in place in the West Wing, much less the East Wing which is still very understaffed. So, you know, it just shows you what happens when you come in to a challenge like this without any sort of understanding of what it's going to take to pull it off, and we've seen that on the policy side. Obviously we're seeing it on a little more of a light-hearted side with the egg roll.

BRIGGS: Largely a reflection of the staffing. You hear about that with foreign policy crises as well, but last we have to ask you about White House Press Secretary Sean Spicer, who dressed up as the Easter Bunny back in 2008 when working for the Bush Administration. Considering the week or weeks he's had, might he reprise that role for the White House Easter egg roll?

DAVIS: Well, it is not clear. He was asked about it at the White House briefing earlier in the week and he did not say. I have to say given everything that's going on with Sean right now, I would be surprised if he showed up in an Easter bunny suit, but it's always a possibility and like I said, there are many fewer people working on this event than there have been in years' past and so they could use a volunteer.

BRIGGS: Right, right. It might be a fitting punishment from President Trump. Get back in your bunny suit, Mr. Spicer. Julie Hirschfeld Davis from the New York Times. Thank you.

Clearly some of this interview was tongue-in-cheek, but still, this hardly seems to be a fitting issue for the media to criticize the president for.

On top of that, CNN played video footage from President Obama and President Bush at their own eighth and final Easter egg hunts at the White House. If this was supposed to be some sort of standard to which Trump's should be held up to, why wouldn’t CNN play video from Bush’s and Obama’s first Easter event in office?