Journalists Predictably Freak Out Over Reinstated Reagan Policy on Abortion

To start of his first week in office, Donald Trump spent the morning signing executive orders, one of which was reversing a pro-abortion policy from the Obama Administration. The “Mexico City” policy, more commonly called the “Global Gag” policy by the left, bans federal funds from being given to organizations who pay for or promote abortions overseas. It was originally enacted by Ronald Reagan in 1984 and was rescinded in 2009 by President Obama. Now eight years later, President Trump has reinstated the policy, and some liberal journalists’ displeasure with the news came across in their reporting and their tweets. 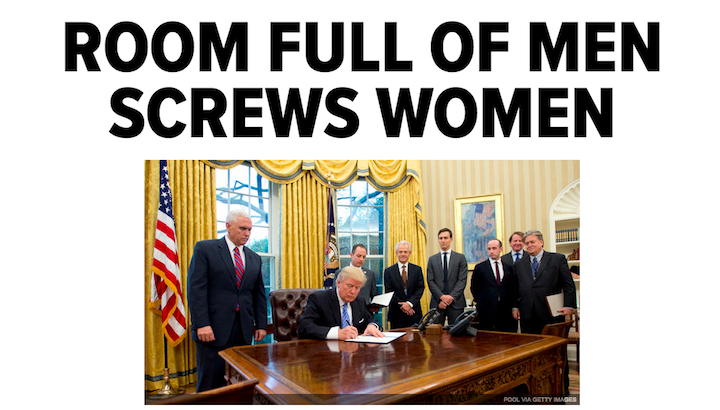 The front page of the Huffington Post, never known for its subtlety, breathlessly read: “Room full of men screws over women.” The attached article by Senior Political Reporter Amanda Terkel noted that Trump was “surrounded by men” as he signed this anti-abortion executive order. Terkel briefly described the policy, arguing that it would result in more “unsafe” abortions. She ended by slamming Trump’s cabinet’s lack of diversity: “Trump’s Cabinet is more white and more male than any president’s first Cabinet since Reagan,” she wrote.

Chloe Angyal, Senior Front Page Editor for the Huffington Post tweeted, “This is what exporting misogyny looks like.”

While Jessica Valenti, writer for The Guardian called it “patriarchy:”

If you're wondering what patriarchy looks like: A group of white men watch as Trump reinstates the #GlobalGagRule pic.twitter.com/ZV1OX41ziF

FYI: the "Mexico City policy" has nothing to do with Mexico or trade. It has to do with policing women's bodies. https://t.co/bMNXzNWX33

John Harwood of CNBC claimed the policy was about contraception, not abortion:

Unsafe abortion accounts for 13% of all maternal deaths globally. Trump's reinstating the 'Global Gag Rule' will be deadly.

Trump just reinstated the global gag rule. It won't stop abortion, but it will make it less safe. https://t.co/W5jP8KTqpk