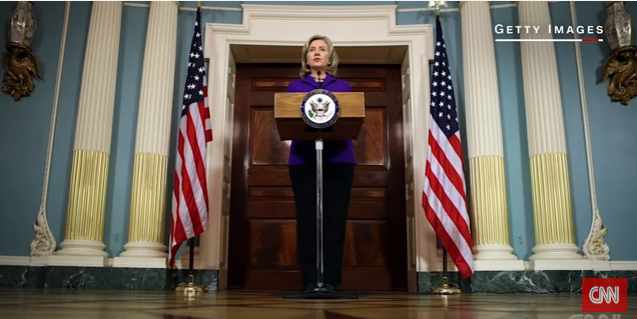 In perhaps their most brazen, pro-Hillary article yet, the Washington Post’s Editorial Board on Friday came out swinging at conservatives, independents, democrats, football players, Matt Lauer, and anyone else who dare question Clinton’s private e-mail server.  With much hand wringing and pearl-clutching, the Post’s staff opined that “history would judge” Americans for obsessing over a “minor e-mail scandal” that “empowered a dangerous man” to become president. Ironically, the paper’s staff took the exact opposite approach to the e-mails just a few months ago.

The board’s hand-wringing headline, “The Hillary Clinton e-mail story is out of control,” set the tone for the type of article to follow.  The paper's first target? Matt Lauer, of course.

“JUDGING BY the amount of time NBC’s Matt Lauer spent pressing Hillary Clinton on her emails during Wednesday’s national security presidential forum, one would think that her homebrew server was one of the most important issues facing the country this election. It is not.”

“Sadly, Mr. Lauer’s widely panned handling of the candidate forum was not an aberration,” the board wrote, before quoting NFL quarterback Colin Kaepernick as saying if Clinton “was any other person” she’d “be in prison,” as a common refrain surrounding this election.

Of course, the paper’s staff completely disagreed with Kaepernick’s assessment, arguing that, actually, her e-mails have “endured” “much more scrutiny” than “an ordinary person’s would have,” as if that’s surprising. Does someone need to remind the Post that Clinton was Secretary of State, (unlike the average person)?

"The story has vastly exceeded the boundaries of the facts,” the board added before their dramatic conclusion:

Imagine how history would judge today’s Americans if, looking back at this election, the record showed that voters empowered a dangerous man because of . . . a minor email scandal. There is no equivalence between Ms. Clinton’s wrongs and Mr. Trump’s manifest unfitness for office.

Uh, oh, you know the left mean business when they trot out the old, “Don’t be on the wrong side of history” guilt-trip. Also, can the words “minor”and “scandal” really be placed together, unironically?

Strangely enough, back in May, the Post had quite the opposite approach to Clinton’s e-mail investigation by the FBI, writing then that Clinton had an “inexcusable and willful disregard for the rules.” At the same time, that editorial was stoically un-emotional and stuck to the facts without any of the emotional outrage that today’s article expressed in her defense.