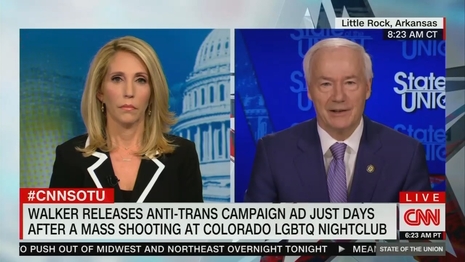 Much like the rest of the leftist media, CNN has a difficult time grasping the concept of biology and science. This basic fact was once again on full display on the network’s Sunday show State of the Union when co-moderator Dana Bash took issue with Georgia Republican Senate candidate Herschel Walker’s ad criticizing men competing with women in sports, in this case competitive swimming. Bash thought Walker’s ad “targets” trans people.

“After five people were killed at an LGBTQ nightclub in Colorado last week, you urged your fellow Republicans to tone down the rhetoric, particularly towards the trans community,” Bash lectured.

“But just days after that shooting, Georgia Republican senate candidate Herschel Walker debuted this ad I want to play, and it targets transgender athletes,” Bash said without explaining how the ad targets transgender people. Pointing out that it's unfair for a man who thinks he’s a woman racing an actual woman, isn’t meant to “target” anyone.

Bash then aired the powerful ad which features a young woman named Riley Gaines who lost to a man named Lia Thomas who was allowed to participate in the NCAA Division I Women’s Championships despite being a man.

In the ad Gaines articulated how unfair it was that she worked so hard and got up so early in the morning to practice swimming and yet still lost to a man who decided to join the women’s swimming team.

After airing the ad, Bash asked her guest Liberal Republican Governor Asa Hutchinson  “are you comfortable with what Walker is doing there?”

Instead of asking Bash what he’s supposed to be uncomfortable with, he simply accepted the premise of the question and said he’s comfortable with the ad and noted how he had already “signed a law in Arkansas that prohibited biological males from competing with women in women's sports.”

Bash was still whining about the ad and the so-called timing of its airing. She appeared to take issue with the fact that it was released days after the shooting at the “LGBTQ” night club in Colorado Springs, Colorado.

“What about the timing there?” Bash asked.

Proving that he’s a prime example of what Daily Wire host Michael Knowles calls “playing court jester in the kingdom of liberalism,” Hutchinson once again accepted the premise of Bash’s ridiculous question and agreed with it.

“That's a fair question, but it happens to be in the middle of an election, and you can't hardly pull everything down,” Hutchinson mumbled.

The basic science and biology that CNN doesn’t understand is that men are naturally stronger physically than women and it’s unfair to let men compete with women in sports and pretend that there will be an even playing field.

It’s not an attack on transgender people to point that out.

This segment was made possible by Dove. Their information is linked.

DANA BASH: Governor, after five people were killed at an LGBTQ nightclub in Colorado last week, you urged your fellow Republicans to tone down the rhetoric, particularly towards the trans community. But just days after that shooting, Georgia Republican Senate candidate Herschel Walker debuted this ad I want to play, and it targets transgender athletes.

RILEY GAINES: For more than a decade, I worked so hard, 4:00 A.M. practices to be the best. But my senior year I was forced to compete against a biological male.

GAINES: A man won the swimming title that belonged to a woman. And Senator Warnock voted not to let it happen.

[cuts back to live]

BASH: Are you comfortable with what Walker is doing there?

GOVERNOR ASA HUTCHINSON: Well, I am. I signed a law in Arkansas that prohibited biological males from competing with women in women's sports. To me it's about the tone and about the broader arena. We also passed a hate law in Arkansas. We shouldn't be targeting anyone because of their race or their gender. We also have to speak in a compassionate way and to have an understanding heart. And so these are difficult issues that we're dealing with as a society. And it's fair to debate and discuss—

BASH: What about the timing there?

HUTCHINSON: That's a fair question, but it happens to be in the middle of an election, and you can't hardly pull everything down. That's a fair question. But the substantive issue is one that's on the hearts and minds of people, and you've got to be able to talk about it, state your position on it, and you've got to recognize these sensitive issues have to be dealt with by parents, by school officials, by employers as well. And what happened in that nightclub is a human tragedy. And we all have to be able to express ourselves with compassion toward that, understanding and we need to work through this as a society. These are challenging issues, and what happened is just simply wrong.