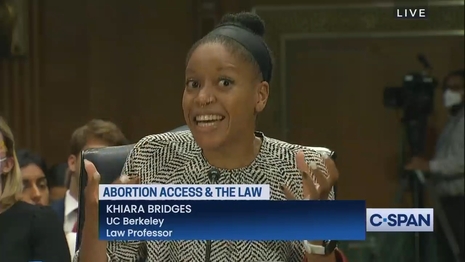 On Tuesday, the Senate Judiciary committee held a hearing on the legal ramifications of the Supreme Court overturning Roe v. Wade. During the hearing those watching were forced to witness a bizarre exchange between Senator Josh Hawley (R-MO) and UC Berkeley Law professor Khiara Bridges, with Bridges falsely claiming men can get pregnant.

Not to embarrass their party and draw any more attention to the incident out of fear that President Biden might be forced to comment on it, all three evening newscasts not only ignored the testy exchange, but they ignored the entire hearing.

Following up on Bridges' comment in a previous exchange with Texas Senator John Cornyn where she used the phrase “person with a capacity for pregnancy.”

You’ve used the phrase “people with a capacity for pregnancy. Would that be women? Hawley asked.

This is a Berkeley law professor... pic.twitter.com/dBhTCeVTQc

“So this isn’t really a women’s rights issue, it’s a what?” Hawley replied.

“We can recognize that this impacts women while also recognizing that it impacts other groups. Those things are not mutually exclusive, Sen. Hawley,” she snarked back.

A clearly confused Hawley asked if her view is “if the core of this right then is about what?”

That visibly triggered the professor who lashed out to claim Hawley’s “line of questioning is transphobic and it opens up trans people to violence by not recognizing...”

Here’s the exchange that happened moments before with Cornyn where the witness used the phrase “person with a capacity for pregnancy” 5 times in one minute.pic.twitter.com/eYaOYumYSJ

Hawley interrupted her to express his shock at her accusations: “Wow, you’re saying that I’m opening up people to violence by asking whether or not women are the folks who can have pregnancies?”

“I want to note that 1 in 5 transgender persons have attempted suicide, so I think it’s important” Bridges said.

A clearly fed up Hawley subsequently asked Bridges “Is this how you run your classroom? Are students allowed to question you or are they also treated like this where they’re told that they are opening up people to violence by questioning?”

Just by asking simple questions, Hawley exposed the insanity of the transgender ideology. This radical trans agenda cannot hold up under even the slightest bit of scrutiny which is why the leftist evening news broadcasts decided to ignore it.

This bias by omission was made possible by Progressive on ABC, TD Ameritrade on CBS, and Prevagen on NBC. Their information is linked.