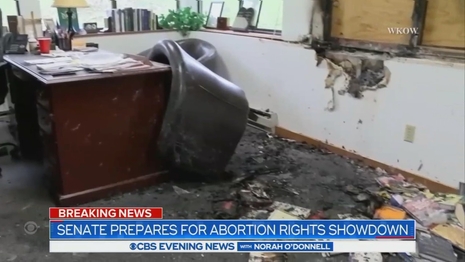 After a weekend of leftist abortion activists tormenting the six conservative Supreme Court justices at their homes and desecrating or setting pro-life clinics on fire, ABC’s World News Tonight decided on Monday to move on from the destruction of property and menacing behavior that took place for the simple reason that their behavior makes their demonic abortion agenda look bad.

ABC did cover it on Sunday’s World News Tonight and the overnight Monday shows World News Now and America This Morning, but left this act of terrorism in the dust by Monday’s Good Morning America.

To their credit, ABC’s competitors CBS Evening News and NBC Nightly News still touched on the vandalism that took place (albeit briefly) with CBS’s only mention was in passing when congressional correspondent Nikole Killion reported that the Biden administration had “condemned an attack on an anti-abortion organization outside Madison Wisconsin, Sunday, which is being investigated as an arson.”

NBC’s brief mention was a way to note how the protests over the leaked Roe v. Wade decision by the Supreme Court is “becoming increasingly personal.” In her report, correspondent Blayne Alexander reported how over the weekend “in Madison, Wisconsin, a pair of Molotov cocktails shattered the windows at the Wisconsin Family Action Office an anti-abortion group.”

Meanwhile, ABC decided to fret over Republican Senate leader Mitch McConnell promising to pass a “federal ban on abortion” if Republicans take back the White House and both houses of Congress in 2024.

“If Roe is overturned, twenty-six states would quickly move to severely restrict access to abortion or ban it outright. Thirteen have already passed so-called trigger laws, that would ban the procedure the moment Roe is struck down,” Bruce huffed.

ABC clearly realized letting their viewers witness what pro-abortion advocates are doing is detrimental to the pro-abortion cause. This is why they were moving the eyes of viewers away from images of their fellow leftists burning pro-life clinics with Molotov cocktails.

World News Tonight’s dishonest omission of violence by abortion activists was made possible by Prevagen. Their information is linked.

MARY BRUCE: After a weekend when thousands took to the streets rallying for abortion rights, some gathering outside the homes of Supreme Court Justice Brett Kavanaugh. And Chief Justice John Roberts, tonight, security around the justices is stepping up. The U.S. Marshals now involved in protecting the members of the court, after that leaked draft opinion indicated they're preparing to overturn Roe v. Wade.

It comes as the top Republican in the Senate, Mitch McConnell, is indicating overturning Roe could be just the beginning. That if Republicans gain control of Congress, they could pass a federal ban on abortion. McConnell saying, "if the leaked opinion became the final opinion, legislative bodies, not only at the state level, but at the federal level certainly could legislate in that area," adding, "I don't think it's much secret where Senate Republicans stand on that issue." Today we took that to the White House.

How at-risk does the administration believe the U.S. Is to completely outlawing abortion?

JEN PSAKI: I think we're at serious risk. You heard, you noted, Mitch McConnell and other Republicans in Congress are talking about a national ban on a woman's right to choose.

BRUCE: The White House warning Republicans could go try to go even further, possibly banning some forms of contraception. If Roe is overturned, twenty-six states would quickly move to severely restrict access to abortion or ban it outright. Thirteen have already passed so-called trigger laws, that would ban the procedure the moment Roe is struck down. Now a number of Democrat-led states like New York and Connecticut are exploring ways to assist women seeking help. And today, Chicago's Mayor announced funding to help women from other states who cross into Illinois to get an abortion.

NIKOLE KILLION: The fervent divide sparked heated protests over the weekend, outside of the homes of Supreme Court Justices Brett Kavanaugh and John Roberts.

JEN PSAKI: Violence threats and intimidation have no place in political discourse.

KILLION: The White House also condemned an attack on an anti-abortion organization outside Madison Wisconsin, Sunday, which is being investigated as an arson and CBS News has learned law enforcement officials are monitoring threats from activists on both sides of the debate.

BLAYNE ALEXANDER: With the landmark Roe v. Wade decision hanging in the balance, the protests are becoming increasingly personal. In Madison, Wisconsin, a pair of molotov cocktails shattered the windows at the Wisconsin Family Action Office an anti-abortion group.