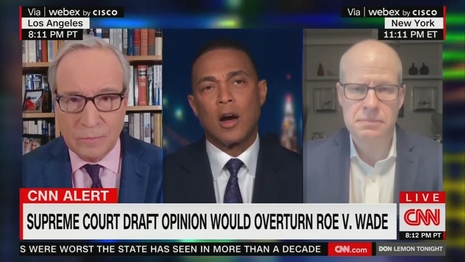 On Wednesday, CNN’s Don Lemon proved once again how little he knows about anything he discusses on his low-rated primetime program Don Lemon Tonight. Further evidence of this is the fact that he asked two of his guests, Atlantic senior editor Ron Brownstein, and Washington Post columnist Max Boot why the Second Amendment is “sacrosanct” but Roe v. Wade is not.

Lemon first wanted to know why the Supreme Court seems poised to strike down Roe v. Wade despite a CNN poll showing that a “majority of Americans don't want Roe v. Wade to be overturned.” Brownstein tried explaining to Lemon it’s because “the President nominates and the Senate confirms Supreme Court Justices” and because “both are tilted in the direction of small, rural predominantly white Christian states that Republicans dominate.”

Brownstein repeated the irrelevant fact that “Democrats have won the popular vote in seven of the past eight presidential elections” as if winning the popular vote matters in a system where the President is decided based on the electoral college. Attempting to slime his fellow Americans of the opposing party, he claimed: “the America of 1950 is now in [a] position to write the legal rules for the America of 2050.”

Proving again that he’s unfamiliar with our judicial system, Lemon asked Brownstein in response why the issue of abortion rights “take so much precedent” and why shouldn’t Americans be allowed to get abortions and “if you don't believe in it, don't get an abortion.”

Brownstein disregarded the fact Supreme Court Justice Alito’s majority opinion spelled out how overturning Roe v. Wade would not open the door to reversing gay marriage and claimed to know better than an Ivy league justice: “despite some language to the contrary in the Alito draft, once you say that there is no right to privacy, there are other decisions. Interracial marriage, same-sex marriage, contraceptions [sic] that are at risk.”

“That's what the concern is that it's going to lead to other things, that it's a slippery slope” Lemon responded in fear. Turning to Max Boot, he asked with stunning ignorance, even for him “why then for conservatives is the Second Amendment sacrosanct but…Roe v. Wade is not.”

Boot claimed Lemon asked “a good question” and proclaimed that the “conservative majority on the court is going to tell states that they can essentially outlaw abortion but they cannot do anything about people packing guns in the streets.”

This constitutionally ignorant segment was made possible by ADT Security Services, Sleep Number, and Life Alert. Their information is linked so you can let them know about the kind of content they fund.

DON LEMON: This is CNN's polling, it shows the majority of Americans don't want Roe v. Wade to be overturned so explain how something so important in the lives of so many is happening when you know when most people aren't on board with this.

RON BROWNSTEIN: Well, the short answer is the President nominates and the Senate confirms Supreme Court Justices, and elections for both are tilted in the direction of small, rural predominantly white Christian states that Republicans dominate. Democrats have won the popular vote in seven of the past eight presidential elections, something no matter has done since the formation of the modern party system. And if you go back to 1980 and you divide half of each–you assign half of each state's population to each Senator, Republicans have represented a majority of the country in the Senate only once in the last forty-two years and yet, Republicans have appointed six of the nine Supreme Court justices.

In fact, five of those Republicans have been appointed by Republican Presidents who initially lost the popular vote and four confirmed by Senators who represented less than half of the country, and what's more, it's not only kind of the overall population numbers, the Republican coalition is centered overwhelmingly on the places in the country, the states that are the least touched by the demographics and cultural changes remaking America in the twenty-first century, with the result I think when you add all of this up is that the America of 1950 is now in position to write the legal rules for the America of 2050.

LEMON: To Congresswoman Spears' point, why then is a religious issue, why does it take so much precedent. Why is it looming so large on a political issue, excuse me I shouldn't say political, on a personal issue. Shouldn't there be a separation of church and state, should people who want to be able to get abortions with restrictions, shouldn't they be able to get abortions, and, those who don't, if you don't believe in it, don't get an abortion?

BROWNSTEIN: Well, you know, look, the polling you cite that most Americans do not want to overturn Roe has been true for fifty years, has been true throughout the entire Roe period. Americans have consistently said they do not want to overturn Roe, and somewhere around sixty percent to sixty-five percent are saying in polls that they believe abortion should be legal in at least some circumstances. So yes, and in fact, across almost every religion as the Public Religion Research Institute pointed out in a new release this week, white evangelical Christians are the only major religious group at this point in which a majority says abortion should be illegal in most circumstances.

That's a very powerful constituency inside the Republican Party, and you know, it's not only abortion as I think many people have pointed out, despite some language to the contrary in the Alito draft, once you say that there is no right to privacy, there are other decisions. Interracial marriage, same-sex marriage, contraceptions that are at risk. And more broadly, Don, the Supreme Court Republican majority has basically hung out a shingle encouraging red states to challenge any precedent that conservatives don't like. Today the Governor of Texas Greg Abbott said that he wants to revisit the 1982 decision that requires states to provide public education to the children of undocumented immigrants. It's not going to be long until I think until some red state challenges make a decision on same-sex marriage,

LEMON: That’s what the concern is.

BROWNSTEIN: This is basically what they are inviting by such a sweeping language and their willingness to revoke a fifty-year-old constitutional right.

LEMON: That's what the concern is that it's going to lead to other things, that it's a slippery slope. Max, why then for conservatives is the Second Amendment sacrosanct but this one is not, the Roe v. Wade is not.

MAX BOOT: Well, that's a good question, Don, I think you're moving into a situation where the current very conservative majority on the court is going to tell states that they can essentially outlaw abortion but they cannot do anything about people packing guns in the streets. I mean It's a bizarre situation. It really doesn't make a lot of logical sense. It can only really I think be understood in terms of conservative ideology, which really seems to be what the conservative majority is legislating on. It's not really the law. What they're trying to do is exactly what they have accused liberals of doing for fifty years which is to impose their political preferences from the bench at a time when as Ron points out, they are largely losing the popular fight in the country at large, that the trends of the country are moving away from this very conservative world view which is held primarily now by people in rural areas and smaller states but those rural areas and smaller states essentially have a hammerlock on the Senate, on the electoral college, and therefore on the Supreme Court, which is increasingly unrepresentative of the country at large and yet nevertheless, is acting in an increasingly radical and sweeping manner disregarding the lack of popular support for their decisions and I really think this is only exacerbating the crisis of legitimacy for our government, and undermining the basis of our democracy which is something that is already happening with everything from January, 6 and the big lie and there's so many other factors that are undermining support for our institutions and this is just another one of those that leads me to be very concerned about this country's future.