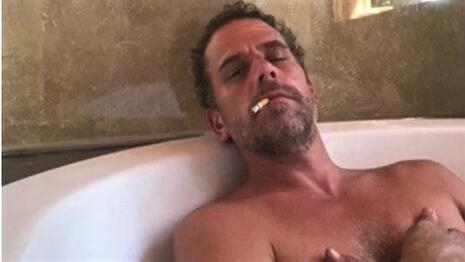 On Thursday afternoon, it was revealed that federal investigators have subpoenaed a treasure trove of documents having to do with Hunter Biden including his tax returns and documents from a paternity lawsuit.

Needless to say, if this was former President Trump’s son this would be the lede story on every nightly newscast. However, since this has to do with Joe Biden’s delinquent son, ABC’s World News Tonight, CBS Evening News, & NBC Nightly News wanted nothing to do with the story. Instead, all three networks used valuable airtime obsessing over Governor Ron DeSantis’s support for revoking Disney’s special self-governing privileges.

While CBS decided not to air the news of Hunter’s latest legal troubles, they did have an article by senior investigative correspondent Catherine Herridge on CBS News’s website.

According to a December 2020 subpoena from the U.S. Attorney's office in Delaware, which CBS had obtained, they “requested all documents regarding [Hunter] Biden's income, assets, debts, obligations, and financial transactions… and all personal and business expenditures.”

Attorney Clint Lancaster, who represented Lunden Roberts, “a woman who filed suit against Hunter Biden in 2019 alleging he was the father of her child” had told CBS that prosecutors “wanted every record relating to Hunter Biden we had."

According to a court filing from that lawsuit, "DNA testing has established with scientific certainty” that Hunter Biden is indeed the father of Robert’s three-year-old child.

The subpoena also requested a “wide range of tax documents” related to Hunter Biden which, according to Lancaster, the time frame of the requested tax records “overlapped with the time period of Hunter Biden's foreign business dealings.”

According to CBS, the subpoena requested:

All federal, state, local, and foreign tax documentation related to Biden, including but not limited to, IRS Forms 1099, income and payroll tax returns, state tax returns, and amended tax returns.

Lancaster also noted that “in the fall of 2021, the Assistant U.S. Attorney in Delaware, Lesley Wolf, traveled to his Arkansas law office, joined by at least two federal agents, one from the FBI and the other an IRS enforcement agent.” Investigators asked him about several companies that Hunter Biden has been involved with in the past which included Rosemont Seneca Partners, where Biden worked.

And according to former U.S. Attorney Harry Litmann, "The whole thing is as serious as a heart attack, People are going in and out of the grand jury. They are trying to plumb the depths. They're playing hardball."

If only our media would play hardball and actually report on this news.

This latest network blackout of all bad news about Hunter Biden was made possible by Liberty Mutual on ABC, Ensure on CBS, & Prevagen on NBC. Their information is linked