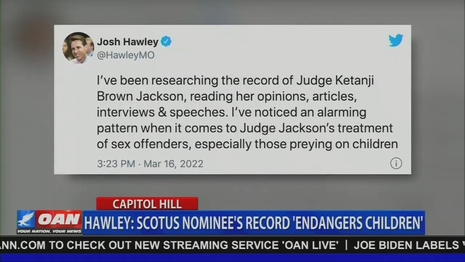 While the networks ignored these troubling allegations, they were busy reporting on the St. Patrick’s Day parade, Food deserts, and the weather.

I’ve been researching the record of Judge Ketanji Brown Jackson, reading her opinions, articles, interviews & speeches. I’ve noticed an alarming pattern when it comes to Judge Jackson’s treatment of sex offenders, especially those preying on children

Hawley also said that Judge Jackson has been advocating for letting child predators off the hook since she was in law school. This includes her questioning whether to make “convicts register as sex offenders - saying it leads to ‘stigmatization and ostracism.’ She’s suggested public policy is driven by a ‘climate of fear, hatred & revenge’ against sex offenders”

As far back as her time in law school, Judge Jackson has questioned making convicts register as sex offenders - saying it leads to “stigmatization and ostracism.” She’s suggested public policy is driven by a “climate of fear, hatred & revenge” against sex offenders pic.twitter.com/2QUcPOnWPR

Hawley also noted that during Jackson's time on the U.S. Sentencing Commission she said she "'mistakingly assumed that child pornography offenders are pedophiles' and she wanted 'to understand this category of nonpedophiles who obtain child pornography'."

In her time on the U.S. Sentencing Commission, Judge Jackson said she “mistakingly assumed that child pornography offenders are pedophiles” and she wanted “to understand this category of nonpedophiles who obtain child pornography.” pic.twitter.com/ZM16VAqpLo

Hawley also alleged that while Jackson served on the D.C. District Court, she also ruled in decisions that gave pedophiles much lighter sentences than the guidelines require.

According to the Daily Caller, White House Press Secretary Jen Psaki "pushed back against these claims, saying Jackson’s sentencing of sex crimes were 'consistent' with recommendations at a Thursday press briefing. She claimed Hawley 'took a snippet of a transcript out of context' when Jackson was repeating a witness’ remarks in order to ask a question about their testimony."

Regardless, the fact of the matter is that if these allegations were waged against a Republican Supreme Court nominee, the evening newscasts would have led with the story, not ignored it. We know this because, in 2018, Democrat Senator Dianne Feinstein (CA) alleged in a letter to the FBI that Brett Kavanaugh had attempted to assault a 17-year-old girl at a party almost forty years prior.

There was little evidence provided at the time, as well as scant details about what was even in the letter and NBC Nightly News still ran with it. Then when more details emerged showing the whole story was full of holes, including accounts from others who denied certain events even occurred, the networks were not at all intellectually curious about them.

This appalling example of bias by omission from the three networks was made possible by TD Ameritrade on CBS, Fisher Investments on ABC, and Liberty Mutual on NBC. Their information is linked so you cant let them know about the biased news they fund.