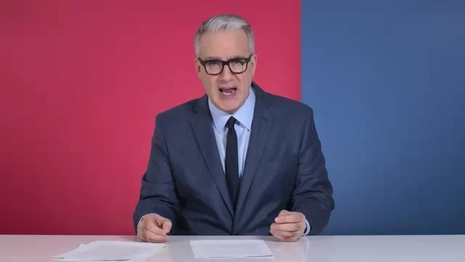 According to a report by the Daily Beast, MSNBC was looking to replace Rachel Maddow with former MSNBC host Keith Olbermann until Maddow voiced opposition to the move.

"NBCUniversal CEO Jeff Shell and NBCUniversal News Group Chairman Cesar Conde were in talks with Olbermann about returning to the network, Olbermann told Source Material, a newsletter for the Daily Beast. But those discussions were put to an end with Maddow opposing the idea," Washington Examiner writer Elizabeth Faddis reported.

Olbermann lashed out at Maddow's production consultant and former MSNBC president Phil Griffin in a statement after the news broke: "I offered to have her production company 'produce' the show. Would give her proxy control and a f***ton of money, but she and Phil Griffin refused. I do not expect to continue negotiations with the successors to this management team. Management is worse than asleep at the switch."

In January, Maddow announced she was taking a hiatus from her weeknight show to work on various projects like filming a movie based on her book and podcast on former Vice President Spiro Agnew called "Bag Man". This despite recently signing a $30 million dollar contract with MSNBC to continue hosting her show The Rachel Maddow Show.

The fact that Olbermann was even being considered is strange considering he was suspended from MSNBC for making political contributions during the 2010 midterm elections in a blatant violation of the network's rules. He subsequently left the network in January 2011. Olbermann was also fired from ESPN in 2015 for making insulting comments about Penn State students on Twitter.

But we shouldn't be surprised, it's clear that MSNBC is desperate for new on-air talent. So much so that they have reportedly sought after White House Press Secretary Jen Psaki.