Chris Matthews gave guest Harry Reid (D-Nevada) a softball interview tonight wherein the Senate Minority Leader blamed Republicans on a lack of comity in the world's greatest deliberative body and insisted Democrats had always opposed extreme delay-and-deny tactics for presidential judicial nominations. Although this is patently false, Matthews didn't challege his assertions, even though Reid cited the case of Priscilla Owen, a Bush appointee who languished for four years before confirmation thanks to Democratic delay tactics.

Reid, you may recall, was widely excoriated, including by liberal-leaning "fact-checker" sites, for having apparently lied on the Senate floor about Mitt Romney's taxes in 2012. Confronted with his fabrication, an unrepentant Reid shrugged off criticism by noting of Romney, "[he] didn't win, did he?"

That crack exemplifies a cynical ends-justify-the-means partisanship that marked Reid's tenure as majority leader from the time Republicans captured the House in 2011 until Republican retook the Senate in 2015.

But naturally, partisan cheerleader Chris Matthews was perfectly content in his February 18 interview from The Strip in Las Vegas to help Reid paint himself as a principled liberal fighter who could compromise and work across the aisle but who had grown sick and tired of Republicans' rough-and-tumble tactics opposing President Obama.

"Why are you retiring?" Matthews asked his subject, adding, "You're up now. You're ready for the fight!"

"I just think it's time, Landra and I have decided, it was the right time," Reid answered. "I made the decision before I hurt myself," he added, referring to his eye injury, "but we were going to do that anyway.... [I]t's the best thing for us."

"What's changed in [your] 30 years [in the Senate]?" Matthews then asked Reid, who replied:

The non-collegiality. I've had such great relations with Republicans. Trent Lott, I loved working with him. Frist and I had some battles, but he was good. It's just this new, I hate Obama, that has been so horrible.

"It smells," Matthews huffed in agreement. "And we see it and we smell it."

Of course, Reid has his share of blame for the lack of collegiality and the dysfunction of the Senate, such as perennially refusing to vote on a federal budget and persistently refusing to allow Republican amendments to the Senate floor for an up-or-down vote when he was majority leader.

Earlier in the segment, Matthews and Reid compared notes as they both trashed Mitch McConnell and Reid ludicrously asserted that Democrats had never filibustered George W. Bush's Supreme Court picks – even as President Obama is now expressing regret that he participated in a filibuster against Samuel Alito.

MATTHEWS: Well, let's talk about the process, because if it gets as far as hearings, it gets a report out of committee? 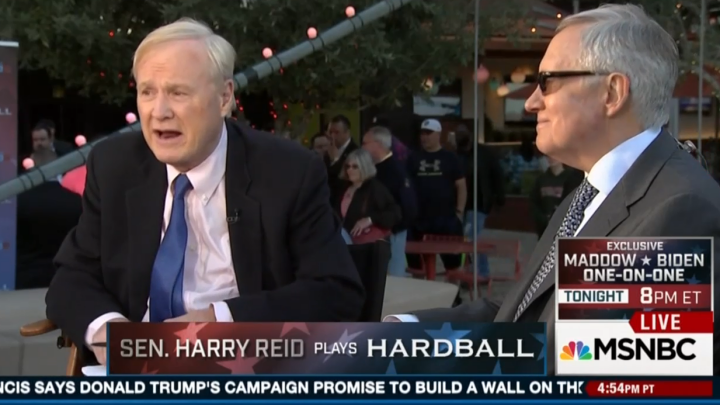 MATTHEWS: Then, what can you as minority leader do parliamentarily to get that to a vote. You can't add it on as an amendment, as a rider, can you?

MATTHEWS: There's no way you can jam it in, and you can bring it up?

MATTHEWS: No way. So it's all up to this guy, McConnell, who said when Obama got elected, his number one goal was to get rid of him, and then he said in this thing, the number one thing he was going to do was do nothing.

REID: And, it's interesting, his own newspaper Louisville Courier today went in some detail about how he's been so wrong and what he's doing now because the statement he's made in the past. For example, he wrote a law review article back in 1971 that's diametrically opposed to what he's talking about now.

MATTHEWS: Are you being consistent?

Yes, Priscilla Owen eventually got confirmed to her seat on the Fifth Circuit Court of Appeals, more than FOUR YEARS after having been nominated, thanks to Democrats in the Senate holding up the vote until Republicans reclaimed control of the upper chamber in 2005. As CNN.com reported at the time, it was Republican threats to use the "nuclear option" to dismantle the filibuster which played a role in Owen finally getting an up-or-down vote (emphases mine):

WASHINGTON (CNN) -- The Senate approved Priscilla Owen on Wednesday for a seat on the 5th U.S. Circuit Court of Appeals, more than four years after President Bush first nominated her.

The vote was 55-43, largely along party lines. The court sits in New Orleans, Louisiana, and its jurisdiction is Texas, Mississippi and Louisiana.

"The fact that she is willing to put herself forward and has been beaten up mercilessly on the floor of the United States Senate but has stood tall ... says a lot for her," Frist said.

One of the senators who voted against Owen's confirmation, Democrat Charles Schumer of New York, said Owen is "at the extremes."

"Someone will be put on the [appellate] bench who puts the rights of employers over employees," he said, "who takes no consideration of environmental rights, women's rights or of just average people.

"It's no wonder that she was pushed ahead by certain groups in Texas and elsewhere because she always takes the side of the very powerful."

Before the voting began, Senate Minority Leader Harry Reid of Nevada told his colleagues they should put the feuding over the use of the filibuster to block judicial nominations behind them.

"We should just move on," Reid said. "Filibusters are [used] only under extraordinary circumstances. Filibusters don't happen very often, and I think we should move beyond this. Let's go on and get the business of the country done."

Frist, a Tennessee Republican, called the filibuster fight the "greatest single constitutional issue to confront the Senate in our lifetime."

He said an agreement reached by 14 senators Monday night left open questions and that he reserved the right to use the so-called "nuclear option," though he hopes never to have to invoke it.

The option is controversial because it would end a filibuster on a judicial nominee through a procedural vote requiring only a simple majority, instead of the 60 votes required under Senate rules for cloture to close off debate.

Such a move probably would set a precedent and permanently change the Senate rule governing the filibuster in a way that effectively circumvents the requirement that only a two-thirds vote can change a rule.

Senators voted Tuesday to close debate on Owen's nomination after the bipartisan agreement ended a Democratic filibuster of her and two other nominees.

Perhaps Matthews's memory is a little fuzzy, and yes, Reid himself was not majority Democratic leader in President Bush's first term – he was majority Democratic whip, the second-in-command – but surely he should do his homework and not let an interview subject so blatantly mislead his audience.

Corrected from earlier: Republicans regained control of the Senate in 2003 and expanded their majority in 2005. Harry Reid was the Democratic whip in Bush's first term. I apologize for the errror.