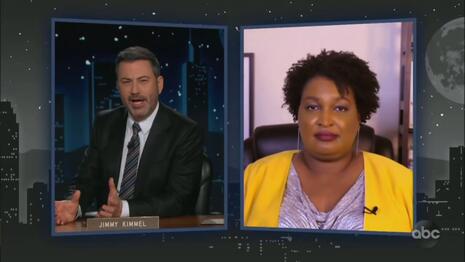 What do you get when a late night host asks Democrat Stacey Abrams if Donald Trump should concede? Hypocrisy is what Jimmy Kimmel showcased early Wednesday morning when Abrams joined in with mocking Trump for not conceding the election, despite the fact that she never conceded her own 2018 gubernatorial election. Despite being a late night entertainment show, Kimmel felt the need to trade in humor to advance the liberal hate for the President.

This was showcased by the leading question of the interview: “How many times do you think president trump has to lose Georgia before he concedes? We're up to three already.” The hypocrisy in the response was not even mentioned by the host.

In the past Abrams has made similar statements to what the President is currently making, remarking last year she wouldn’t concede the election because: “Concession means to say that the process was fair.” She has complained that the process was rigged by her opponent and that she would have won a fair election, a message she was trumpeting on the show.

Kimmel just breezed past this and set up Abrams for further attacks on her former opponent: “Are you surprised that Governor Kemp has not kind of capitulated to the President's demands?” Obviously Abrams would be completely objective about her former opponent she has accused of cheating.

While Kimmel eventually went back to comedy and actual entertainment, he first asked about the state of the election where he openly cheered Democratic efforts: “Obviously this was an exhausting campaign. And we're really -- really pulled out all the stops to get people to vote.”

This is not the first time that Kimmel has abandoned comedy to go after Trump and it probably won’t be the last. This interview did not more than showcase how far left entertainment hosts like Kimmel have gone in recent years.

This ABC “entertainment” was sponsored by Liberty Mutual and Noom. Click on the links to let them know what you think.

A transcript of the December 9th Coverage is included below:

KIMMEL: …How many times do you think president trump has to lose Georgia before he concedes? We're up to three already. [ Laughter ]

KIMMEL: I'm sure you're aware of this, but Republicans seem to be somewhat obsessed with you. Take a look at this video.

NEWT GINGRICH [Former Speaker of the House]: Republicans simply have to turn out more votes than Stacey Abrams can steal.

DONALD TRUMP: For whatever reason, your secretary of state and your governor are afraid of Stacey Abrams. They're afraid of her.

KIMMEL: Now, why -- do you agree that they are afraid of you?

ABRAMS: I don't try to plumb the depths of their minds. [ Laughter and applause ]

KIMMEL: Because you seem to be very nice. I don't know why they would be afraid.

KIMMEL: Yes, yes. [ Cheers and applause ] I think probably almost all of America agrees with that principle, but they are getting many confusing messages. Are you surprised that Governor Kemp has not kind of capitulated to the President's demands?

ABRAMS: This isn't about heroism or strength. This is about the law. A number of lawsuits have been filed that have forced the hand of the Secretary of State and the constitution precludes the Governor's intervention. We know that voter suppression is real. In fact action we were able to prove it in a court. I wrote a book about it, "Our time is Now." I did a film about it, "All in, the fight for democracy." We've got evidence, they have none. And the problem is, you have a hard time winning an argument when you have absolutely no proof that something happened. But I don't give them credit for heroism, I give them credit for being afraid of the law.

KIMMEL: Yeah. [ Applause ] And really for the principles on which this country was founded, that we each have a vote as an adult and we have a democracy. Who would have ever guessed that would be challenged in any way? Now we have the runoff election that is on January 5th. It comes down to these two seats that would tip the balance of the U.S. Senate. And there you are. And again, you are just trying to make sure that people are able to vote and that everything is done fairly. Was the first election done fairly?

ABRAMS: Yes, it was. We haven't defeated voter suppression, let's be clear. It still exists. In fact, Republicans here in Georgia are already discussing how they can reintroduce it coming in January when the legislative session starts again. But for now, we've been able to make it easier for eligible voters to cast their ballots. And nearly 5 million of them did. And Biden won. But more importantly, they forced a runoff, and I believe John Ossof and Raphael Warnock will also win because when people have a choice between two existing Senators who plundered and profited during this pandemic, and two who have done nothing but serve the people, I think the people of Georgia will make the right choice. [ Cheers and applause ]

KIMMEL: Obviously this was an exhausting campaign. And we're really -- really pulled out all the stops to get people to vote. Do you think that people are fired up in Georgia, that they are ready to do this, that they want to cast their votes?

ABRAMS: We had a wonderful statistic that came out today of the more than 1 million absentee ballots that have already been requested. 70,000 are from people who didn't vote in November. And they are disproportionately young and disproportionately people of color. These are the folks who are the least likely to turn out, and they understand what's at stake and they need to show up and fair fight is there with them to make sure their votes get counted.

KIMMEL: I guess this is one of the good -- the silver lining to all of the craziness that has gone on is that young people are getting out and voting in numbers that they haven't before.