Predictable: Tiresome CNNer Calls on Media to Double Down on Trump Hate 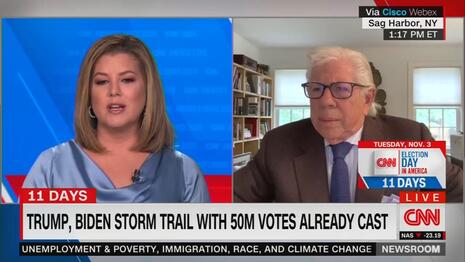 With the 2020 election less than two weeks away, the leftist media have been doing everything in their power to ensure President Donald Trump does not win reelection. So, in the day after the final presidential debate, Carl Bernstein called on the media to double down.

The journalist declared: “[A] lot is going to depend I think on the media and how we focus on the next 11 days, particularly about the issue of Donald Trump.”

Other than an outright endorsement, what else are they supposed to do? CNN host Brianna Keilar had Bernstein on Friday afternoon's CNN Newsroom where she was noticeably silent during these attacks. Bernstein gave his comrades several anti-Trump talking points: “[T]he pathological lying, the racism, the call to arms for his followers in the streets to almost provoke violence in our electoral process.”

It was unclear what more Bernstein wanted his fellow lefties to do. Already, the media has been involved in a four-year war against Trump and an MRC study showed the leftist networks have given far greater positive coverage to Joe Biden than they have Trump.

Just this week, CNN lined up several guests to plead with voters to dump Trump, called out his voters as ‘un-American’, and didn't pushback on the censorship of Hunter Biden stories. And that was this just this week.

Nonetheless, Bernstein also made this outlandish claim: “Trump once again is appealing to his base to get him close enough to winning that he can throw a monkey wrench into the electoral process if there is no win.”

This has been a regular attack from the media, which further belied the point that they're doing everything they can to attack the President.

CNN and other networks have already gone all out in attacking the President and it'd be ugly to see what else they could do.

P.S. Here is an example of some of the attacks over the past four years made by Bill D'Agostino.

This CNN bias was sponsored by Home Advisor and Walmart. Click on the links to let them know what you think.

A transcript of the October 23rd Coverage is included below:

BRIANNA KEILAR: Election day is around the corner. We are 11 days away. Right now, President Trump and former Vice President Joe Biden are hitting the campaign trail, looking to connect with undecided voters, and trying to energize their base. More than 50 million have already cast their ballots. The President is flying to Florida this hour to convince America's senior citizens to back him a second term. Seniors are a key voting block to usher Trump into the white house in 2016 and they could prove to be the tipping point in 2020. Biden is set to speak next hour in his home state of Delaware where he will outline his plans to defeat the pandemic and get unemployed Americans back to work. We're going to take you there live once he gets under way. And the final sprint for both men comes on the heels of last night's debate where they laid 8g starkly different visions for the future of the country. Joining me, political analyst Carl Bernstein. And you know, Carl, President Trump and the former vice President facing off last night for the last time before election day. This was the last pitch that a lot of Americans were paying attention to. What did you think? What was your take away from the debate?

CARL BERNSTEIN [CNN Political Analyst]: Trump once again is appealing to his base to get him close enough to winning that he can throw a monkey wrench into the electoral process if there is no win, unlikely that he will win a majority of votes in the electoral college demonstrably. Rather, people I talk to in the White House and elsewhere say his strategy is to undermine the electoral process to the point where he can draw this out through court challenges, through not accepting whatever the vote of the American people is, trying to cling to office through some other means. He's still in the ball game. He did not perform like he did in the first debate which was almost fatal to him. He was much more coherent than he usually is. And his Republican supporters are happy with what he did. At the same time, the question is, is this election as we have seen all along really about the character of Donald Trump and the covid crisis, the pandemic, his negligence in causing through his negligence deaths of hundreds of thousands of Americans. He is trying to move the debate away from that. And meanwhile, to energize his base with a kind of repeal, we're going to see, I have been told by those around the President in the next 11 days, we're going to see a scorched Earth campaign the likes of which the filthiest of the campaign conducted by Donald Trump, unlike anything we've seen in our history, get set is what I was told last night.

KEILAR: All right. Buckle up. Hold onto our hats and glasses. It will be a wild ride, as they say. One of the things I think we're hearing from normal people watching the election as they look back to 2016 is people who support Joe Biden or oppose President Trump are worried that even though polls may indicate positivity for Biden, they worry it could be missing something. And then folks that support President Trump say he defied expectations last time, he is going to defy expectations this time. Could we be surprised again?

BERNSTEIN: There's always room for surprise. Of course that's a possibility. But a lot is going to depend I think on the media and how we focus on the next 11 days, particularly about the issue of Donald Trump, what he and his rhetoric and his actions and words have been all about for almost four years now, the pathological lying, the racism, the call to arms for his followers in the streets to almost provoke violence in our electoral process. We're dealing with the President of the United States whose level of irresponsibility, recklessness, and lack of faith in the American process is coming dangerously close to a new kind of authoritarianism that we have never seen advocated by a President, something close to some peculiar Trumpian American neofascism. Those are the real issues in the campaign and I think most voters are aware the real issue is Donald Trump and his conduct. Can Trump energize his base enough to make this election close and Republican senators particularly who I talked to say that that's his real objective. Just get it close enough so that he cannot be forced to leave the white house with a clear victory for Biden and if that is the case, then he goes into causing a constitutional crisis. I think we need to look at his words and actions over the past month and into the next 11 days in terms of his willingness and enthusiasm for provoking a constitutional crisis if he can't get past 270 electoral votes which seems unlikely, whatever happened in the debate last night. The trajectory does not seem to have been changed notably, but his strategy is to cause such chaos that we are going to be very troubled in terms of how our institutions, how the electoral college, how Republicans in congress, how the system handles a challenge to the orderly and legal electoral process. Such as we’ve never seen. That also includes the kind of message he is sending as he did last night during parts of the debate to his followers, the kind of unfounded vicious charges, the kind of language that we have seen in the past month appeals to racism. As Biden said last night, much more than dog whistles, fog horns, toward racism, toward a kind of unacceptance of pluralistic America, the likes of which we have never seen. That's where we are, that's what we have to look at particularly in the media along with the coronavirus pandemic and his failure to act, his homicidal negligence in failing to act to save lives of Americans. As he told my colleague, Bob Woodward, he knew January 28th that we were facing the greatest national security crisis as he was told by his national security advisers that his presidency was going to see and he chose to not only ignore it in public but to pretend almost it didn't exist as he said so he would not cause panic in America.

KEILAR: Carl, we'll be watching the final days with you. It is wonderful to see you. Thank you so much for coming on.