Jon Stewart to Obama: ‘Are We Demanding Too Much of You?’

During his final appearance Tuesday night on the Daily Show, with Jon Stewart as host, President Obama was treated to a softball interview in which the retiring Comedy Central host worried: “Are we [the media] demanding too much of you?”

Stewart clearly seemed to sympathize with Obama over his poor relationship with the press and he spoke of Obama's “frustration sometimes with the media -- is the media, myself included, are we focused on the wrong things?”

The Daily Show host complained that the media weren’t focusing enough on what the administration wanted and he asked “[a]re we demanding too much of government? Are we too inflammatory? What is -- what is your feeling on it?”

Without naming names, the president claimed that some media outlets “get on my nerves more than others” he complained that media “gets distracted by shiny objects and doesn't always focus on the big, tough choices and decisions that have to be made and part of that is just the changing nature of technology.”

Stewart then asked Obama if he's "dealt appropriately with the media?” before he noted the media has its “problems” but then surprisingly questioned the president about his use of “talking points”:

Are they – they come from, but is that something that has, have people in government, have people in administration, has your office, have yourself, have you become too guarded in the way that you speak to the American people and to practice in the art of spin, that the conversation becomes meaningless.

After Obama touted his performance at a recent press conference on the Iran nuclear deal, Stewart surprisingly pushed back and noted that such confidence only occurred because it was “[o]n your terms, though, you feel really good about that deal.”

At the very beginning of the interview, the president lamented that the liberal comedian was “leaving before me” before he proclaimed “I’m going to issue an executive order. Jon Stewart cannot leave the show.”

JON STEWART: I’ve got a subject for you. Here’s a subject out of thin air.

OBAMA: First of all, the media's, you know, a bunch of different medias. There are some that get on my nerves more than others. I think that's fair to say. You know, I think I'm most concerned about is not that it's unfair or that it's too tough on government because I think that that's what journalism and media is supposed to be doing. I think it gets distracted by shiny objects and doesn't always focus on the big, tough choices and decisions that have to be made and part of that is just the changing nature of technology.

I mean, it is very hard now for folks to do an hour-long special on the other America, let's say or some of the other classic documentaries that were done a long time ago. It's tough to get everybody's attention focused in the same way and so, what that means is that on big tough issues, sometimes it's hard to get the entire nation's attention focused on it and we've been operating on soundbites, but look, part of my job and part of the job of everybody in the White House is, how do we adapt to this new environment? How are we more nimble? How are we dealing with social media? How do we deal more effectively?

STEWART: You've dealt appropriately with the media. We know maybe the media's problems. What about talking points?

OBAMA: Are they useful? What are those things? 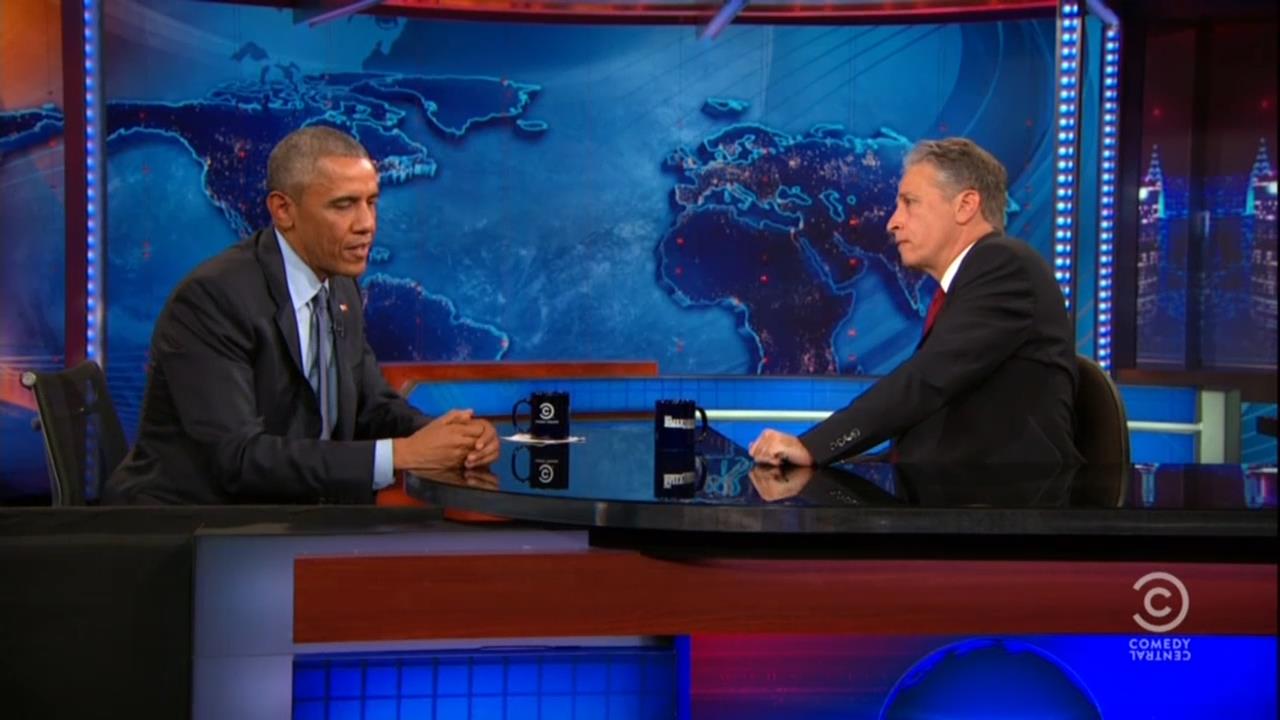 STEWART: Are they – they come from, but is that something that has, have people in government, have people in administration, has your office, have yourself, have you become too guarded in the way that you speak to the American people and to practice in the art of spin, that the conversation becomes meaningless.

STEWART: No that your talking points an be construed as either insincere or –

OBAMA: Here's what I say that I think when you are outside of government, you feel unconstrained in ways that when you are in the White House, you recognize, look, if I make this comment, it may move the market that way or if I make this comment, I've got to make sure what are our allies thinking about that international issue. So, probably early on, I think that you're more cautious.

I also think the structure inside the White House is not well adapted to this new environment and e were way too slow in trying to redesign and reengineer the White House press office so that we could have more unconventional interactions with the media and more long form, you put it on the web. You don't worry whether it's, you know, on a tight, two-minute package going on the nightly news. There's a learning process that's taken place, but I tell you what, Jon, overall, I don't feel particularly guarded. I mean, I just had a press conference about Iran where –

STEWART: Oh, you were wailing on people.

OBAMA: –  not only did I stay there for an hour, I said, you know, who else has got a question because –

OBAMA: Well, no, I think the truth of the matter is there's been a lot of times where I sat there and we talked a lot about stuff where I did not feel as good about what had happened, but I feel we have to be accountable. Overall, I think that the problem with our interaction with the media is probably overstated.

OBAMA: I think what's understated is the vulcanization, the splinting ring of the media so it's hard for us to get one conversation. You have folks who are constantly looking for facts that reinforce their existing point of view as opposed to having a common conversation and I think one of the things we have to think about, not just the president, but all of us is how do we join together in a common conversation around something other than the Super Bowl.