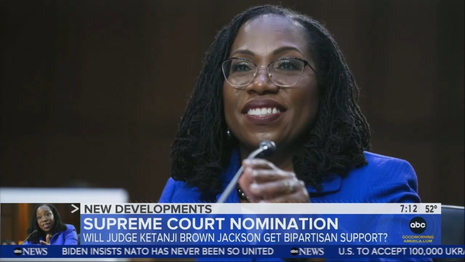 Well of course it has.

As the Supreme Court nomination of Judge Ketanji Brown Jackson proceeds, there is the Times instinctively reacting to what has been a decidedly civilized hearing with what can only be called the paper’s decided systemic racism. The Times headlined:

Judging a Judge on Race and Crime, G.O.P. Plays to Base and Fringe
Grilling Ketanji Brown Jackson, the first Black woman nominated to the Supreme Court, conservative senators painted her as a jurist who had coddled criminals and embraced “woke” education.

After Texas Republican Senator Ted Cruz had the nerve - the nerve! - to question Brown Jackson on her views of the decidedly racist “Critical Race Theory” and “insinuate that she was soft on child sexual abuse” the Times goes on to say:

The message from the Texas Republican seemed clear: A Black woman vying for a lifetime appointment on the highest court in the land would, Mr. Cruz suggested, coddle criminals, go easy on pedophiles and subject white people to the view that they were, by nature, oppressors.

Cruz’s “message” had zero to do with Brown Jackson being, as the Times described her “A Black woman.” Cruz’s point had everything to do with left-wing jurisprudence. The latter a longtime issue between left and right that has zero to do with race and has been raised in one Court nomination after another involving white nominees and the issue of crime.

Which is to say, the liberal complaint was that the conservative Bork was so tough on crime that he would enthusiastically support “rogue police (who) could break down citizens' doors in midnight raids.” The Cruz concern - the conservative concern about the liberal Judge Brown Jackson and any other liberal Court nominee of any color - is the reverse. The concern being that, in this case, Brown Jackson is, as the long-ago phrase from the 1960’s Nixon-era had it about liberals of the day, “soft on crime.”

The crime issue itself has nothing to do with race. Crime comes in all colors and races. Woven into American cultural legend is Mario Puzo’s 1969 bestselling classic The Godfather, centering on a Mafia family headed by the fictional Don, Vito Corleone. The Corleone family was, of course, lily white - as, in reality, were the real Italian Mafioso’s of the day. (And by the way, this past week- March 24th -  marked the 50th anniversary of the release of the iconic movie version. A classic then and now.)

Only last December of 2020, Fox News featured a story about the famous and decidedly white Mafioso Sammy "The Bull" Gravano, described by Fox as “the underboss of the Gambino crime family, the No. 2 to John Gotti.”

To the extent that race is an issue at all it is precisely because the Left - the Democratic Party in particular - has itself been built on a culture of racism. It is the very embodiment of systemic racism. The Democratic Party, history records, was founded by slave owners. Read the first six Democrat presidential platforms (1840-1860) and there, plain as day, is the party’s open endorsement of slavery. A majority of its members in the House and Senate voted against Republican Abraham Lincoln’s Thirteenth Amendment that abolished slavery, not to mention voting against the Fourteenth - which gave the freed slaves due process - and the Fifteenth, which gave blacks the right to vote. After the Civil War it was the Democrats who instituted segregation, building the entire racist framework of “Jim Crow Laws.” In today’s 21st century America, it is Democrats insisting on support for the son-of-segregation known as “identity politics” - in which all Americans are to be judged by race.

Joe Biden himself is an infamous practitioner of the systemic racism of the Democrats. Who can forget that in the 2020 campaign it was Democrat Biden telling the African American radio host Charlamagne tha God that “if you have a problem figuring out whether you’re for me or Trump, then you ain’t black.” Which is to say, Biden is the epitome of the white liberal belief that if you are black you must stay on the liberal plantation - or you “ain’t black.”

That, in sum, is exactly why the Left hated Clarence Thomas’s nomination for the Supreme Court, and ditto the Bush 43 nomination of the black Judge Janice Rogers Brown to the DC Circuit Court. They were black - but not liberals. They had walked off the liberal plantation - and the Left wanted them defeated. Indeed, Joe Biden himself filibustered Brown - twice.

This is exactly the real message of that front page story in the Times. Race - and systemic racism - was and remains central to the Times itself, which is exactly what is at play in this Times column on Ted Cruz and the GOP handling of the Brown Jackson nominee.

Over there in The New York Post in July of 2020, ex-Timesman turned Post columnist Michael Goodwin reminded in detail just how central racism has been to the Times culture. Goodwin’s headline:

Goodwin opened with the Times lecturing that the American presidents carved in stone on Mt. Rushmore were racists, including the slave owning Washington and Jefferson, and labeling Lincoln as “ ‘reluctant and late’ to issue the Emancipation Proclamation and (Theodore) Roosevelt ‘actively sought to Christianize and uproot Native Americans.’”

Then Goodwin lays out the Times own very long history of outright and decidedly systemic racism, saying in part:

Yet the Times has never applied to its own history the standards it uses to demonize others. If it did, reporters there would learn that the Ochs-Sulzberger family that has owned and run the paper for 125 years has a “complicated legacy” of its own.

That legacy includes Confederates in the closet — men and at least one woman who supported the South and slavery during the Civil War. In fact, Times patriarch Adolph S. Ochs contributed money to the very Stone Mountain project and other Confederate memorials the Times now finds so objectionable.

…Ten years after he (Times founding publisher Adolph Ochs) took over The New York Times, it ran a glowing profile of Jefferson Davis, the president of the Confederacy during the Civil War. The 1906 article was billed as a “Celebration of the Davis Centenary” and was published on “the anniversary of the great Southern leader’s death.

There’s more there - oh so much more.

But the essence in this space is that the reason The New York Times is making of the Brown Jackson nomination process a racism story is because for both the the Times itself, not to mention the Democratic Party and, in this case, the Democrat president Biden who nominated her, race and systemic racism is now and always has been at the very core of both the paper’s culture and the party’s culture.

And when they point the finger at Republicans - when the paper plays the race card - they are by default confessing who they really are and what they are really about: systemic racism.