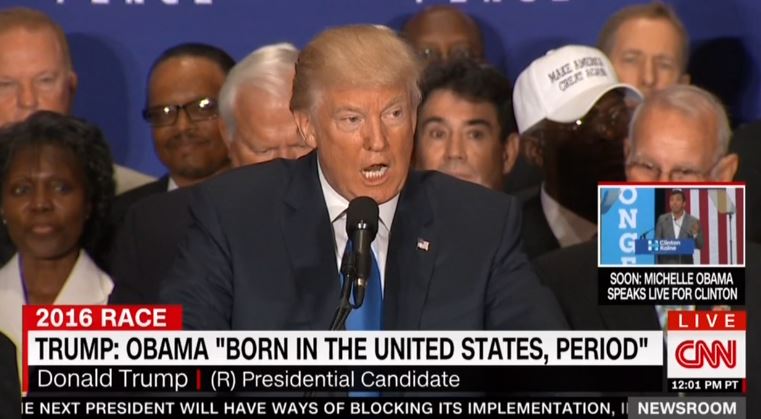 Ahhh the birther issue and the media. You just have to love the double standard.

In the middle of all the Donald Trump birther ruckus, there is one small detail that seems to be going unmentioned.

Here is the story as headlined by none other than the New York Times on February 28, 2008.

Accompanied by pictures of former Connecticut Senator Lowell Weicker, the late Michigan Governor George Romney (father of Mitt) and Arizona Senator Barry Goldwater there was also a drawing of the 19th-century President Chester Alan Arthur. Arthur, like all the others, was a Republican.  Among other things the article said this, bold print for emphasis:

“WASHINGTON — The question has nagged at the parents of Americans born outside the continental United States for generations: Dare their children aspire to grow up and become president? In the case of Senator John McCain of Arizona, the issue is becoming more than a matter of parental daydreaming.

Mr. McCain’s likely nomination as the Republican candidate for president and the happenstance of his birth in the Panama Canal Zone in 1936 are reviving a musty debate that has surfaced periodically since the founders first set quill to parchment and declared that only a “natural-born citizen” can hold the nation’s highest office.

Almost since those words were written in 1787 with scant explanation, their precise meaning has been the stuff of confusion, law school review articles, whisper campaigns and civics class debates over whether only those delivered on American soil can be truly natural born. To date, no American to take the presidential oath has had an official birthplace outside the 50 states.

…“There are powerful arguments that Senator McCain or anyone else in this position is constitutionally qualified, but there is certainly no precedent,” said Sarah H. Duggin, an associate professor of law at Catholic University who has studied the issue extensively. “It is not a slam-dunk situation.”

Mr. McCain was born on a military installation in the Canal Zone, where his mother and father, a Navy officer, were stationed. His campaign advisers say they are comfortable that Mr. McCain meets the requirement and note that the question was researched for his first presidential bid in 1999 and reviewed again this time around.

…Mr. McCain is not the first person to find himself in these circumstances. The last Arizona Republican to be a presidential nominee, Barry Goldwater, faced the issue. He was born in the Arizona territory in 1909, three years before it became a state. But Goldwater did not win, and the view at the time was that since he was born in a continental territory that later became a state, he probably met the standard.

It also surfaced in the 1968 candidacy of George Romney, who was born in Mexico, but again was not tested. The former Connecticut politician Lowell P. Weicker Jr., born in Paris, sought a legal analysis when considering the presidency, an aide said, and was assured he was eligible. Franklin D. Roosevelt Jr. was once viewed as a potential successor to his father, but was seen by some as ineligible since he had been born on Campobello Island in Canada. The 21st president, Chester A. Arthur, whose birthplace is Vermont, was rumored to have actually been born in Canada, prompting some to question his eligibility.

…Mr. McCain’s citizenship was established by statutes covering the offspring of Americans abroad and laws specific to the Canal Zone as Congress realized that Americans would be living and working in the area for extended periods. But whether he qualifies as natural-born has been a topic of Internet buzz for months, with some declaring him ineligible while others assert that he meets all the basic constitutional qualifications — a natural-born citizen at least 35 years of age with 14 years of residence.

“I don’t think he has any problem whatsoever,” said Mr. Nickles, a McCain supporter. “But I wouldn’t be a bit surprised if somebody is going to try to make an issue out of it. If it goes to court, I think he will win.”

Lawyers who have examined the topic say there is not just confusion about the provision itself, but uncertainty about who would have the legal standing to challenge a candidate on such grounds, what form a challenge could take and whether it would have to wait until after the election or could be made at any time.

In a paper written 20 years ago for the Yale Law Journal on the natural-born enigma, Jill Pryor, now a lawyer in Atlanta, said that any legal challenge to a presidential candidate born outside national boundaries would be “unpredictable and unsatisfactory.”

“If I were on the Supreme Court, I would decide for John McCain,” Ms. Pryor said in a recent interview. “But it is certainly not a frivolous issue.”

In fact, the birther issue that was raised around President Arthur was put into book form, as noted here at the Marquette University Law School. Notes the faculty blog of the Arthur story raised by the Times:

“The principal advocate of the “born in Canada” theory was Arthur’s fellow New York lawyer Arthur P. Hinman who was hired in 1880 by the Democratic Party to investigate Arthur’s ancestry.  Hinman initially undermined his owned credibility by embracing an argument that Arthur was himself born in Ireland and didn’t come to the United States until he was fourteen years old.  That story was patently false and easily disproven.

However, Hinman later discovered acquaintances of the Arthur family in Canada who told him the story of Arthur’s accidental Canadian birth.  Convinced that he now had proof of Arthur’s foreign citizenship, he published his findings in 1884 in a short book entitled How a Subject of the British Empire Became President of the United States.”

Hmmm. What two names did not make that New York Times story? That’s right….Barack Obama and Donald Trump.  There was not a word about the “birther” issue that today is swirling around Trump. Much less was there any indication that by raising the birther issue against white guys Arthur, McCain, Romney, Goldwater and Weicker the idea of raising the issue was somehow racist.

In other words? What we have here is a classic example of liberal media bias. If you are the New York Times, it is OK to raise the birther issue against John McCain in the 2008 campaign.  And it was OK in the past to accuse a sitting president or a presidential candidate or a  possible presidential candidate of not being born in America. And there was nothing in the least either racist or partisan in raising the birther issue against five white Republican guys. But to make the same accusation against Democrat and black Barack Obama (and for the record, I have always believed he was born in Hawaii in 1961)? Do that and you are an unmitigated racist partisan of the worst kind.