Imagine this scenario -- in the wake of yet another mass shooting by yet another lunatic who should have been committed but wasn't thanks to decades-long work by the ACLU, a celebrity known for his or her conservative views -- Jon Voight, for example, or Angie Harmon -- tells a reporter that he or she has decided to buy a gun for protection.

The histrionics from the left would be swift and predictably cliched ... The last thing we need is more people with guns! ... You're part of the problem, not the solution! ... Support the right to arm bears!

But when it is a liberal celebrity who states such a desire, the reaction from the left is ... as if nothing was said at all.

Case in point -- purported comedian Sarah Silverman's appearance on HBO's Real Time with Bill Maher over the weekend to celebrate receiving a star on the Hollywood Walk of Fame and tout her wretched Hulu series, I Love You, America, in which she obsessively trashes conservatives in the guise of being a unifying figure. Yeah, just like Obama:

MAHER: So, can I ask you about guns because we had another horrible tragedy this week, right here in California, very close to here (alluding to the mass shooting at the Borderline Bar & Grill in Thousand Oaks) and I know this is an issue that you have tweeted about a lot, talked about a lot, done on your show a lot. Is there anything new to say?

SILVERMAN: No, there's nothing new to say, there should be gun reform, whatever. I mean, the NRA is, you know, holding, I think it's a positive thing that a lot of Democrats beat grade A, NRA Republicans that have, you know, this midterms and they have F grades and it showed that it didn't matter. So, I mean, you know, it is, it's just kind of bananas but again we have a president who, you know, it's been exactly two weeks since he announced he was a nationalist and in that time there's been two mass shootings and 14 bombs sent to every single, you know, person that he targets in his speeches, his rhetoric over and over again. He knows that he can start a fight and he doesn't have to finish it because someone else will finish it for him and that's his role in domestic terrorism.

Cue the dutiful audience applause and Silverman's mock-humble shrug, "it sounded so smart." Right -- except not at all when her claim is peeled back even a little. Agreed, the accused pipe bomber is an over-the-top Trump follower, much as the gunman who tried to murder GOP congressmen at a softball practice last year was an MSNBC-addled Bernie bro -- but how did Trump "start a fight" with patrons at the Borderline dance hall or the congregants of the Tree of Life Synagogue?

Perhaps Silverman is alluding to Jews across the board or, more specifically, Israel -- both of which are even more of a stretch. Trump the alleged anti-Semite whose closest advisers include his beloved daughter who converted to Judaism and Orthodox Jew son-in-law. Trump, who moved the American embassy in Israel to Jerusalem -- wasn't there supposed to be a Mideast war over that by now? -- as vowed but never done by previous presidents. Trump, the president who ended the nuclear deal with Israel's mortal foe, Iran. Shouldn't Trump as anti-Semite be going out of his way to help Iran and not Israel?

It was at this point that Maher took an unexpected turn of the type that keeps conservatives in his audience:

MAHER: Now that the fascists are in the White House, though, I'm glad some liberals have guns (pregnant pause for effect).

SILVERMAN (taking the bait): Well, listen, I do, I think about having guns ... (crosstalk, Silverman then apologizing for interrupting Maher)

SILVERMAN: I think about it, I absolutely think about it, I should learn how to use a gun. I have mace that's always in my backpack and now I started sleeping with it close by, oh God, I didn't want to admit it but it's true. We're living in freakin' scary times. 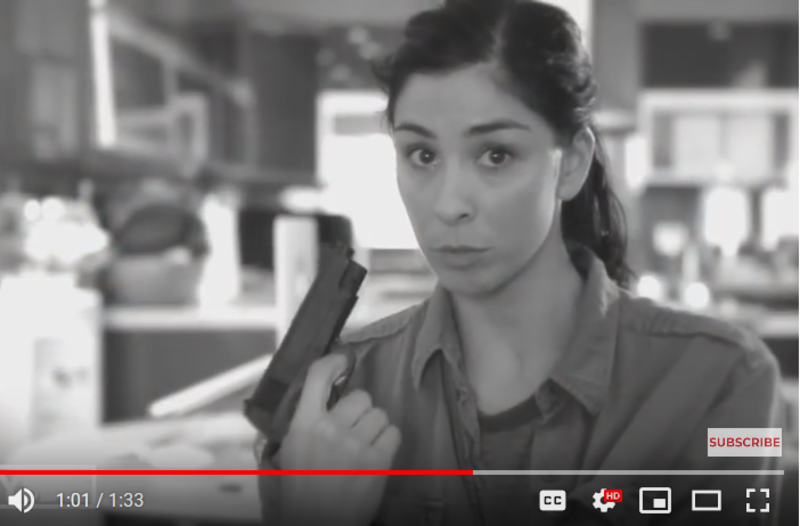 Wow, turns out she's rational after all, albeit belatedly. More along the same lines several minutes later while in discussion with New York Times columnist Bret Stephens:

STEPHENS: The only way a Republican is going to defeat Trump in a primary is if there is, say, a catastrophic war with North Korea or a devastating recession or some other kind of calamity. So none of those seem like very appealing ways to ...

SILVERMAN: What about tons of mass shootings on an epic scale?

STEPHENS: Well, the disgrace is that we shrug after, five days after each one of them and until we start thinking beyond, you know, tepid gun control measures and start rethinking the Second Amendment, that's going to go absolutely nowhere.

SILVERMAN: But who is we? Is it us or is it the people representing us who are taking money from the NRA and various places who aren't representing us?

MAHER: It's not just the NRA, though. Lots of people in America legitimately like their guns.

SILVERMAN: I f***ing love guns! (Tepid laughter from audience. Silverman, sensing the line bombed, covers her mouth and hunches over as if she just farted at a wedding).

MAHER: OK, well, there you go.

This from a professional lib who has demonized the NRA for years and has denigrated gun owners as "gun boners." Apparently Silverman now becomes positively aroused by the mere mention of firearms. But if packing heat is what Silverman needs to do to protect herself, so be it, all the more power to her.

Which brings to mind one of the key differences between conservatives and liberals -- conservatives believe that the Second Amendment applies to all law-abiding citizens, including liberals. Liberals believe it doesn't apply to anyone, especially conservatives.

Just remember, Ms. Silverman, NewsBusters reader that you are, now that you've finally decided that you and not The Government are mainly responsible for your personal security, it's the unending efforts of the NRA that has helped prevent other liberal gun grabbers from depriving you of your inalienable right to a firearm. Thanking the NRA for that is the least you can do.