Brace yourself, it's already begun -- The Purge. Only a week since Donald Trump's unlikely ascension to the presidency, he's already taking aim at the very heart of democracy, as those working in journalism so often claim they embody.

This is how it starts. First Trump stopped allowing reporters to wait for hours outside restaurants while he dined with his family. Next they came for the socialists (many of whom Trump already knew as reporters).

In a story that did little to hide their indignation, NBC reporters Alexandra Jaffe and Ali Vitali sent an unmistakable signal to the incoming Trump junta that they will not be ignored --

In a highly unusual move, President-elect Donald Trump on Tuesday night left his Manhattan residence without notifying the reporters covering him or giving any indication of where he was going. 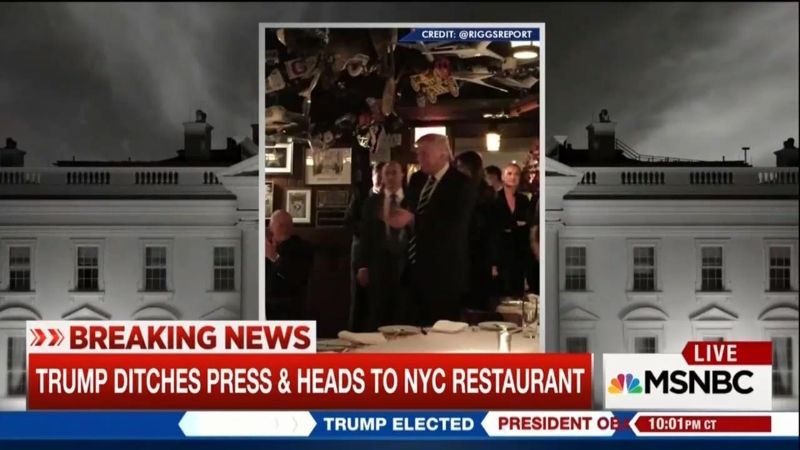 Not just unusual -- highly unusual. Doesn't this guy understand this is not the way things are done in the ancien regime? The nerve of that man, not asking people whose sole mission in life is to bring him down for permission to dine with his family.

Then came this curiously worded line --

The maneuver seemed to deliberately limit access to the media.

"To" the media -- or "for" the media? So much misdirection in such a small word. In the next paragraph, the intrepid reporters reveal how they "eventually" learned Trump's whereabouts --

The only way the press eventually ascertained his whereabouts was after a Bloomberg reporter, who happened to be dining at the 21 Club, tweeted a photo of Trump and some of his transition team in the Midtown steakhouse.

Hmm, turns out that media was already there -- social media. Yes, right there in the media epicenter of the universe, go figure. Determining Trump's whereabouts in the future when he ditches "the press" won't be a problem at all -- just tweet #WheresTrump?.

The NBC reporters wrote that Trump spokeswoman Hope Hicks informed them earlier in the evening that Trump had retired for the night, followed hours later with his "unannounced motorcade" and Trump's communications team not responding to emails from a plaintive pooler "requesting guidance."

The verdict from Jaffe and Vitali on the whole unseemly affair -- "With his Tuesday night actions, the Trump Administration is shaping up to be the least accessible to the public and the press in modern history." Yes, it hasn't been this bad since the current administration.

Disgraced anchor/aspiring comedian Brian Williams led with this as BREAKING NEWS on The 11th Hour last night. To his credit, Williams pointed out the awkward fact that Bill Clinton "loved giving reporters the slip."(And wasn't it endearing when Kevin Kline did it in Dave?) NBC reporter Hallie Jackson agreed with Williams, but said there's a larger issue at stake. When a person is elected president, the media "act as a conduit to the American people," Jackson explained, "so that everybody in the nation knows where he is."

Why is important? Because, Jackson said, "people want to know where you are, God forbid, in case of a potential worst case scenario."

Yes, many reporters covering Trump want to be there, just in case, wink wink, nudge nudge. I mean, like, really really want to be there. It would be so important -- for democracy! -- to have a record of that, and from every possible angle.

Reaction on Twitter to NBC News stamping its feet was withering --

@andrewz12 Is it just me or is the press unbelievably entitled and invasive?

@100%FEDUP! DONALD TRUMP DITCHES THE PRESS To Do Something Really Fun ... and Normal

@JoePCunningham Why in the hell does the press think it's entitled to watch a man eat dinner with his family?

@Jeff_Jacoby If there were a Pulitzer Prize for clueless self-satire, NBC would clinch it with this headline. (referring to the one cited in this post.

Lastly, this from the inimitable Andrew Klavan by way of his Facebook page -- "Hey Look, The Onion has merged with NBC 'News'!"