They’re Trying Too Hard: Like Lincoln and FDR Before Him, Biden Is Saving Democracy 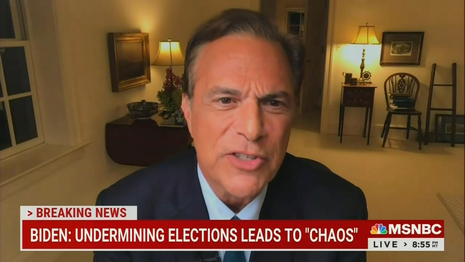 President Joe Biden desperately needs political resuscitation and his leftist buddies in the press have spent the last few weeks bucking him up. Most recently they praised his September 1 address as they compared him to Abraham Lincoln during the Civil War and FDR during WWII — this of course casts the GOP in the role of racist Confederates and Nazis.

CNN correspondent Eva McKend hailed Biden’s “reclaiming patriotism” from the Republicans. MSNBCers Willie Geist and Jonathan Lemire declared Biden was “on a roll,” rescuing America from the “freaks” and “weirdos” in that other party.

The passing of Mikhail Gorbachev granted longtime journalists like NBC’s Andrea Mitchell one final time to fondly reminisce about their favorite former Soviet dictator as they falsely credited him (and not Ronald Reagan and Margaret Thatcher) with ending The Cold War.

Speaking of The Cold War — It’s been almost that long since filmmaker Rob Reiner had a genuine hit. Nowadays he occupies his time tweeting nonsense like this: “If you want Autocrats…. vote Republican.”

The following are just some of the most outrageous outbursts from lefty journalists and celebrities from the past month:

“Joe Biden is saying, ‘Here we are, I am president, but the democracy is in peril, like 1860, like 1940. We are in a situation where few things go the wrong way, we could lose our system, our rule of law, our free and fair elections.’ And I think one thing that makes presidents look very good in history is when they stand up to that moment and say, you know, ‘This is what it is. Fish or cut bait, maybe all lose as a result.’ 1860 Lincoln was running through election, said country can’t last half slave and half free. Roosevelt in 1940 was saying, ‘I know a lot of people are terrified of losing their sons, but we may have to stand up against Hitler. I’m saying this even though I might lose.’”
— MSNBC presidential historian Michael Beschloss on MSNBC’s The Last Word with Lawrence O’Donnell, September 1.

“Something else that really stuck out to me is that he [President Joe Biden] almost seemed to sort of be reclaiming patriotism. Often you hear Republicans argue that they are the pro-America party. Right? The Democrats are not patriotic enough. But what was more pro-USA than this speech?”
— Correspondent Eva McKend on CNN’s Anderson Cooper 360, September 1.

“2021 was not a good year for Joe Biden and 2022 is starting to shape up to be pretty good. He got gasoline prices down, the Roe decision, you know, the overturning of Roe v. Wade was an apocalypse in the Democratic world but Biden’s able to say ‘Get behind Democrats or this is what you’re going to get.’...He’s seen now as a commander-in-chief dealing with the Ukraine, climate crisis everywhere, forests burning across America….So we see Biden being like ‘Fighting Joe Biden of Scranton’ this past week.”
— CNN presidential historian Douglas Brinkley on CNN’s Inside Politics with John King, September 1.

Biden “On a Roll” Against GOP’s “Freaks” and “Weirdos”

Co-host Willie Geist: “Freaks, weirdos and insurrectionists....This is who they [Republicans] are, this is what they’re doing, and the President effectively was saying that yesterday….[Joe Biden] is stepping into this place right now where a lot of Americans are. Where things seem like they're going off the rails on one side of the aisle.”...
MSNBC’s Way Too Early host Jonathan Lemire: “You have President Biden, who is, quite simply, on a roll. Democrats have momentum. They have the wind at their back. A series of legislative wins….There’s just a new energy. White House aides I’ve spoke to say the place feels revitalized. They feel like, as we hit Labor Day, the stretch run of this campaign, Democrats love where they are. And they’re painting Republicans as being out of touch with mainstream Americans on a number of issues.”
— MSNBC’s Morning Joe, August 31.

The Final Gorbasms: Refusing to Give Reagan Credit for Ending the Cold War

Anchor Lester Holt: “Remembering Mikhail Gorbachev, the last leader of the Soviet Union credited with lifting the Iron Curtain….As Russia’s war with Ukraine grinds on, there is a passing of note tonight. Mikhail Gorbachev, the last leader of the Soviet Union who oversaw the end of the Cold War has died at 91. Andrea Mitchell now on his legacy.”
Correspondent Andrea Mitchell: “Mikhail Gorbachev, the communist leader whose brief six-year reign transformed the map of Europe and the world. The first Soviet leader with a larger vision for his country. And who was willing to hold a summit with Ronald Reagan, the American president who called the Soviet Union an evil empire.….Americans were charmed by this new kind young Soviet leader with his ideas of glasnost and perestroika, openness and economic restructuring and his very modern wife Raisa….Mikhail Gorbachev, the man who changed the world but could not save his own country from falling apart.”
— NBC Nightly News, August 30.

“Mikhail Gorbachev, the last leader of the Soviet Union. Rising to power after seven decades of communist rule. He helped end the Cold War. Breaking the mold of the Soviet leaders before him, he was outgoing, charming those he met.”
— Host David Muir on ABC’s World News Tonight, August 30.

“A lot of Republicans have talked about dealing with waste fraud and abuse. The current head of the IRS, who is a Trump appointee said he didn’t have enough people….that the biggest problem we have is people don’t pay the taxes that they’re supposed to pay. If you are upset about extra IRS agents, stop cheating on your taxes.”
— Moderator Chuck Todd on NBC’s Meet the Press, August 21.

“It’s always said, this was the most important election in our history. Well, it’s pretty close to it. And I would say to our friends, who are watching us today: vote as if your life depends on it. Because it might.”
— MSNBC presidential historian Michael Beschlsoss on MSNBC’s The Sunday Show with Jonathan Capehart, August 15.

“If, you know, a historian from 50 years from now were to go back and visit America in 2022, the overwhelming question is, are we going to have a democracy in a year or two? Are we going to have free and fair elections with all those state officials and state legislatures threatening to say, we’re going to just name the winner whoever we feel like. Are we going to have rule of law?”
— MSNBC’s presidential historian Michael Beschloss on MSNBC’s Morning Joe, September 2.

“I think a lot of people do want to see you know, Donald Trump, you know, handcuffed like an episode of COPS and walking out….We want to see a perp walk, Donald Trump!...This could really be a situation where you’re a traitor! He is actually a traitor to America….If it is confirmed that he was trafficking our information around nuclear weapons, which is a huge deal, what might the punishment for something like that be?”
— Host Tiffany Cross on MSNBC’s The Cross Connection, August 13.

“We’re seeing a lot of violent rhetoric from Fox News, saying ‘It’s war, you’re — you are under attack.’ So, they’re very much doing this in a reckless way that has the ability to foment violence….In this sense, the last 24 hours does tie into what I’ve been writing about the last 25 years, because we’ve had these repeated episodes of violent rhetoric from the Republicans and from conservative TV and radio that have resulted in protracted periods of violence. And there’s a lot of concern that we may be headed, here in the United States, for another, say, Oklahoma City bombing of the 1995 variety.”
— Washington Post columnist Dana Milbank on PBS’s Amanpour and Company, August 10.

“You could hear even before the decision came down from the Supreme Court, you could hear during their arguments that the conservatives, Brett Kavanaugh particular, made a big point of saying, ‘if we just send these issues, these hard issues like abortion back to the states, we can just let the people decide.’...It’s the legislature that’s deciding. And the legislatures in a number of American states no longer reflect the will of the people. That’s why we talk about torching democracy. The people have one opinion, the general public, if you look at polls, feels one way. But the legislatures are way out of sync with what the population, in general, believes.”
— The New Yorker writer Jane Mayer on PBS’s Amanpour and Company, August 11.

Good Morning, We’re All About to Become Extinct

“Good morning. I’m Jane Pauley, and this is Sunday Morning. Searing heat, massive wildfires, catastrophic flooding. Unequivocal evidence the United Nations says that climate change is real and that human activity is its primary cause. So how bad can it get? According to some scientists, the possibility of worldwide societal collapse or even eventual human extinction isn’t out of the question.”
— Host Jane Pauley on CBS Sunday Morning, August 7.

“It’s simple. If you want dedicated qualified people to run our Government, vote Democrat. If you want Autocrats who have no problem using deadly force to overthrow it, vote Republican.”
— August 22 tweet by filmmaker Rob Reiner.