Get Ready for Puffball Coverage of Ketanji Brown Jackson in 3...2...1 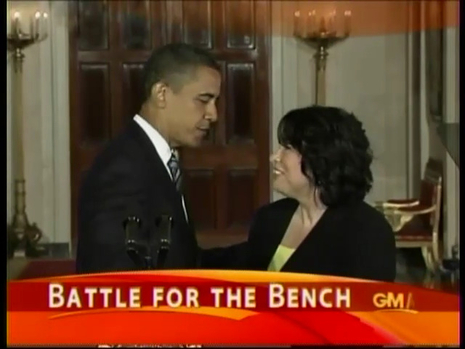 If coverage of Judge Ketanji Brown Jackson’s hearings (set to begin on Monday) is anything like what Barack Obama’s Supreme Court nominees faced, expect the liberal media to do everything they can to pave the way to an easy confirmation for President Joe Biden’s pick.

The puff pieces began as soon as Judge Jackson was nominated. ABC’s Robin Roberts introduced a glowing Good Morning America profile: “We are talking with her lifelong friends sharing what they want us to know about their dear friend who’s on the cusp of history.”

Correspondent Deborah Roberts chatted with Jackson’s college buddies: “They kind of pulled back the curtains on the life of Judge Jackson. They call themselves The Ladies during their college days, a tight group of friends who had each other’s backs during the college days. There were parties and fun moments, they say, but it was clear their spirited friend Ketanji, who had been a standout student, was going to go far.”

Certainly a far different reception than the hatchet jobs that conservative Justices like Brett Kavanaugh and Clarence Thomas received.

When they weren’t singing the praises of their backgrounds, or even comedic stylings, liberal reporters and anchors tried to downplay the leftist leaning of Elena Kagan, Sonia Sotomayor and Merrick Garland.

NPR’s Nina Totenberg swooned over Kagan’s “spectacularly successful” academic background while ABC anchor George Stephanopoulos was taken with her sense of humor “If this Supreme Court thing doesn’t work out, she’s got another career in stand-up.” The only issue seemed to be Kagan’s ideology, as NBC’s Peter Alexander brought up the concern that Kagan  “may not be liberal enough.”

Even though Merrick Garland was never confirmed, he was initially deemed the “perfect pick” by NBC’s Chuck Todd because the Republicans would have a tough time denying the judge a hearing because he was such a political “moderate,” as Lester Holt and ABC’s Terry Moran labeled him.

According to Katie Couric, Sotomayor’s ideology was even tougher to pin down, as the then-CBS anchor laughably claimed: “Pundits usually label judges as either liberal or conservative, but that won’t be easy with Judge Sotomayor.”

The following is a collection of some the most egregious examples of liberal reporters and anchors doing their best to pave the way for Obama’s nominees:

“We know she [Supreme Court nominee Elena Kagan] was a spectacularly successful dean at Harvard Law School where she was the first female dean — that she just moved the place, got it really moving again. Students loved her. She knocked heads on the faculty to get hires done. She was a spectacularly successful policy bureaucrat in the Clinton White House.”
— NPR’s Nina Totenberg on Inside Washington, May 14, 2010.

Legal correspondent Nina Totenberg: “In some ways, the descriptions of Elena Kagan as dean sound a little bit like the beginning of the old Superman TV series.”
Introduction to 1950s version of Superman: “Superman, who can change the course of mighty rivers! Bend steel in his bare hands!”
Totenberg: “Translate that to Harvard, and you can almost hear the music. [Superman theme music in background] Kagan, who can raise money by the millions! Kagan, who can end the faculty wars over hiring! Kagan, who won the hearts of students!”
—  Report on NPR’s Morning Edition, May 18, 2010.

“When she worked for the Clinton administration, Ms. Kagan asked the President to support a ban on all abortions of viable fetuses except when the mother’s health was at risk. And some analysts have used that example to show that she may actually shift the Court to the right, compared with Justice Stevens.”
—  CBS’s Maggie Rodriguez to Senator Jeff Sessions (R-AL) on the May 11, 2010 Early Show.

“Who is really most frustrated with the pick? It seems as many liberal groups are upset by this as are conservatives....On the left, she may not be liberal enough —  that’s the complaint there. Some progressives say she’s too much of a blank slate to know how she stands on any issue.”
—  Anchor Peter Alexander during the 10am ET hour of MSNBC Live, May 11, 2010.

“The selection of Solicitor General Elena Kagan to be the nation’s 112th justice extends a quarter-century pattern in which Republican presidents generally install strong conservatives on the Supreme Court while Democratic presidents pick candidates who often disappoint their liberal base. Ms. Kagan is certainly too liberal for conservatives, who quickly criticized her nomination on Monday as a radical threat. But much like every other Democratic nominee since the 1960s, she does not fit the profile sought by the left, which hungers for a full-throated counterweight to the Court's conservative leader, Justice Antonin Scalia.”
— New York Times reporter Peter Baker in a May 11, 2010 front-page “news analysis.”

News anchor Juju Chang: “The real question, George and Elizabeth, is who is going to play her in the SNL skit?”
Co-anchor Elizabeth Vargas: “Oh, it’s ripe for it, isn’t it? Although, I don’t think they could be as funny as Elena Kagan was!"
Co-anchor George Stephanopoulos: “Yeah, if this Supreme Court thing doesn’t work out, she’s got another career in stand-up.”
—  ABC’s Good Morning America, June 30, 2010.

Anchor Diane Sawyer: “For the first time, Americans got to see the woman President Obama called a ‘trailblazer’ in action....”
Correspondent Jonathan Karl: “A confirmation hearing isn’t usually a laughing matter, but if we learned one thing about Elena Kagan today, it’s that she has a sense of humor.”
— ABC’s World News, June 29, 2010.

Host Al Hunt: “Margaret, if you were a Senator, would you vote for Elena Kagan?”
Bloomberg’s Margaret Carlson: “Um, twice if I could....She just excelled. It’s been so long since I’ve seen anyone in public life joyful about being there, and that was what was infectious about the hearings. When Lindsey Graham asked her about the Christmas Day bomber, he then switched with, ‘Where were you on Christmas?’ And she said, ‘Like all Jews, I was at a Chinese restaurant.’ She just said it right out. It brought the house down.”
—  Bloomberg’s Political Capital, July 2, 2010.

“She was intellectual, yes, but also full of personal charm, say colleagues, and a determination to be open-minded. It [Harvard Law School] is an institution usually resistant to change, some might say an immovable object, until it was confronted with the irresistible force of Dean Elena Kagan....Colleagues argue Kagan’s style is just what the Court needs.”
—  ABC's Claire Shipman on Good Morning America, June 28, 2010.

“Not too many years ago, some Republicans paid a heavy price for being tough with Anita Hill when she came to testify in the Clarence Thomas hearings. Have we gotten past that era of sensitivity about a bunch of guys going after a single woman here, just bashing her?...Can these guys like Jeff Sessions just go at her like this without any fear of rebuke?”
— MSNBC’s Chris Matthews during live coverage of the Kagan confirmation hearings, June 28, 2010.

“Where does she stand? Liberal activists voicing concerns over Supreme Court nominee Sonia Sotomayor and her stance on abortion. This morning they’re demanding to know if she’s pro-choice or pro-life - and why President Obama never asked.”
—  NBC’s Matt Lauer opening Today, May 28, 2009.

Anchor Katie Couric: “Pundits usually label judges as either liberal or conservative, but that won’t be easy with Judge Sotomayor...”
Correspondent Wyatt Andrews: “[President Obama] has found a judge with 17 years experience, but no clear ideology on discrimination, gay rights, or abortion, and who can’t be easily defined by political labels.”
—  CBS Evening News, May 27, 2009.

Co-host Diane Sawyer: “The battle begins: How will President Obama’s Latina powerhouse handle the opposition?”...
Correspondent Claire Shipman: “Even as a little girl, growing up in a drug-ridden South Bronx housing project, stricken with juvenile diabetes, she had that trademark knack: instead of seeing dead ends, young Sonia saw possibilities; instead of giving up, she investigated every angle....She’s also an avid Yankees fan, a mean guacamole maker, and a fierce biker.”
— ABC’s Good Morning America, May 27, 2009.

Bob Schieffer: “This woman has a life story that you couldn’t make up! I mean, you know, she’s born in the public projects, in the shadow of Yankee Stadium, a single parent household, she goes to a Catholic school, she gets scholarships to the best schools in the country, Princeton and Yale, she overcomes all that while dealing with diabetes all her life, and she is Hispanic....This was the political advisor’s dream candidate.”...
Anchor Katie Couric: “It is a very, as you say, very, very compelling life story.”
— Exchange during CBS’s live coverage of Obama’s selection of Sotomayor, May 26, 2009.

“On the bench he’s been a moderate, voting to uphold environmental laws but often tough on criminals....”
— NBC News Justice correspondent Pete Williams, moments later on the same broadcast.

“As a judge, Garland is known as a moderate on the appeals court, though he would tip the balance of the Supreme Court by replacing staunch conservative Antonin Scalia.”
— ABC’s Terry Moran on World News Tonight, March 16, 2016.

Marveling at the Perfection of Obama’s Pick

“He [Judge Merrick Garland] is the perfect pick if they ever have to have one with a Republican Senate....He is putting real pressure on the Republicans to sit here and stick by this pledge that they’re somehow not going to even have a hearing....I think he made the perfect pick.”
— NBC’s Chuck Todd during live coverage of President Obama’s announcement of Garland as his choice for the Supreme Court, March 16, 2016.

Host Chris Matthews: “Do you think people look at this as another one of those boots in the face to the President on the racial front? First of all, he’s a birther, he’s not legitimate. Now, we’re not going to give him a chance to name a Supreme Court nominee.”
American Urban Radio Networks correspondent April Ryan: “Of course, yeah. I call it ‘blacklash.’”
— Exchange on MSNBC’s Hardball, March 16, 2016.