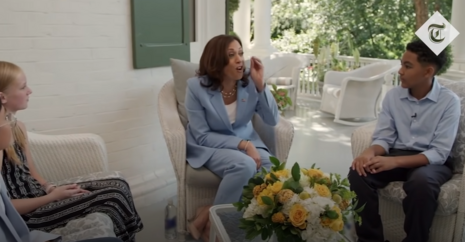 If a Republican Vice President (think Mike Pence, Dick Cheney and Dan Quayle) had put up as many “L’s” in their first year in office as Vice President Kamala Harris has, you’d better believe the Big Three network (ABC, CBS, NBC) evening news broadcasts would have flooded their shows with stories about the bumbling VP.

But because the network evening news shows are so in the tank for the Joe Biden administration they’ve almost COMPLETELY ignored some of Vice President Harris’s most embarrassing mishaps, gaffes and scandals in her just one year in office. Honestly, some of the gaffes are so laughable Harris and her office could give HBO’s fictional Veep character Selina Meyer a run for her money.

Instead of highlighting the Vice President’s failures the press has mostly swooned over Harris, but don’t tell her that. Harris has reportedly complained about the coverage. The complaint is laughable given how many times the network evening news shows have whistled past her mistakes, mishaps, scandals and gaffes in the last year.

The following is a look at how the broadcast evening news shows (ABC’s World News Tonight, NBC Nightly News, CBS Evening News) have covered or, more accurately, BURIED Harris’s most embarrassing moments in the past year:

On February 15, the New York Post reported the following:

​Vice President Kamala Harris ​is claiming in a new interview that the Biden administration is “starting from scratch” to develop a ​national ​vaccine distribution plan because former President Donald Trump​ left them with nothing​, ​contradicting comments from Dr. Anthony Fauci, who disputed that contention last month. “There was no national strategy or plan for vaccinations, we were leaving it to the states and local leaders to try and figure it out,” Harris told ​”Axios on HBO” Sunday evening. “In many ways, we are starting from scratch on something that’s been raging for almost an entire year,” she added.
…
But Fauci, chief medical adviser to President Biden, was asked during a White House briefing on Jan. 21 whether the coronavirus team was beginning from scratch with vaccine distribution or whether it is building on what the Trump administration began.

“W​e certainly are not starting from scratch because there is activity going on in the distribution,” Fauci said.​ 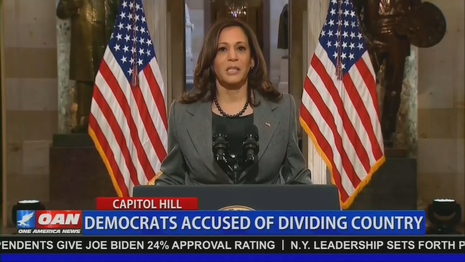 On January 6, 2022 the New York Post reported the following:

Vice President Kamala Harris caused outrage Thursday by comparing the Jan. 6 Capitol riot to the Japanese attack on Pearl Harbor in 1941 and the Sept. 11 attacks on New York and Washington by al Qaeda terrorists. “Certain dates echo throughout history, including dates that instantly remind all who have lived through them where they were, and what they were doing when our democracy came under assault,” Harris said in remarks at the Capitol’s Statuary Hall on Thursday morning. “Dates that occupy not only a place on our calendars, but a place in our collective memory: December 7, 1941, September 11, 2001, and January 6, 2021,” Harris added. Critics immediately slammed the vice president, accusing her of a hyperbolic lack of historical perspective.

Harris Nods Along to “Truth” of Israel “Genocide” Smear

On September 30, Politico reported the following:

Vice President Kamala Harris’ office is working behind the scenes to mend relationships with pro-Israel Democrats after not pushing back on a student who, in asking her a question, accused Israel of “ethnic genocide.”
…
The incident involving Harris took place on Wednesday, when a student attending an event with the VP to promote voting, said that Israel was conducting an “ethnic genocide” in Palestine and felt that the U.S. was ignoring protests even though Harris had been discussing the power of demonstrating. Harris responded: “Your voice, your perspective, your experience, your truth cannot be suppressed, and it must be heard.”

Israeli news outlets jumped on the comments. “VP Harris to student who accused Israel of ‘genocide’: Your truth must be heard,” went the headline in The Jerusalem Post. The Times of Israel also chimed in: “Kamala Harris doesn’t reject US student’s ‘ethnic genocide’ claim against Israel.”

Harris FALSELY Claims: “We’ve Been to the Border”

On June 8, FoxNews.com reported the following:

Vice President Kamala Harris falsely claimed that “we’ve been to the border” when pressed on why she has not yet visited the southern border after being tasked by President Biden to handle the “root causes” of migration.

During an interview with NBC News Tuesday, Harris, who has been criticized by Republicans for not making the trip to the U.S.-Mexico border, was asked whether she had any plans to do so. 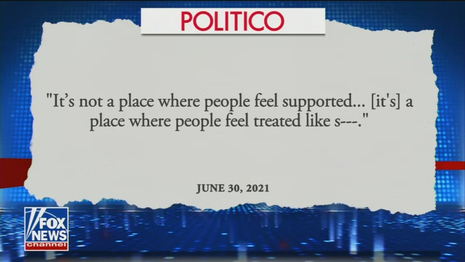 On June 30, Politico reported the following:

Harris’ team is experiencing low morale, porous lines of communication and diminished trust among aides and senior officials. Much of the frustration internally is directed at Tina Flournoy, Harris’ chief of staff, a veteran of Democratic politics who began working for her earlier this year.

In interviews, 22 current and former vice presidential aides, administration officials and associates of Harris and Biden described a tense and at times dour office atmosphere. Aides and allies said Flournoy, in an apparent effort to protect Harris, has instead created an insular environment where ideas are ignored or met with harsh dismissals and decisions are dragged out. Often, they said, she refuses to take responsibility for delicate issues and blames staffers for the negative results that ensue.

The dysfunction in the VP’s ranks threatens to complicate the White House’s carefully crafted image as a place staffed by a close-knit group of professionals working in concert to advance the president’s agenda. It’s pronounced enough that members of the president’s own team have taken notice and are concerned about the way Harris’ staffers are treated.

Harris Hires Kid Actors to Pose With Her 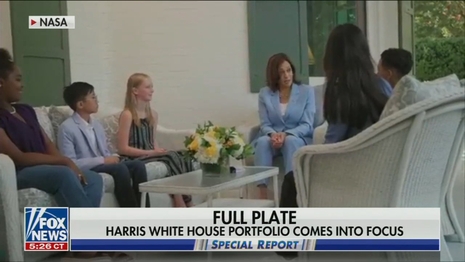 On October 11, 2021 the Daily Mail reported the following:

Grinning school-age children who took part in a NASA YouTube video about space exploration with Kamala Harris have been revealed to be child actors. The “Get Curious with Vice President Harris” video was filmed in August and tweeted out by the Vice President on October 7 to celebrate World Space Week. It appeared to viewers that the children she was with were all normal kids.

However it has now been revealed that they are paid actors who auditioned by sending in a monologue and three questions they would ask a world leader. Critics of Harris have leapt on the video, with the mockery compounded by the revelation that it was produced by Canadian company 'Sinking Ship Entertainment'.

Monterey resident Trevor Bernardino, 13, told KSBW he was stunned when he learned he would be traveling to Washington, DC to take part in the video. “Then after that, like a week later my agent called me and was like ‘Hey Trevor you booked it,’” he told the network.

Trevor was one of five teens who participated in the video for the YouTube original series. He was joined by Derrick Brooks II, another child actor, Emily Kim, likewise a child actor, Zhoriel Tapo, a child actor and aspiring journalist who has interviewed former First Lady Michelle Obama, and Sydney Schmooke.

The video was shot at the Naval Observatory, Harris’ residence, from August 11 to August 13. During that time the Taliban were making rapid advances across Afghanistan and were closing in on Kabul during the chaotic U.S. withdrawal. 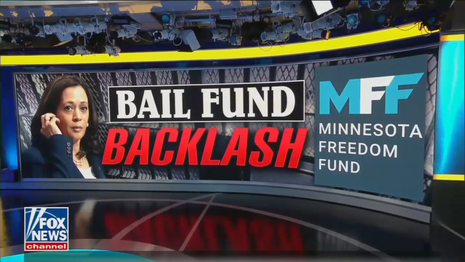 On September 7, The Washington Free Beacon reported the following:

“We are aware of reports of the tragic and fatal shooting in Minneapolis earlier this week allegedly involving George Howard, an individual the Minnesota Freedom Fund had previously provided with bail support,” the group said Friday. “MFF believes that every individual who has been arrested by the law enforcement is innocent until proven guilty, and if a judge deems them eligible for bail, they should not have to wait in jail simply because they don't have the same income or access to resources as others.”

Harris faced criticism on the 2020 campaign trail after she urged her followers to “chip in now” to the Minnesota Freedom Fund “to help post bail for those protesting on the ground in Minnesota” days after George Floyd’s death. According to American Bail Coalition executive director Jeffrey Clayton, the group “definitely got a windfall” in the wake of the Democrat’s endorsement, raising a staggering $35 million as violent protests swept the nation.

Just a fraction of the bail money, however, was used to release protesters and rioters. In the months following Floyd's death, the Minnesota Freedom Fund spent nearly $3.5 million bailing people out of jail—just $210,000 went to those who participated in the unrest, Fox News reported in 2020. The group helped release heinous criminals, such as Timothy Wayne Columbus, a 36-year-old man who allegedly penetrated an eight-year-old girl.

On March 24 the New York Post reported the following:

Vice President Harris is being slammed over her decision to appear with former President Clinton for a Clinton Foundation event focused on empowering women amid the Covid-19 pandemic, given Clinton’s alleged history of sexual abuse.
…
After news of the event circulated Tuesday, social media lit up with reactions to Harris’ choice — particularly as the first female vice president — to appear alongside a man accused by Paula Jones in 1991 of sexual harassment and of rape by Juanita Broaddrick in 1978. Clinton has denied both claims, and both women have stood by their stories for decades.

Two other women, Kathleen Willey and Leslie Millwee, have also accused the 42nd president of sexual assault, both of which Clinton has also denied.
…
In response to news of Harris’ appearance with Clinton, Broaddrick tweeted her shock, asking, “Is this a f–king joke? This pervert,” she began, “who raped me…is going to talk about empowering women.” “Inviting Bill Clinton to speak on Empowering women,” Broaddrick then wrote on Wednesday afternoon, “is like asking Jeffrey Dahmer to host a cooking class,” she continued, referencing the noted serial killer.

Broaddrick was not the only woman to express her outrage.

One of Jeffrey Epstein’s sex trafficking victims hit out at Vice President Harris for planning to take part in a women’s empowerment seminar with former President Bill Clinton, a onetime pal of the convicted pedophile.

“Wow!! She’s asking Clinton how to empower women???” Virginia Giuffre tweeted on Wednesday, “Wrong person, what she should be asking him is what the hell was Clinton doing on #Epstein island & private jets 27 TIMES!”

Clinton has faced considerable scrutiny over his years-long association with Epstein and his alleged madam Ghislaine Maxwell.

While he denies any involvement in or knowledge of the pair’s horrific sex crimes, it is widely understood that Clinton maintained his friendship with at least Maxwell as recently as 2014, years after Epstein’s pedophilia became public.

Like Broaddrick, Millwee was appalled at Harris’ decision to sit with the former president, telling the Daily Caller in an interview Wednesday that she could not think of anyone more “ill suited” to discuss women’s empowerment. “He is going to get up on a stage and tell us about how to be empowered? I truly can’t think of anything more brazen. I think this goes to show you the political power that the Clintons still have,” she noted to the outlet.