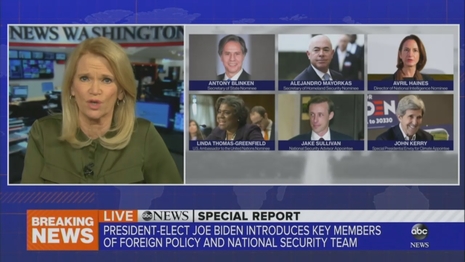 After four years of unrelenting criticism of the Trump administration, cable hosts and correspondents have greeted each Biden cabinet announcement with cheers as they uncritically welcome each selection as a “sharp rebuke” to that dastardly Donald Trump’s administration.

The following are just a few of the examples of journalists hailing Biden’s choices from the last week:

PBS’s NewsHour White House correspondent Yamiche Alcindor: “Just saying they’re going to do their job and be good stewards of America’s role in this world and focus on American diplomacy, that in and of itself being a rebuke of President Trump...I was talking to a Democrat who just said this also felt like the Avengers, it felt like we are being rescued from this, this craziness we’ve all lived through these past four years and now here are the superheroes to come and save us all.”

Host Alisyn Camerota: “Biden will also formally announce his economic team today after naming an all-female senior communications team last night….It’s an historic headline and a very important historic headline, but I think that sometimes eclipses their qualifications for the job. These women will be familiar to lots of our viewers. They’ve been around Washington. They’ve been in and out of the White House. They know what they’re doing. But as you point out, it’s very notable, because Washington is the ultimate old boy’s club.”...

Yahoo! News reporter Brittany Shepherd: “D.C. is the city of boy’s clubs. I think the White House is probably the most notorious of them all. Both in the press representation and in the staffing. It’s critical for the Biden transition team that they are putting adults in the room. That’s why you’re seeing a lot of Obama-world veterans, both formally and informally in Jen Psaki and others.”

“We’ve been watching announcements by President-Elect Joe Biden of his some of his economic team….The message from the President-Elect was ‘help is on the way,’ trying to paint a picture of an economic team that will be able to really help this economy — in terms of equality as well. Making sure all Americans have a better future.”

Let’s Admit It, Trump’s Team Were a Bunch of Yes Men

“They are now being told that it is not going to be political and Joe Biden saying ‘these are people, this is a team who’s going to tell me….what I need to know, not what I want to know.’ That is a big change.”

ABC’s Good Morning America correspondent Cecilia Vega: “Joe Biden this morning is moving on with his transition, including trying to make good on his campaign promise to diversify the White House with that first, all female communication team.”...

NBC’s Today correspondent Geoff Bennett: “For the first time, all of the senior staffers tasked with shaping White House messaging will be women.”

White House correspondent Rachel Scott: “Everything about it [cabinet announcements] the tone, the message, the rollout. All of it amounted to a very sharp rebuke of President Trump....Joe Biden has promised to have a diverse cabinet that reflects the diversity of America.”

Correspondent Martha Raddatz: “And so far he’s doing that.”

Go Ahead, Tell Us How Racist and Inexperienced Trump’s Cabinet Was

“A very experienced group, a very diverse group. Clearly you were trying to send a message. Can you articulate what that message is?”

Head Scratcher: Cabinet Full of Politicians Is “Not Political?”

“This is about the least flashy team you could possibly get. They are deeply experienced, they are humble and they are life-long public servants….They are not political….They really do reflect America.”

Press Corps Sycophants Have Their Buddies Back in Power!

“I’m actually quite pleased that he [Joe Biden] picked not only women, but these women in particular because they have strong relationships with the press….Remember how Trump used to attack reporters like Abby Phillips, reporters like Yamiche Alcindor, April Ryan, Kaity Collins. It was a constant, at that point, attack of female reporters predominantly….I think this is a point in the right direction because we know that now we’ll have a more traditional relationship with the press.”