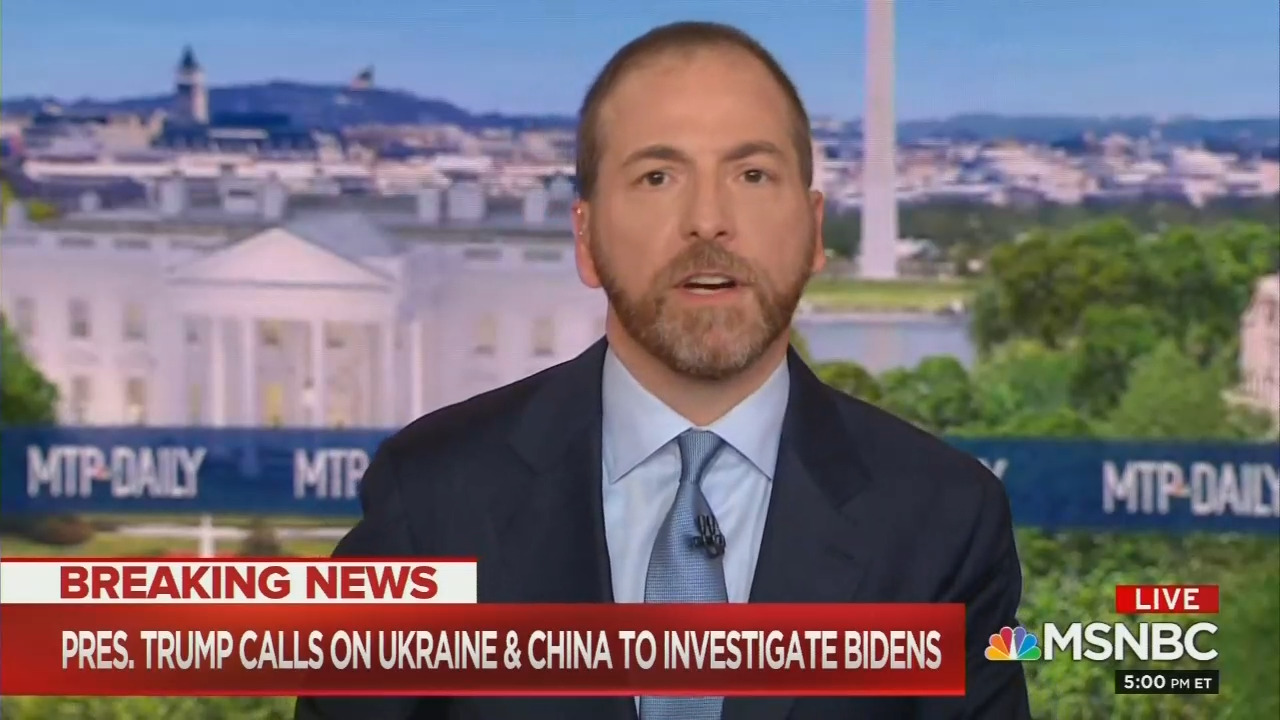 When former Massachusetts Governor Bill Weld claimed Trump’s “treason” was punishable by death, an MSNBCer casually inquired: “Have you looked into this?...How do you see this proceeding?”

These were just some of the insane reactions in the media to the Trump-Ukraine story.

Celebrities joined in the impeachment frenzy, as well. Comedian Rosie O’Donnell called for a “national holiday” to celebrate just the impeachment inquiry of Trump. Robert DeNiro popped-in on Brian Stelter’s CNN show to drop the “F” bomb on Fox News and “gangster” Trump.

The following is just a sampling of the most egregious outbursts from the liberal media and celebrities from the past few weeks:

Todd Decrees “National Nightmare Is Upon Us”

“Let’s be frank, a national nightmare is upon us. The basic rules of our democracy are under attack from the President....This moment should arguably be a national emergency. The Founding Fathers would have considered it a national emergency if the President publically lobbied multiple foreign governments to interfere in the next election and yet there has been virtually no condemnation from the President’s party at all for this remark which was remarkable considering the precedent it would set and the lasting damage it would do to our democracy.”
— Host Chuck Todd on MTP Daily, October 3.

Co-host Don Lemon: “The coverup, the tapes, and a President under a cloud of impeachment. Is President Trump out-Nixoning Nixon?”...
Former CBS Evening News anchor Dan Rather: “Certainly it’s reminiscent of the Watergate period in the 1970s, but there is this big difference....What’s different between what Richard Nixon did and what Donald Trump has already admitted to is this: It involves a foreign power.... I do think that in this case the President has out-Nixoned Nixon.”
— CNN Tonight, September 26.

Former Republican Massachusetts Governor Bill Weld: “That is treason. It’s treason, pure and simple and the penalty for treason under the U.S. Code is death. That’s the only penalty. The penalty on the Constitution is removal from office and that might look like a pretty good alternative to the President if he can work out a plea deal.”...
NBC News/MSNBC political analyst and Time contributor Elise Jordan: “Governor [Bill] Weld, you went a little bit further than just impeachment in your prior comments And I just want to continue with that a bit. You said that Donald Trump has committed treason and the penalty for treason under American law is death....What’s the legal framework here? Have you looked into this?...How do you see this proceeding?”
— MSNBC’s Morning Joe, September 23.

Will Republicans Stand Up to Trump?

“One of the great questions of the era is going to be who wants to be Margaret Chase Smith? Who wants to be Joseph Welch, the lawyer who said to McCarthy, finally, ‘have you no decency?’ And I promise you, there’s a historical legacy, there’s a historical halo ready to be grabbed if people will stand up and say, no more.”
— Presidential historian and former Newsweek editor Jon Meacham on MSNBC’s Morning Joe, September 23.

“We are living through a particularly turbulent, depressing and dangerous period in American history unlike we’ve ever encountered before. And these people [Republicans silent about Trump] are going to be held accountable by history at some point starting now.”
— Mike Barnicle on MSNBC’s Morning Joe, October 7.

We Must Impeach Now, We Really Mean It This Time

“You know, guys, it does feel like a moment in time. We’ve sat on this set after so many Trump snafus and, you know, ‘Oh, this is it.’ This is a game changer....I’ve been the one all along saying step away from impeachment because when it’s a process thing, when it’s a campaign finance. This is the big one....This is the Super Bowl and the Democrats need to pounce aggressively.”
— Former advertising executive and current MSNBC contributor Donny Deutsch on MSNBC’s Morning Joe, September 20.

Only Media Stands in the Way of Trump’s “Imperial Presidency”

“There is a long-range strategy at play here and it’s deride and conquer....Deride, mock, make us a laughingstock....If they can do that to the press, if they can mock us to the point where people don’t take us seriously and we don’t back up our effort, if we don’t show integrity, if we don’t have some teeth in our reporting, they will do it....We are the last best hope between Trump and an imperial presidency.”
— The Baltimore Sun media critic David Zurawick on CNN’s Reliable Sources, September 22.

Impeachment of Trump Will “Unify” America?

“I think impeachment proceedings will unify the country. Will unify the country....I think it will unite this country when Americans like during Watergate watch what this president has been up to lining his own pockets for the good of himself and his family against what’s good for this country.”
— Co-host Sunny Hostin on ABC’s The View, September 25.

Hillary Clinton speaking about First Lady Eleanor Roosevelt: “She worked hard to become the person she became.”
Host Jane Pauley: “You may say the same about Hillary Rodham Clinton. And, like Eleanor Roosevelt, also loved and loathed. But by any measure, a gutsy woman.”...
Pauley to Chelsea Clinton: “You wrote a book with your mother so Hillary Clinton’s name is on the front of the book, but as a portrait of gutsy women she’s not in the book – except maybe between every line.”
— During an interview with Hillary and Chelsea Clinton on CBS Sunday Morning, September 29.

“I’ve never heard of a guy who is a one-time rapist. I’ve never heard of a one-time sexual assaulter. I grew up with guys [Supreme Court Justice Brett Kavanaugh] like this. He’s from around this area, right? He is the fifth guy in a gang rape. He’s the guy who comes in after he is drunk because everybody else encourages him and he can get away with it. He’s been pretty much covered his entire life. And now he’s on the Supreme Court, where he can move that same despicable misogynist attitude he has gotten away with his entire cowardly life to the greatest misogynist of all, which is the President of the United States.”
— MSNBC contributor and TheRoot.com’s Jason Johnson on MSNBC’s AM Joy, September 15.

Watch What You Eat or the Planet Will Die...

“We have to think about climate change and how we fight it in terms of net cost to us, right? There are things that feel like sacrifices but if you look at the alternatives, if we don’t change certain behaviors, the world will flood, burn and be destroyed. So when you talk about sacrifices to the way we eat, are you talking about individual choices or governmental level institutional changes to how we eat?...Do we become vegans?”
— Host Ali Velshi to author Jonathan Foer as aired on MSNBC Live, September 16.

...and Iconic Landmarks Like Lady Liberty Will Be Washed Away

“Experts say climate change, it’s already here and it’s causing our sea levels to rise. That is threatening some iconic American landmarks....At the rate we’re going, climate researchers predict a future where major cities, including our nation’s capital, could look like this. [Animation of Washington D.C. underwater]....A lot of our landmarks, a lot of our history, is along the coast – Lady Liberty....Jamestown, Virginia is at risk of being washed away.”
— Weatherman Al Roker on NBC’s Today, September 17.

Grandpa and Grandma Want You to Die

“Some of these people who are denying climate change, they are going to be dead and they don’t care, apparently, about their grandchildren. They only care about the 401(k)s.”
— Co-host Joy Behar on ABC’s The View, September 24.

CNN Is Now Outsourcing Their Bias to Australian Journalists

Host Brian Stelter: “In journalism, a fresh set of eyes is always helpful to have. That’s why an op-ed from Guardian Australia Editor Lenore Taylor has gone viral among reporters. She describes a recent visit to the United States where she was struck by the ways that American reporters write about President Trump. She says reporting about this president can mask and normalize Trump’s incoherence....Flying home from the United States, were you worried about America? Were you worried about President Trump?”...
Guardian Australia Editor Lenore Taylor: “Yes, I was quite worried about that actually.”
Stelter: “Uncomfortable to hear you say that but I’m glad you’re here to say it.”
— CNN’s Reliable Sources, September 22.

Your Tax Dollars at Work: NPR Champions the Chi-Coms

“It’s communist in name, but it is not the party of the proletariat; it’s the party of state capitalism. And it’s a party that promised to lift people out of poverty, which, you know, to be truth be told, it has done a spectacular job of. In fact, it’s lifted hundreds of millions of people out of poverty.”
— NPR anchor Ailsa Chang on NPR’s Morning Edition, October 1. According to The Black Book of Communism, an estimated 65 million people died because of the Chinese Communist Party.

Women Forced to Give Birth Should Be Paid Like Soldiers

The Handmaid’s Tale author Margaret Atwood: “Since they’re rolling back those [abortion] rights....If you want this state to claim ownership of women’s bodies, you should pay. So if somebody’s drafted into the army, they get their food, their lodging and clothing, their medical. All of that covered. So if you want to do that to women, you should pay for it.”...
Co-host Joy Behar: “Something’s got to be done. Something, some remuneration if you are forced to give birth to some child you don’t want.”
— ABC’s The View, September 20.

Apparently Not a Fan of Fox News

Robert DeNiro: “This guy [Donald Trump] has done everything possible, much worse than I ever thought ever. The day after he was elected I said, give him a chance. You’ll never know. He is worse than I ever could have imagined....I can’t believe that they [Fox News pundits] would actually buy into this craziness. This guy....should not be president, period.”
Host Brian Stelter: “And when you say that, folks on Fox come after you. I remember the Tony’s when he got up there and cursed. A lot of criticism of you.”
DeNiro: “Fuck’em. Fuck’em....This guy is like a gangster.”
— CNN’s Reliable Sources, September 29.

“Now that that big hourglass in the sky is running out of sandpebbles for dear Comrade leader, it’s time to turn our attention to every lowlife piece of shit scumbag in congress who defended his behavior as if to say it was OK. Patriotic. Standard. It never was.”
— September 26 tweet by actor Ron Perlman.