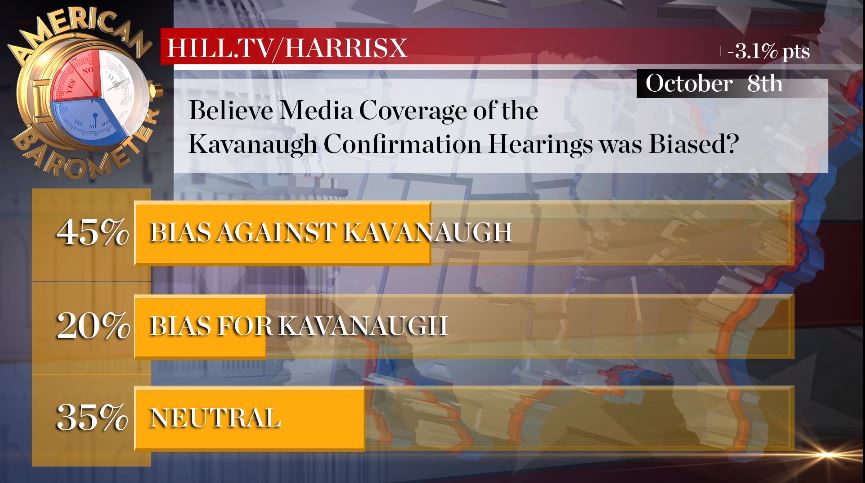 The liberal media’s joint effort with the Democratic Party to destroy Brett Kavanaugh was so blatant that fully 45 percent of those polled by The Hill determined that the media’s coverage of the hearings was slanted against the new Supreme Court Justice.

Of course, NewsBusters readers already recognized this, as we’ve documented the anti-Kavanaugh bias in numerous articles.

Twenty-percent of those surveyed actually thought coverage was bias in favor of Kavanaugh, with 35 percent saying it was neutral.

On Monday, The Hill newspaper’s Julia Manchester reported the following:

Forty-five percent of voters said news coverage of Supreme Court Justice Brett Kavanaugh’s confirmation hearings was biased against him, according to a new American Barometer survey.

The poll, conducted by Hill.TV and the HarrisX polling company, also found that 20 percent of voters who responded considered the media's coverage biased in Kavanaugh's favor, with 35 percent saying it was neutral.

“I think that it tells you this is an incredibly divisive topic,” Democratic pollster Molly Murphy, a partner at ALG Research, told Hill.TV’s Joe Concha on “What America’s Thinking.”

For collections of some of the worst media bias against Kavanaugh please click here, here and here.