NewsBusters Year-in-Review: The Most Outrageous Quotes of 2017 Part I 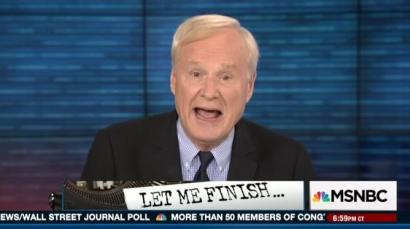 As 2017 comes to a close, this week NewsBusters is recounting the most obnoxious liberal bias of the year. Today’s installment: the most outrageous examples of journalists fawning over liberal or left-wing icons, including Barack Obama who MSNBC’s Chris Matthews swooned over: a “fine case of that fine man” that was a “fine president.”

His colleague Rachel Maddow called Obama a “top ten” president of all-time who saved us from another Great Depression, while former disgraced Today show host Matt Lauer admitted he “burst out crying” over Obama and Joe Biden’s final moments.

And of course, there was also praise for the defeated presidential candidate Hillary Clinton, who was hailed by reporter Ami Parnes from The Hill: “She will always be the smartest woman in the room.”

In upcoming days, we’ll be showcasing the most horrendous anti-conservative quotes of the year, the worst freak-outs over Donald Trump, the stupidest analysis of the year, and the most obnoxious celebrity quotes of 2017.

One Final Obama Thrill for Chris...

“I think he’s [Barack Obama] a fine man. I think he’s been a fine president....Let me finish tonight with the American president we’re about to lose. Barack Obama is, above all, a fine man. Just look at him. Is there a husband, a father that we would wish more as a model for our sons, for our sons-in-law to have and raise our grandchildren? Is there anyone who carries himself better in word, in sentiment, in temperament, in optimism? Hope. That was the word on that poster. It’s the feeling he exemplified in his last press briefing....To say that no person can make a difference, I give you the fine case of that fine man, Barack Obama.”
— Host Chris Matthews on MSNBC’s Hardball, January 18.

...But Discovering a New Thrill

“Your speaking ability is really thrilling...It’s damn good political salesmanship. It’s rhetoric of the best political kind. You get your audience riled up and you get them roused up. They’re happy. As, Mario Cuomo used to be able to do this, you leave people upbeat about what they can get done at the end of the speech. It’s not eating spinach. It’s not the stations of the cross. When they’re done with you, they’re happy and they go out and fight.”
— Host Chris Matthews to Sen. Elizabeth Warren on MSNBC’s Hardball, May 2.

One of the Best Ever

“I think he’ll go down in history as both a consequential and excellent president, viewed from the beginning of the country until now. I think that his economic record alone, in terms of saving us from the Great Depression, if that’s the only thing you knew, even if he hadn’t been the first African-American president doing it, that alone will put him in the top ten presidents in U.S. history. And nothing else that anybody says about him or nothing else that happens by his successor will ever change that.”
— Host Rachel Maddow during MSNBC’s live coverage of Barack Obama’s farewell address, January 10.

Matt Can’t Hold Back the Waterworks

“Not sure if you saw this, but there was something special in Washington yesterday. It’s getting a lot of attention. President Obama surprising his vice president, Joe Biden, with the Presidential Medal of Freedom....So I’m glad there were no cameras in my apartment yesterday because I was just sitting there weeping. I just burst out crying when I saw that moment. It was incredible.”
— Co-host Matt Lauer on NBC’s Today, January 13.

“It’s very hard to set the Barack Obama standard. In my mind, he’s like Dwight Eisenhower. He is almost unimpeachable. He has governed with such honesty and integrity, and he’s not only leaving with that 60 percent we keep talking, but a growing reputation. And the legacy of having eight scandal-free years is going to look larger and larger in history because we’re already looking at the bog of what’s going to happen in the first months of Trump’s presidency. I’m not saying Donald Trump may not be a very successful President, but when you rank Presidents on ethical standards, Barack Obama’s the highest. He’s up there with some of our really great American leaders.”
— CNN presidential historian Douglas Brinkley on CNN Tonight, January 19.

“What’s helping Barack Obama’s legacy with the press is Donald Trump. By comparison, he’s like St. Augustine up there talking to the flock.”
— CNN presidential historian Douglas Brinkley on CNN Tonight, January 18.

“Here’s my prediction: America and the world will soon be craving that Obama Cool again....Trump may dismantle ObamaCare and pull out of the Paris climate accord. But he cannot undo Obama’s legacy of dignity and old-fashioned virtue, and the impression he made on all of us. And if, as I fear, we see the White House transformed into a bog of scandals flowing from an unprincipled narcissist, we as a nation will be more appreciative of a first family that set an impeccable example for all the world.”
— New York Times columnist Nicholas Kristof in January 19 article “Missing Barack Obama Already.”

“Smartest Woman in the Room” That Still Lost?

“She’s [Hillary Clinton] one of the smartest people, she will always be the smartest woman in the room, I think.”
— The Hill reporter Ami Parnes on PBS’s Charlie Rose, May 3.

Wouldn’t We Be Better Off If Hillary Won?

“In terms of protecting democracy, protecting respect for the Office of the Presidency and protecting our image abroad, is it possible in your mind to consider that it would have been better if Hillary Clinton won this election?”
— Co-host Matt Lauer to Sen. Jeff Flake on NBC’s Today, October 25.

“I was positive you were going to win. Everyone was. Then when I saw that you weren’t, we showed a picture. I went into mourning. I had a veil....People were crying. It was like at a certain moment we were on the air when I realized you were not going to win. I felt like I had lost a friend or something....Did you cry? Did Bill cry?”
— Co-host Joy Behar to Hillary Clinton on ABC’s The View, September 13.

“In the well of the Senate, it came down to one very dramatic moment. Senator John McCain walks in, asks to be recognized, raises that right arm broken three different places in North Vietnam, a quick indicator with a thumbs down....Seven years of talk about repeal and replace done in one hand gesture....Charlie, much was made of that moment, a moment of moral courage, a man staring down his own mortality yet again, not the first time in his life.”
— Host Brian Williams on MSNBC’s The 11th Hour, July 28.