Fear, Tears and Comfort Food: How The Media Dealt with Election Night ‘16 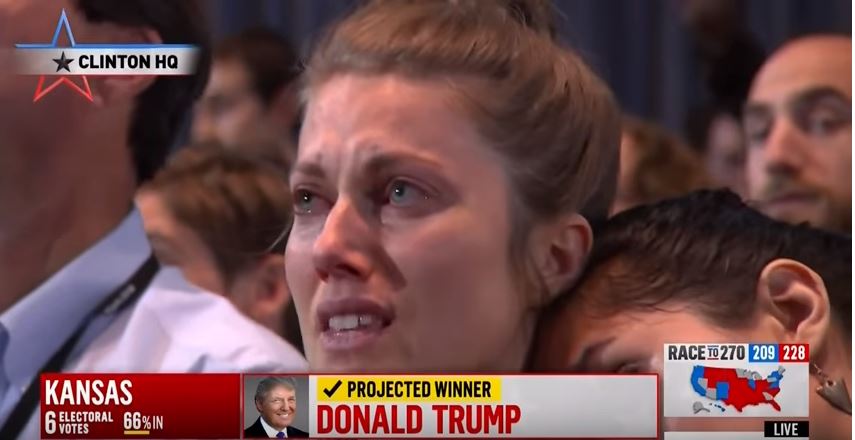 Esquire magazine revisited Election Night 2016 by talking to journalists, pundits, campaign staffers and entertainers, getting their recollections of how they remembered the night or in the case of most of the journalists dealt with the pain.

It’s an entertaining and illuminating read about how most of the leftist media misread the election and how devastated they were by the results. It’s a story of fear, tears and in the case of one anchor –  “comfort food.”

New York magazine’s Rebecca Traister actually wept when she realized Hillary Clinton would not win: “I felt so alone, I knew it was done. I was by myself on the floor. I started to cry. I was thinking everything from, ‘I’m gonna have to rewrite my piece’ to, ‘Can we stay in the U.S.?’ I texted my husband, ‘Tell Rosie to go to bed. I don’t want her to watch.’”

Author and CNN host Reza Aslan was terrified: “I thought, ‘Oh my God, how terrible are we that it’s even this close?’ My wife stayed up and I went to sleep, then she woke me up around 1 or 2 in the morning bawling and told me that it was over. My poor, sweet wife. She wanted to hug and kiss me but I went into a panic attack and couldn’t breathe...You take your kids to school, you go to the store, you go to the post office, you’re looking around, and you’re thinking, ‘These people hate me.’”

When Trump won, Univision anchor Jorge Ramos retreated to the comfort food of his childhood to sustain him: “I’ve been to wars, I’ve covered the most difficult situations in Latin America. But I needed to digest and to understand what had happened. I came home very late. I turned on the news. I had comfort food – cookies and chocolate milk – the same thing I used to have as a kid in Mexico City.”

The entire November 5 Esquire piece is worth reading as it includes interesting observations from the Trump and Clinton campaign staffs, as well. The following are the most illustrative anecdotes from the liberal journalists and entertainers as gleaned from the article:

Rebecca Traister, New York magazine: We got up around 7 a.m., and there was an electric current running through my body...They were serving, like, $12 pulled pork sandwiches [at the Javits Center]. It was nuts, people were bouncing off the walls. Everyone genuinely believed she was going to win. I don’t know if it made me feel more confident or not....I felt so alone, I knew it was done. I was by myself on the floor. I started to cry....I was thinking everything from, “I’m gonna have to rewrite my piece” to, “Can we stay in the U.S.?” I texted my husband, “Tell Rosie to go to bed. I don’t want her to watch.”...People were throwing up. People were on the floor crying....In the cab home, the cabbie had on the news, that’s when I heard his acceptance speech, and I said, “Can you turn it off?” I couldn’t hear his voice. I was like, “I can’t listen to his voice for the next four years.”...I got back to Park Slope, I went to check on the girls. When I went to say goodnight, I looked at Rosie, and I had this conscious thought that this is the day that will divide our experience of what is possible. This is the day where a limitation is reinforced for her.

Neal Brennan, comedian/writer: I was at SNL. Chappelle was like, “Dude, I feel like Trump’s gonna win.” I was like, “Dude, I’ll bet you a hundred thousand dollars he won’t win.” He did not take the bet, thankfully...Slowly but surely it dawns on us. And I had said things like, “You know, I’ve heard that technically Republicans can never win another presidential election.” I’m just saying dumb shit, all things I’d read on Politico or fuckin’ The Atlantic or whatever. And then slowly but surely it happens. It’s like we...it…fucking Hillary lost....That’s sketch-writing night at SNL. So all the writers are crestfallen, and it was up to us to write comedy for that Saturday. Me and [Colin] Jost wrote the sketch where Dave [Chappelle] is watching the election, and Chris Rock shows up and everyone’s bawling. It was based on the experience of being in Jost’s office and me saying incredibly stupid shit as reality crumbled.

Ana Marie Cox, Crooked Media, formerly of MTV: I did a couple of on-camera news hits where I was told, “What you need to do here is tell people not to panic.” Meanwhile, I was panicking....I happen to be in recovery. I had a moment of, like, “Why the fuck not?” I went on Twitter and said, “To those of us ‘in the room’ together, he’s not worth it. Don’t drink over this.” And the response I got was amazing. I said, “I’m going to a meeting tomorrow. Everyone get through this 24 hours, get to a meeting, we’re not alone.”...A Muslim colleague of mine called his mother. She was worried he was going to be the victim of violence at any moment. A colleague who is gay and married was on the phone with her wife saying, “They’re not going to take this damn ring away from me.”

Ashley Nicole Black, writer/correspondent, Full Frontal with Samantha Bee: We all went into a room and sat in silence for at least five minutes. The conversation wasn’t like, “What is it going to be in the country?” It was like, okay, “We’re at work. We have a show tomorrow. What are we going to do?” And Sam goes, “I think this is my fault.” It’s Sam’s first time voting in an American election, and she told us how the first time she was on Law & Order, Law & Order got canceled the next day. And she got interviewed by Playboy, and the next day they announced they were no longer doing nudity. And now she voted for the first time and broke America. We all laughed, it broke the tension in the room. Then we started writing Act 1 with that idea in mind....I took a shower, and then as soon as water hit me, I started bawling. I didn’t really have any feelings until that moment....I looked at myself — I’m going to cry even saying this right now — I looked at myself in the mirror, and in that moment, I looked like my grandmother. The first thought I had was that I was glad that she wasn’t alive to see that. Then I felt so guilty because of course nothing would ever make me glad my grandmother is not alive. I love her so much, and I wish she was here. But she died when Obama was president, with that hope that the world had moved forward, and black people had moved forward. And she didn’t see the huge backlash that came after. In that moment, I was very grateful, and then guilty, and then I went to bed.

Dave Weigel, The Washington Post: I was connecting through the Atlanta airport. I looked around and thought, well, for eight years, I didn’t really think about who voted for who. But as a white dude with a mustache, fairly bloated by the campaign, most of the people who look like me voted for this guy who, as far as they know, is a bigot. I remember feeling that this divider had come down, this new intensity of feeling about everybody I saw.

Maggie Haberman, The New York Times: I was getting bewildered texts from my child who couldn’t sleep, asking me what happened. I think this election was really difficult for kids to process.

Reza Aslan, author and religious scholar: I thought, “Oh my God, how terrible are we that it’s even this close?”...My wife stayed up and I went to sleep, then she woke me up around 1 or 2 in the morning bawling and told me that it was over. My poor, sweet wife. She wanted to hug and kiss me but I went into a panic attack and couldn’t breathe....I remember thinking, as clear as day, this is who we are. This is what we deserve....You take your kids to school, you go to the store, you go to the post office, you’re looking around, and you’re thinking, “These people hate me.”

David Remnick, editor of The New Yorker: Jelani [Cobb] and I spoke around midnight. We were both, let’s put it this way, in the New Yorker mode of radical understatement, disappointed. Jelani’s disappointment extended to his wondering whether he should actually leave the country. He wasn’t kidding around. I could tell that from his voice....We agreed that night, and we agree today, that the Trump presidency is an emergency. And in an emergency, you’ve got a purpose, a job to do, and ours is to put pressure on power. That’s always the highest calling of journalism, but never more so than when power is a constant threat to the country and in radical opposition to its values and its highest sense of itself.

Jelani Cobb, The New Yorker: I saw the New York Times headline and I was very discomforted by it. For one, I knew that I had a child on the way....I went to the airport the next morning for a 7 a.m. flight. There’s an African-American gentleman, maybe in his 60s, working at the check-in counter. He starts talking about how disastrous and dangerous this moment’s going to be. And he’s seen history in the South and thinking that we might be headed back toward the things he thought were in the past.

Jorge Ramos, Univision news anchor: When he won, I said it as if I was reporting a football score or a soccer match. “Donald Trump is going to be the next president of the United States.” No emotion. Just the facts. That’s what the audience demanded. That is a sign of respect. As a journalist you have to report reality as it is, not as you wish it would be. That’s exactly what I was doing....I’ve been to wars, I’ve covered the most difficult situations in Latin America. But I needed to digest and to understand what had happened. I came home very late. I turned on the news. I had comfort food — cookies and chocolate milk — the same thing I used to have as a kid in Mexico City. After that, I realized that I had been preparing all my life for this moment. Once I digested what had happened with Trump and had a plan, which was to resist and report and not be neutral, then I was able to go to bed.

Shani O. Hilton, U.S. news editor, BuzzFeed News: You get on the train from Brooklyn. It’s silent. And not in the normal way of people not talking to each other. It felt like an observable silence. I saw at least three people sitting by themselves, just weeping silently.