Working the Refs: Journalists Push Debate Moderators to Be Tougher on Trump 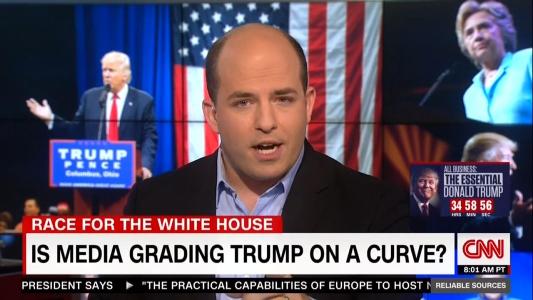 In the weeks leading up to Monday night’s first one-on-one clash between Donald Trump and Hillary Clinton, the liberal media have set the stage for NBC Nightly News anchor Lester Holt and his fellow presidential debate moderators to be rougher with the GOP nominee.

Journalists from the New York Times to CNN have openly declared that Trump is so intolerably “polarizing,” “racist and sexist” that he must be treated to a completely different standard than the Democratic candidate. They’ve even started lobbying the presidential debate moderators to be tougher on Trump, via attacks on NBC Today show host Matt Lauer’s performance at the September 7 Commander-in-Chief Forum. For Lauer’s perceived crime of actually asking Clinton about her e-mail scandal and not calling Trump disqualified to his face, the longtime morning show anchor’s efforts was derided as an “embarrassment to journalism.”

Objectivity is Out the Window

The cries to treat Trump the Terrible with a different standard than Clinton started to grow in August. Emblazoned on the front page of the August 8 New York Times, media columnist Jim Rutenberg issued the clarion call to his colleagues: “If you’re a working journalist and you believe that Donald J. Trump is a demagogue playing to the nation’s worst racist and nationalistic tendencies, that he cozies up to anti-American dictators and that he would be dangerous with control of the United States nuclear codes, how the heck are you supposed to cover him?...It is journalism’s job to be true to the readers and viewers, and true to the facts, in a way that will stand up to history’s judgment. To do anything less would be untenable.”

Rutenberg’s cronies at the still-influential paper of record (among liberal elites) revealed the mindset driving this collusion against objectivity. Times columnist Maureen Dowd told NBC’s Chuck Todd, on the September 18 edition of Meet the Press, that her buddies can’t stand Trump: “My friends —  one of my friends, Leon Wieseltier, calls it a national emergency. My friends won’t even read any —  if I do interviews with Trump. They won’t read them. And basically, they would like to censor any stories about Trump and also censor any negative stories about Hillary. They think she should have a total free pass because as she said at that fundraiser recently, ‘I’m the only thing standing between you and the abyss.’”

Dowd’s fellow Times columnist Paul Krugman, in a September 5 piece, charged: “It’s hard to escape the impression that he’s [Donald Trump] being graded on a curve. If he manages to read from a TelePrompter without going off script, he’s being presidential. If he seems to suggest that he wouldn’t round up all 11 million undocumented immigrants right away, he’s moving into the mainstream. And many of his multiple scandals, like what appear to be clear payoffs to state attorneys general to back off investigating Trump University, get remarkably little attention. Meanwhile, we have the presumption that anything Hillary Clinton does must be corrupt, most spectacularly illustrated by the increasingly bizarre coverage of the Clinton Foundation.”

The members of Team Hillary at the New York Times may have lit the torch but it wasn’t long before other outlets picked up it up.

Univision and Fusion news anchor Jorge Ramos, in an August 23 piece for Time magazine blared “neutrality is not an option.” Ramos scolded: “It doesn’t matter who you are — a journalist, a politician or a voter — we’ll all be judged by how we responded to Donald Trump. Like it or not, this election is a plebiscite on the most divisive, polarizing and disrupting figure in American politics in decades. And neutrality is not an option. The day after the election will be too late....If a candidate is making racist and sexist remarks, we cannot hide in the principle of neutrality. That’s a false equivalence....Judgment day is coming. Will you have peace of mind come November 9th?”

Slate editor Jacob Weisberg told CNN Reliable Sources host Brian Stelter on September 4 that Clinton is an edible apple compared to the “rancid meat” that is Trump, in the following exchange:

Jacob Weisberg: “You know, the structure of covering politics is you compare an apple and an orange, and they have different attributes, but they’re both fruits and you can take your pick. In this case we have something more like an apple and some rancid meat. Excuse the expression.”
Brian Stelter: “I’m sorry, is Donald Trump the rancid meat?”
Weisberg: “He’s the rancid meat, and in all sorts of ways. I mean, it’s conspiracy thinking, and racism.”

Former Boston Globe and current Esquire columnist Charles Pierce was even cruder, in his September 11 piece: “There is an accomplished woman saying something everybody knows is true and there is a vulgar talking yam who apparently could set his own dick on fire and not pay much of a price for it on television. That is grading on the curve....Of course, Trump has been graded on a curve....It is timidity now that grades this ridiculous man running this ridiculous campaign on the biggest curve of all — the timidity of a people who have declined the responsibilities of serious citizenship and the abdication of its duty under the Constitution of a putatively free press too timid to call them on it.” 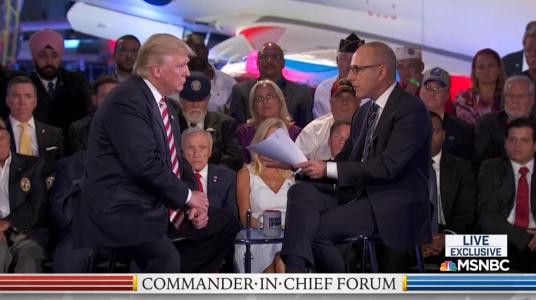 With the groundwork laid down that Trump is so horrible he must be treated more harshly than Hillary Clinton, liberal journalists hounded NBC Today show host Matt Lauer for, what they believed, was a too-balanced moderating job at the September 7 presidential forum. Once again, the New York Times led the charge.

In his September 8 article Times TV critic James Poniewozik savaged Lauer for the crime of actually asking Clinton about her e-mail scandal and not calling Trump disqualified to his face: “The NBC presidential forum on Wednesday night in Manhattan brought together the candidates Hillary Clinton and Donald J. Trump to try to determine who has the strength, preparation and presence of mind to lead during a time of crisis. It sure wasn’t Matt Lauer. In an event aboard the decommissioned aircraft carrier Intrepid, the Today host was lost at sea. Seemingly unprepared on military and foreign policy specifics, he performed like a soldier sent on a mission without ammunition, beginning with a disorganized offensive, ending in a humiliating retreat.”

Poniewozik added: “Candidates should expect to be challenged. They’re applying for a challenging job. But where Mr. Lauer treated Mrs. Clinton like someone running for president, he treated Mr. Trump like someone running to figure out how to be president, eventually. That interview was the apotheosis of this presidential campaign’s forced marriage of entertainment and news. The host of NBC’s morning show interviewed the former star of its reality show The Apprentice, and the whole thing played out as farce.”

Times reporter Michael Grynbaum in his September 8 article dutifully collected all the criticisms of Lauer: “Charged with overseeing a live prime-time forum with Donald J. Trump and Hillary Clinton — widely seen as a dry run of sorts for the coming presidential debates — Mr. Lauer found himself besieged on Wednesday evening by critics of all political stripes, who accused the anchor of unfairness, sloppiness and even sexism in his handling of the event....Journalists and longtime political observers pounced. ‘How in the hell does Lauer not factcheck Trump lying about Iraq? This is embarrassingly bad,’ wrote Tommy Vietor, a former aide to President Obama. Glenn Kessler, the chief fact checker at The Washington Post, posted a link to NBC’s check of Mr. Trump’s claim and wrote: ‘@MLauer should have been prepared to do this.’”

Later in the article Grynbaum reinforced the need for different standards for Clinton and Trump: “The criticism captured what has become a common complaint about media coverage during this election: that news organizations and interviewers treat Mrs. Clinton as a serious candidate worthy of tough questions, while Mr. Trump is sometimes handled more benignly....Still, with the formal debates set to begin on Sept. 26, Mr. Lauer’s performance seemed to preview the troubles that television moderators could face in balancing fairness with accountability.”

Former New York Times reporter and current CNN host Brian Stelter also ran with the Lauer pile-on. Stelter — in a Reliable Sources e-mail sent after the NBC “Commander-in-Chief Forum” — was upset that Lauer didn’t come to knock Trump off his chair and expose him as a moron: “The candidates made a lot of news. But did the network ultimately lose by letting untruths go unchallenged? I’ve been scouring the web for positive comments about Matt Lauer’s moderating. But the comments are almost universally negative.”

Stelter’s CNN colleague Dylan Byers, in the same Reliable Sources e-mail relayed the lashing of Lauer by his media peers. New York Times columnist Nicholas Kristof tweeted “This #NBCNewsForum feels like an embarrassment to journalism.” New York magazine’s Jonathan Chait tweeted “Lauer’s performance was not merely a failure, it was horrifying and shocking.” Slate’s Will Saletan, on Twitter, wrote: “Lauer has done great interviews. But that’s one of the weakest, least incisive performances I’ve seen from a presidential forum moderator.”

Stelter and Byers continued the assault on Lauer on the September 8 edition of CNN’s New Day. Stelter admonished: “I saw the journalistic challenge of this decade. Interviewing Donald Trump and challenging him when he’s wrong is the journalistic challenge of our time....Matt Lauer did not step up to that challenge.” For his part, Byers huffed: “Well, look, you know, political interviews, forums, town halls, debates, these are significant deals. There’s especially big, significant given all that’s at stake in the 2016 election. You don’t send Matt Lauer to do a political reporter’s job.”

It’s not as if the liberal-leaning Holt and his liberal media colleagues need any prodding. But by the end of the attacks on Lauer, the message was clear: Hit Trump harder than Hillary, or face the condemnation of your peers.