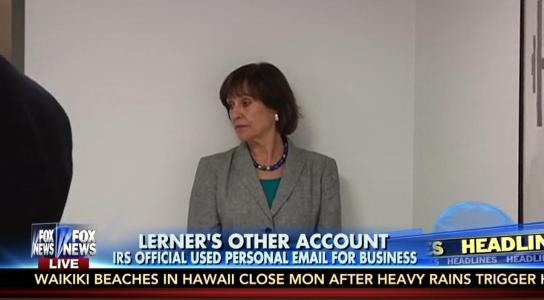 First it was a destroyed hard drive, then it was a busted BlackBerry and now we find out Lois Lerner used another personal e-mail account to conduct government business that utilized the alias “Toby Miles.” This IRS targeting scandal has more twists than an old episode of Law and Order, but it’s still not enticing the Big Three networks (ABC, CBS, NBC) to go back to covering it.

So far none of the Big Three evening or morning shows have reported on this latest IRS scandal development.

UPDATE: National Review's Eliana Johnson reported “Toby” is the name of Lerner’s dog and “Miles” is the surname of her husband Michael Miles.

Lois Lerner had yet another personal email account used to conduct some IRS business, the tax agency confirmed in a new court filing late Monday that further complicates the administration’s efforts to be transparent about Ms. Lerner’s actions during the tea party targeting scandal. The admission came in an open-records lawsuit filed by Judicial Watch, a conservative public interest law firm that has sued to get a look at emails Ms. Lerner sent during the targeting.

IRS lawyer Geoffrey J. Klimas told the court that as the agency was putting together a set of documents to turn over to Judicial Watch, it realized Ms. Lerner had used yet another email account, in addition to her official one and another personal one already known to the agency.

It is unclear who Toby Miles is, but Mr. Klimas said the IRS has concluded that was “a personal email account used by Lerner.”

Tom Fitton, president of Judicial Watch, said it was stunning the agency was just now admitting the existence of the address.

“It is simply astonishing that years after this scandal erupted we are learning about an account Lois Lerner used that evidently hadn’t been searched,” he said, accusing the IRS of hiding Lerner-related information throughout — including the existence of the backup tapes of her official email account, which the agency’s inspector general easily found once it went looking for them.