Walloping Walker: The Media’s Worst Attacks on the Wisconsin Governor 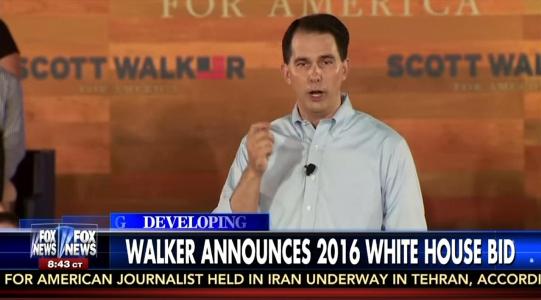 Scott Walker’s official entry into the 2016 presidential race has already been met with questions about his sophistication and readiness to be president by the liberal media. The day of Walker’s announcement The New York Times’ Patrick Healy portrayed the GOP governor as someone who isn’t ready for the world stage: “Two words these [Walker] voters do not use about him? ‘Smart’ and ‘sophisticated.’”

Healy added: “A series of early gaffes alarmed party leaders and donors and led Mr. Walker to begin several months of policy tutorials. The collective hope is that Mr. Walker can avoid what Mr. Goeas and other advisers describe as Sarah Palin’s problem — becoming a candidate who is initially popular among Republicans, like the 2008 vice-presidential nominee, but loses luster because of missteps as the campaign goes on.”

The liberal media first took notice of Walker in 2011, when he took on the public unions to bring some financial stability to Wisconsin. For this he was called a “hooligan” by The Washington Post’s Dana Milbank and “un-American” by MSNBC’s Joe Scarborough. Scarborough’s MSNBC colleague Ed Schultz called his budget “racist,” and invited Jesse Jackson to compare him to the segregationist Governor George Wallace. ABC’s Diane Sawyer and NBC’s Brian Williams compared anti-Walker protests to those against Egyptian dictator Hosni Mubarak.

Walker has taken shots from the celebrity crowd as well. Stand-up comic Sarah Silverman once tweeted that she wanted to “anally probe” the governor and HBO’s Bill Maher compared him to the banjo-playing boy in the movie Deliverance.

The following examples, culled from the MRC’s archive, are the worst attacks (so far) on Scott Walker:

Dean Reynolds: “Awkward exchanges like this have raised questions about his readiness for primetime.”
Unidentified reporter: “Are you comfortable with the idea of evolution? Do you believe in it? Do you accept it?”
Scott Walker: “For me I’m going to punt on that one as well.”
Reporter: “No. Really?”
Walker: “That’s a question a politician shouldn’t be involved in one way or the other.”
Reynolds: “To guard against criticism that he lacks a certain presidential heft, the governor has been undergoing weeks of briefs on global issues, everything from net neutrality to ISIS.”
—CBS’s Dean Reynolds on CBS This Morning, July 13, 2015.

Protests Against Walker Just Like Those Against Egyptian Dictator

“Today, we saw America’s money trouble meet a reality, a human reality, as teachers, nurses, tens of thousands of state workers took to the streets in this country protesting cuts by the governors, saying to these governors, a promise is a promise. One lawmaker looked out at the crowds gathered in the Wisconsin capital today and said it’s like Cairo moved to Madison.”
— Anchor Diane Sawyer opening ABC's World News, February 17, 2011.

“From the Mideast to the American Midwest tonight, people are rising up. Citizens’ uprisings are changing the world.”
—  Anchor Brian Williams leading off NBC Nightly News, February 18, 2011.

“‘I don’t budge,’” Walker promised the fake Koch. He explained that he would increase pressure on state workers by threatening thousands of them with layoffs. He considered planting instigators in the crowd, he said, and he might offer to talk to Democrats - but only as a ruse to get them to return. ‘I’m not negotiating,’ he said. These are not the words of a statesman. These are the words of a hooligan.”
— Washington Post columnist Dana Milbank writing about the content of a phone conversation between Walker and a prankster who pretended to be billionaire David Koch in his February 27, 2011 column.

Scarborough: Walker’s Stand Against Collective Bargaining ‘Seems Kind of Un-American To Me’

“Well, I’ll say it. This is a racist budget. I mean, anybody with a brain knows that those 82 percent of the kids under the poverty level are never going to go to a private school, and yet the governor wants the parents of those kids to take a portion of their tax dollars and fund private schools. I mean, it is a racist budget. You cannot get around it. It’s picking on the poor. It’s picking on the inner-city kids. How else can you read it?”
— Ed Schultz in a discussion about school vouchers with Al Sharpton on MSNBC’s The Ed Show, March 3, 2011.

ED SCHULTZ: Last night I had chance to see firsthand the enthusiasm for this recall election. Reverend Jesse Jackson rallied hundreds of voters in northwest Milwaukee. He called this election one of the biggest moments in the history of our democracy. He compared it to Emmett Till’s lynching and Rosa Parks’ refusal to give up her seat. The Reverend also compared Governor Walker to Alabama’s governor George Wallace.
(BEGIN VIDEO CLIP)
REV. JESSE JACKSON: So now you have a governor -- Wallace did it in Alabama – and now Walker in Wisconsin. Trying to take back access to voting. [inaudible] Protect the basic right to vote!
(END VIDEO CLIP)
...
SCHULTZ: Why did you compare Wisconsin’s governor walker to Alabama’s segregationist George Wallace?
JACKSON: Well, one has tried to block the vote and lost and Walker is trying to stop the vote and will lose.
— Discussion between Ed Schultz and Jesse Jackson on MSNBC’s The Ed Show, June 4, 2012.

MARTHA RADDATZ, SUBSTITUTE HOST: And now Wisconsin Governor Scott Walker, a GOP rising star and Tea Party favorite. He made his name taking on unions and is now a possible 2016 contender. Jon Karl is back with the inside story of a man who at one point was the most divisive politician in America.
...
JON KARL: Governor Walker, for a while, you were the most divisive man in America. What’d you learn from that?
— ABC’s Martha Raddatz and Jon Karl profile Walker on ABC’s This Week, November 17, 2013.

“I feel like this is the most important issue our nation is facing right now, and has for the last fifty, sixty years...There’s apparently over 100,000 people in the freezing cold in Wisconsin standing there, and they have been for the last eleven days? It took seventeen days to get the government in Egypt to stop abusing their citizens after thirty years of rule...I believe the people of Wisconsin were inspired by watching the people of Egypt...stand up to tyranny and dictatorship, a thirty-year dictatorship taken down in seventeen days of peaceful protest. The people in Wisconsin deserve our support...They are us.”
— Comedian Rosie O’Donnell on her March 1, 2011 satellite radio show.

Bill Maher: Was Scott Walker the Banjo Boy in Deliverance?

“Now that Scott Walker has survived his recall, he has to tell us once and for all was he that kid in Deliverance?”
— Bill Maher comparing Walker to the banjo-playing boy in the 1972 movie Deliverance, on HBO’s Real Time, June 8, 2012.

“I’d very much like to anally probe @govwalker each time he needs to make an ‘informed decision’”
— Sarah Silverman Tweet on July 5, 2013, after Walker signed a new bill requiring women to have an ultrasound before getting an abortion.