Jabbing Jindal: The Media’s Worst Attacks on the Louisiana Governor 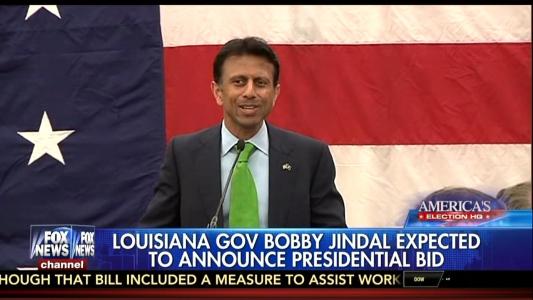 Louisiana Governor Bobby Jindal’s expected jump into the 2016 GOP presidential nomination race is bound to be met by skepticism, if not an outright dismissal, by the liberal media if their reaction to his 2009 State of the Union response and his advocacy of fiscally and conservative views is any guide. Some in the media have even stooped to make an issue of his Indian-American heritage.

Most recently The Washington Post promoted a Jindal profile by tweeting an insulting quote from a college professor who charged: “There’s not much Indian left in Bobby Jindal.” MSNBC’s Chris Matthews made the kind of remark filled with racial overtones that he would’ve attacked a Republican for, when he said of Jindal’s response to Obama’s SOTU address: “They had to outsource the response tonight, the Republican party.” CBS’s Maggie Rodriguez hailed how “Americans loved” Obama’s speech that night but called Jindal a “Debbie Downer.”

When Jindal opposed the Medicaid expansion that came with ObamaCare, because he was opposed to the idea of moving citizens off private care, he was accused of “endangering the health” of his Louisiana constituents by MSNBC’s Karen Finney. And when Jindal appeared at a prayer rally, ABC’s George Stephanopoulos blasted: “I was struck by the final line, ‘Our God wins.’ How do you think that lands in a country of 320 million people of many different kinds of spirituality, many different kinds of faith, many who believe in no god at all?”

The following are the media’s worst attacks (so far) on Jindal from the MRC’s archives:

“They had to outsource the response tonight, the Republican party. They had to outsource to someone who had nothing to do with Congress because the Republicans in Congress had nothing to do with the programs he was talking about tonight or the record he referred to.”
— Chris Matthews during MSNBC’s live coverage of State of the Union speech, February 24, 2009.

MSNBC’s Keith Olbermann: “What can the Republican response be?...How do you come out against recovering the nation’s sense of self and its optimism? How do you come out against words like ‘boldly, ‘wisely,’ ‘swiftly,’ and ‘aggressively?’”
Co-anchor Chris Matthews: “[Bobby Jindal]....is running for the outside rail of the Republican Party, the right-wing rail....That’s all the room that's left on that side because Barack has grabbed the center with the charm he showed tonight in his excellent rhetoric.”
— MSNBC's live coverage following Obama's speech to Congress, February 24, 2009.

“And Americans loved it. The polls show that they’re very optimistic, and then out comes Bobby Jindal, Debbie Downer, saying ‘hated it, it’s not going to work.”
— CBS’s Maggie Rodriguez discussing Jindal’s response to Barack Obama’s State of the Union Address on CBS’s The Early Show, February 25, 2009.

Scolding Bobby Jindal for Speaking at a Prayer Rally

“[Yesterday], Louisiana Governor Bobby Jindal headlined a massive prayer rally called ‘The Response’ in Baton Rouge....[to Jindal] Is it the job of a President to lead a spiritual revival? And I was struck by the final line, ‘Our God wins.’ How do you think that lands in a country of 320 million people of many different kinds of spirituality, many different kinds of faith, many who believe in no god at all?”
— Host George Stephanopoulos on ABC’s This Week, January 25, 2015.

“When he [President Obama] sees people like [Louisiana Governor] Bobby Jindal, you know, standing up, screaming about more federal action, more federal aid, well, six months ago, that’s not the person that Bobby Jindal was. He was a small-government, no federal aid kind of guy. And the President is calling out those people for hypocrisy.”
— Politico chief political columnist Roger Simon, talking about the BP oil spill, on MSNBC's Andrea Mitchell Reports, June 15, 2010.

“What do you say to Governor Jindal and others who are saying, you know, on the one hand, they’re rejecting the Medicaid expansion, on the other hand, they, you know, that ideology is basically endangering the health of their citizens?”
— MSNBC’s Karen Finney’s question to panelist on MSNBC’s Disrupt, July 1, 2013.