CBS Mornings was amused with co-host Tony Dokoupil calling it one of the “dramatic results” while the January 6-obsessed congressional correspondent Scott MacFarlane pivoted to the special election that’s given Democrats “the road map for midterms strategies” after highlighting results in Florida and the member-on-member fight in Manhattan between ultra-liberals Carolyn Maloney and Jerry Nadler.

“Democrat Pat Ryan won last night against Republican Marc Molinaro in the first competitive House election since the U.S. Supreme Court overturned Roe vs. Wade setting the stage for what could be the last national test case on whether abortion will drive voters in November,” he added.

After pointing out that Ryan will only serve a few months before having to face voters again, he framed the midterms not as whether there will be a red wave, but “if Democrats have momentum to preserve majorities in Congress or if Republicans are poised for victory.”

Dokoupil replied that while “[h]istorically speaking, it appears that Democrats are poise poised for big losses based on everything you know about politics...there are different issues at play here.”

MacFarlane obviously agreed and cited abortion as “a pivotal issue, but the question is: Will it be the pivotal issue for voters” and “transcend the kitchen table grocery price, gas price issue in every district” like it did for Ryan and his “abortion rights-first...platform.”

He closed his discussion with Dokoupil and his fellow co-hosts by offering more positive vibes for his friends:

I think Democrats are waking up optimistic, thinking there may be some wiggle room, some opportunity here if they nominate moderate, mainstream, some experienced candidates against Trump loyalists in some districts across America.

Over on NBC’s Today, co-host Hoda Kotb trumpeted “some rather unexpected election results” with one being “a Democrat pulling out a big win in a key swing district.”

Chief White House correspondent Kristen Welker called Ryan’s win “the biggest takeaway of” the night and proof “Democrats could put on a fiercer fight than expected to hold onto power with abortion at the center of it all” (click “expand”):

WELKER: But the biggest takeaway of all came in that special election in New York where the Democrat pulled out a victory over his Republican challenger running on a platform of abortion rights. The implications for the fall? Democrats could put on a fiercer fight than expected to hold onto power with abortion at the center of it all. In the last major round of primaries before the midterm elections, critical races in Florida and New York offer clues ahead of November and the night brought a big surprise in New York with even bigger implications.

WELKER: Democrat Pat Ryan winning in a special election in a bellwether swing district that has predicted every presidential election since 1996. Both parties glued to that race. Ryan campaigned on abortion rights, which Democrats hope can fire up key voters this year in the wake of the Supreme Court's Roe v. Wade decision. And Republican Marc Molinaro had focused on key Republican issues: inflation and crime[.]

WELKER: Now another big top line from the night: voters could be poised to send a Gen-Z candidate to Congress for the very first time. 25-year-old Maxwell Frost, who is Afro-Cuban, won his primary in Florida. And if he wins in the fall, which seems likely, he will be the youngest person in Congress, making him more than 60 years younger than the oldest person in Congress. Hoda?

In the 8:00 a.m. Eastern hour, Welker repeated many of the same lines, downplaying crime and inflation as “core Republican issues.” 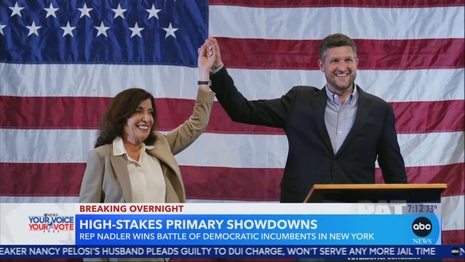 ABC’s Good Morning America was more focused on the Maloney vs. Nadler race, the Florida Democratic primaries, and, like Welker, fawning over a liberal member of Gen Z being poised to reach the House.

Liberal congressional correspondent Rachel Scott nonetheless hyped the race as a case of Ryan “defining the polls, winning his race in a key swing district” by having “made abortion rights a central focus of his campaign.”

“This was a big test for Democrats who are hoping that this becomes a driving issue and mobilizes voters in November,” she added.

Tuesday morning’s push to reenergize liberals by the networks was made possible thanks to advertisers such as Amazon (on ABC), Citi (on NBC), and Neutrogena (on CBS). Follow the links to see their contact information at the MRC’s Conservatives Fight Back page.

To see the relevant transcripts from August 24, click here (for ABC), here (for CBS), and here (for NBC).