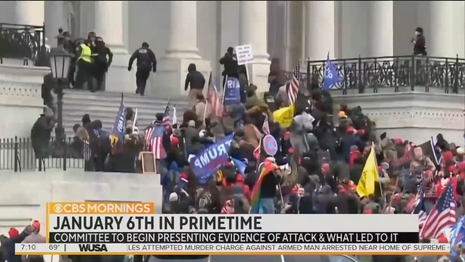 On Thursday ahead of the first primetime hearing of the House Select Committee hearing on January 6 (which could be described as Nancy Pelosi's third run at impeaching Donald Trump), the morning broadcast network news programs showed total devotion to the cause of their fellow leftists by spending over three times more airtime (3.1) on January 6 than the attempted assassination by a disturbed leftist of Supreme Court Justice Brett Kavanaugh.

CBS Mornings fill-in co-host Vladimir Duthiers lamented that these hearings will be “hard” to force Americans to tune into given “this fractured media society.” In other words, if only alternative media didn’t exist.

Congressional correspondent Scott MacFarlane told viewers that “[w]hile so many of the images are burned into our minds from that day, the committee says what we've seen and learned so far is just the beginning.”

Adding it’s an “unprecedented investigation” with five teams looking into different aspects of that day, MacFarlane framed opposition as partisan towards Trump, invoking a GOP congressman’s description of the day as a “tourist visit.” 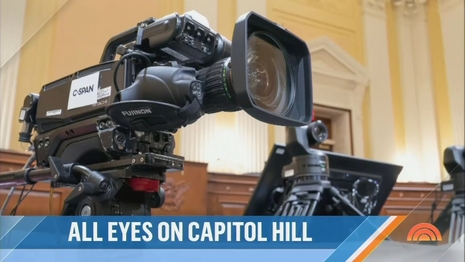 In the 8:00 a.m. Eastern hour, MacFarlane appeared at a touch screen to do his best impression of MSNBC’s Steve Kornacki that included a 3-D view of the Capitol grounds.

NBC’s Today was similarly enthused. Co-host Hoda Kotb said this in an opening tease: “All eyes on Capitol Hill. The January 6th committee set to hold its first public hearing on the insurrection, televised live from coast-to-coast in prime time.” Kotb added that they’d examine “what’s at stake...and potential impact it could have on the minds of American voters.”

White House correspondent Peter Alexander insisted “the images from that day are still haunting” for the country, but fretted its “impact has been waning” with “the committee...hoping to reverse that” and show “ongoing threats to American democracy.”

NBC’s Chuck Todd griped that “the people that are concerned” about American “will be watching” while those “that need to be concerned may not.” However, he conceded the committee’s hiring for a former ABC News executive might be a bridge too far.

As for Kavanaugh, each network had a full report, but each took their time getting there as it took until well after the 10-minute mark on CBS and NBC. CBS Mornings had the most on Kavanaugh with three minutes and three seconds, followed by NBC’s Today at two minutes and 45 seconds.

ABC’s GMA clocked in with two minutes and 25 seconds for a “big three” combined total of eight minutes and 13 seconds.

GMA co-host Michael Strahan used stark language, correctly stating it was an “assassination plot” and “scare.” Longtime ABC correspondent Terry Moran concurred, deeming it “another sign of the threat environment these justices face and of how unhinged the debate around the court has become.”

As CBS and NBC would, Moran cited past protests outside justices’ homes and identified the motive with the alleged suspect supporting abortion and gun control and fearing Kavanaugh wouldn’t advance his ideology. To Moran’s credit, he was the only one to mention how the Biden administration has faced heat “for not enforcing a 1950 law that makes it illegal to pick or protest outside a federal judge’s home.”

Over on CBS, Jan Crawford relayed that the suspect “believed that killing Justice Kavanaugh would give his life a purpose” and tied this to broader threats to the judiciary.

NBC’s Kotb called it a “shocking arrest” and “alarming scare amid amounting concern over the safety of judges across the country.”

Senior Justice correspondent Pete Williams touted Attorney General Garland’s response and providing justices security “after protests showed up at the homes of Kavnaugh and two other justices.” Of course, there was no ideological tie-in given.

That said, Williams called out the doxxing of the justices as the suspect “told [investigators] that he got the idea of coming to kill Justice Kavanaugh after finding the justice’s home address on the internet.”

If this had happened to, say, Supreme Court Justice Sonia Sotomayor and the suspect was a gun-rights or pro-life advocate, the time gap would be non-existent. And one could all but guarantee CNN and MSNBC would drop everything to have panels warning that the tens of millions of Americans constitute a national security threat.

The picture was even more grim when it comes to something that actually affects the American people: gas prices. 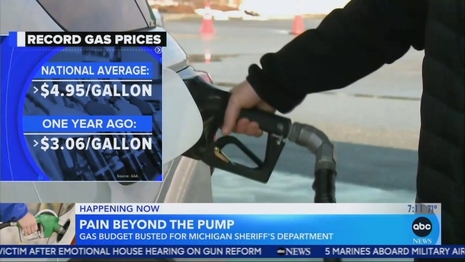 The three mornings shows tallied five minutes and 52 seconds of coverage, but it came almost entirely from NBC’s Today (four minutes and 45 seconds) while ABC’s GMA clocked in with 61 seconds with CBS Mornings having a pitiful, one-second nod to an actual crisis.

For the purpose of this study (and most we conduct at NewsBusters), we stuck to the first two hours of NBC’s Today to be in concert with the duration of mornings shows from ABC and CBS that air from 7:00 a.m. to 9:00 a.m. Eastern (meaning we exclude the third and fourth hours of Today).

In the interest of transparency, 3rd Hour Today did cover gas prices with a four-minute-and-41 second story thanks to correspondent Sam Brock.

January 6 was an awful day. It’s an event that should never happen again. The deeply partisan nature of the probe, the committee’s makeup, the left’s so-called remedies for our elections system, and a media ecosystem’s infatuation and obsession with the committee’s twists and turns make for something most Americans will tune out.