Embarrassing: ABC Sucks Up to Incompetent Jean-Pierre in Softball Interview

ABC’s Good Morning America has had a reputation of corporate whoring, liberal fluff, and superficial nonsense, so it made sense Tuesday as White House Press Secretary Karine Jean-Pierre appeared for a nine-minute-plus softball session with co-host Robin Roberts over the economy, “gun violence, abortion rights,” “her trailblazing role,” and what “representation means” to her.

Throughout an obscene six teases for the interview, co-host Robin Roberts boasted of how Jean-Pierre was “breaking barriers” and “making history in a new role” while lamenting all “the challenges” that have been “facing President Biden.” In other words, the skids were greased.

Roberts began with platitudes, gushing she had “been looking forward to having this opportunity especially today because with gun violence rising to the top of the agenda,” adding that ABC was doing its part for the administration by having all its news shows focus on guns.

Lamenting that Jean-Pierre had to start her job with two high-profile shootings, Roberts put the ball on the tee: “[T]here's been no major federal gun control in nearly 30 years, so what is the President doing to change that? What can he do?”

Jean-Pierre has been prone to lack an ability to speak coherently without prepared notes, so her answer to a softball question meandered through nothingness for nearly two minutes with all Roberts being able to do was off another softball about Biden’s involvement in Senate negotiations (click “expand”):

JEAN-PIERRE: Well, Robin, first of all, thank you so much for having me on and it has been a — a tragic three weeks with Uvalde and then Buffalo and I traveled — I traveled with the President to — to Buffalo to talk to the grieving families — the grieving — the grieving families of the ten who were doing what — what many of us do on the weekends, go to the grocery store and sadly, their lives were taken by this public health epidemic that we're seeing of gun violence and then we traveled sadly to — less than two weeks later to Uvalde and the parents — there meeting the — the President meeting the parents and grieving with them and their family and I was there when they cried out to the President to do something, to take action, and, you know, I had time with the President afterwards and I — he is just as committed as he was when he was a senator. He talked about 30 years ago, we — there was the assault ban weapon [sic] in 1994 that expired ten years later that the President led on when he was then-senator, as Vice President he played a role with dealing with gun violence when he was in office with President Obama and now as President himself. He has taken on or he has signed the most executive actions than any — any other President at this time in their term and so this is a priority for him. This is a very serious issue for this President, but right now, we're watching what Congress is doing, because we can't do this alone. He cannot do this alone and we're very encouraged. He's very encouraged with what Senate is trying to do — the bipartisan negotiations that we're seeing now because we haven't seen — to your point, Robin, we haven't seen real legislation really move forward in 30 years so this is significant. This moment is significant and so we want to see the Congress continue to move forward.

ROBERTS: Is he personally — personally lobbying these politicians, these congressmen?

JEAN-PIERRE: So I'll say this, the President has been very clear. You know, he made his speech on Thursday. He spoke directly to the American public, continued to lay out the importance of dealing with gun violence, how this is destroying schools, clearly, and communities and how we have to act now and we cannot wait any longer. But he wants to give the Senate and Congress on the Hill some space to have that conversation. It sounds like as you know, Senator Chris Murphy and others —

JEAN-PIERRE: — have been leading this effort. It sounds very promising. We are encouraged by it. Our staff, our office of leg affairs have had direct communications with negotiators on the hill since Uvalde and have spoken to them dozens of times and so that is — that is how we have been really dealing with this, making sure that we can do whatever it is that we can do at our end and getting updates from them as well.

Roberts thanked Jean-Pierre for her answers before moving to inflation and citing ABC News polling that contradicted Roberts’s own claims about gun control being paramount with the inflation being something “80 percent of Americans say...is an extremely or very important factor in how they’re going to vote and just 28 percent approve of President Biden's handling of inflation.”

Instead of pressing, Roberts lobbed another joke of a question: “[S]o what does the administration have to do because I don't have to tell you a lot of people — a lot of people that are struggling to make ends meet.”

Jean-Pierre resumed her lengthy answers that centered around claims that not only does the White House feel the pain Americans are facing, but President Biden does because he’s lived a life where “prices [going] up just a bit...impacted their lives.”

Roberts moved on without challenging her for more answers on inflation or why actions they’ve taken haven’t worked. Alas, America’s highest-paid newscaster transitioned to “the other big issue,” which she said was abortion. 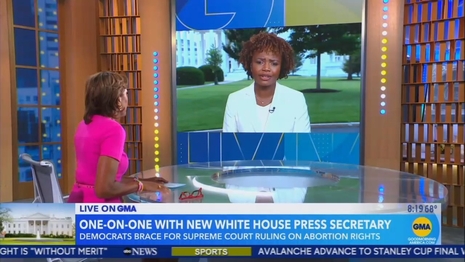 “[I]t seems possible the Supreme Court is going overturn Roe vs. Wade, so what can the President offer if it's all going to be in the hands of the individual states,” Roberts added from the left.

Jean-Pierre trashed the proposals of pro-lifers as “extreme” and contrary to what actual Americans think and reiterated the need for the Senate to “codify Roe v. Wade” (even though it would have gone beyond that).

Roberts wrapped with fawning praise for Jean-Pierre as “[t]he first black, the first immigrant, the first openly gay person” with her job and an open ended question about “what does representation mean to you” (click “expand”):

JEAN-PIERRE: You know, Robin, it means so much. It means so much because what I hope and what I didn't have when I was growing up is that any young girl or young boy when they look up, they see me, that they know they can dream big and even dream bigger and how important it is to have that representation and the reason that I'm here is because we have a President who believes and understands what it means to have representation and understands that representation does, indeed, matter. We have an administration that is historically diverse. That is because of the leadership of this President. You know, I — I think about my daughter, I think about her friends and I hope that, when she sees me on TV, she thinks to herself, I can do this and I can do more when I'm — when I’m older and so it matters so much. The last thing I do want to say is I'm here because I am standing on so many shoulders. I'm standing here on people who have really sacrificed so much and I'm learning from their brilliance. I'm learning from their sacrifices because I would not be standing here, I would not be at that podium being a spokesperson for the President of the United States — which is truly an honor and a privilege — without the people who came before me.

And even the goodbye was gooey from Roberts: “Very kind of you to say. Well, Karine, thank you so much. I know that you have busy, busy days and means a lot you some spent time with us this morning. All the best to you.”

ABC’s clownish attempt at state-run media was made possible thanks to advertisers such as Google Pixel and Popeye’s. Follow the links to see their contact information at the MRC’s Conservatives Fight Back page.

To see the relevant ABC transcript from June 7, click here.