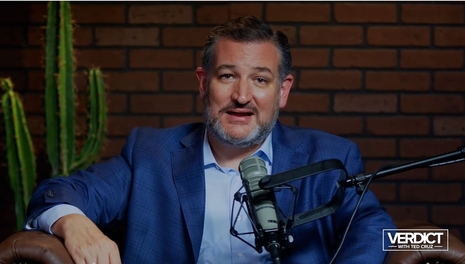 Monday’s Dallas Morning News had a piece about Trevor Reed, the former Marine recently returned to the U.S. from a Russian prison as part of a prisoner swap, but instead of keeping the focus on Reed’s condition or the push to ensure the safe return of other Americans, journalist Emily Caldwell reported Reed’s father Joey trash Senator Ted Cruz (R-TX) by alleging he’s a Putin stooge.

Worse yet, Caldwell quoted two far-left Resistance liberals in Jonathan Franks and Jeremi Suri and refused to mention their virulent hatred for Cruz. So much for basic journalism and disclosures, Emily.

Down in paragraph 21, Caldwell cited Suri as some sort of objective expert, quoting him as “a professor of history and public policy at the University of Texas at Austin and an expert on contemporary politics and foreign policy.”

Caldwell explained that Suri told her “it’s not uncommon for the State Department to ask lawmakers to avoid saying things publicly that could undermine any negotiations going on behind closed doors,” but it’s an entirely different matter for Cruz.

In the updated piece, she put on kid gloves to allude to Suri’s disdain for Cruz by saying he’s “overly criticized Cruz on social media” (click “expand”):

But, as Suri sees it, Cruz hasn’t exactly made a habit of abiding by guidance from the executive branch — especially during Biden’s presidency.

“Oftentimes, the State Department does ask senators and members of the House to quiet down on certain things, but rarely, rarely if ever, has Senator Cruz followed that,” Suri said. “So it would be strange if in this case, he listened.”

Suri, who has overtly criticized Cruz on social media, said the senator might be overblowing his role in U.S.-Russia relations.

“He is not held in a special category by Russian diplomats, I can tell you that as a fact,” Suri said.

In reality, Suri's anything but a sober expert. On March 22, Suri tweeted that Cruz “is a menace to democracy” with the hashtag “Worst Senator.”

Just over a month earlier on February 18, Suri said: “Ted Cruz consistently condemns people for exactly what he does, even worse. #ResignTedCruz.”

Needless to say, it’s a bit of a stretch to summarize Suri’s views toward Cruz as “overly critic[al]...on social media.”

Caldwell also quoted Jonathan Franks as a family spokesman, but she again engaged in bias by omission. Franks is a liberal activist who has a history of sexist and racist remarks, previously served as an aide to House Majority Leader Steny Hoyer (D-MD), and served as spokesman for actor Montel Williams.

Franks pleaded Tuesday morning to “not make” the issue of detained Americans “partisan” as he has “a long list of Republicans whom I think have gone out of their way for the wrongfully detained,” which is certainly true and something Americans across the spectrum should support. However, transparency matters as well.

Despite having tweeted that admirable view, Frank’s far-left takes have continued, including one from Saturday in which he attacked former White House Press Secretary Kayleigh McEnany for raising conflict of interest concerns about incoming Biden Press Secretary Karine Jean-Pierre.

And back on March 27, he lamented that White House “senior staff” don’t “seem to understand what makes Joe Biden so special.”

Most of Caldwell’s piece consisted of Joey Reed’s allegations against Cruz, calling him “an embarrassment to the state of Texas” and so much so that he “will work for” anyone who wants “to defeat that son of a bitch.”

Cruz’s office partly confirms the Reeds’ account. The senator refrained from taking a public stance on Trevor Reed’s captivity out of concern for antagonizing Russian strongman Vladimir Putin. But, aides said, that doesn’t mean he wasn’t working behind the scenes.

“We were repeatedly advised by Administration officials that my taking a public role in this specific case would be counterproductive, and that because of my role fighting to stop the Nord Stream 2 pipeline, leaders in Russia may well have linked the two issues,” Cruz said in a statement to The Dallas Morning News. “That would have endangered Trevor and delayed his release.”

Cruz said he’s “very sorry that Trevor’s family interpreted this as not prioritizing his release, and my heart breaks for them for having to endure all the pain of Trevor’s imprisonment ... Fighting to free American hostages wrongly held by tyrannical governments is a deep personal passion, and I have spent my entire Senate career fighting to release Americans in captivity.”