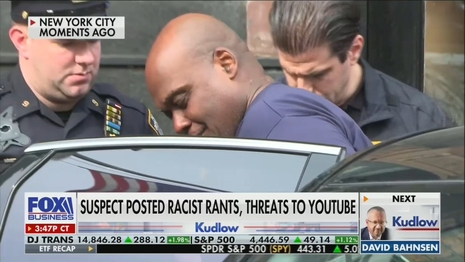 The Washington Free Beacon penned a Monday morning editorial warning that, based on the liberal media’s minimizing of the racist and hateful views of the NYC subway shooter and use of a Michigan police-involved shooting to harm race relations, future race-based acts of violence could soon be around the corner thanks to the their penchant for racial division.

The editorial began with a reference to a Thursday study from editor Charles Lehman that found, in their summation, “the media harp on violence carried out by whites and downplay it when the perpetrator is black.”

Frank James, the man arrested for Tuesday's New York City subway shooting, is a black nationalist and outspoken racist who railed against whites, Jews, and Hispanics. A careful reader of the New York Times could be forgiven for overlooking that. In a nearly 2,000-word article on the attack, James's race is not mentioned. The same is true for the coverage offered up by Reuters; the Washington Post only mentioned James's race in relation to his condemnation of training programs for "low-income Black youths."

A Washington Free Beacon review of hundreds of articles published by major papers over a span of two years finds that papers downplay the race of non-white offenders, mentioning their race much later in articles than they do for white offenders. These papers are also three to four times more likely to mention an offender's race at all if he is white, a disparity that grew in the wake of George Floyd's death in 2020 and the protests that followed.

The Free Beacon collected data on nearly 1,100 articles about homicides from six major papers, all written between 2019 and 2021. Those papers included the Chicago Tribune, Los Angeles Times, New York Times, Philadelphia Inquirer, San Francisco Chronicle, and Minneapolis's Star-Tribune—representatives of each paper did not return requests for comment for this article. For each article, we collected the offender's and victim's name and race, and noted where in the article the offender's race was mentioned, if at all.

The data suggest an alarming editorial trend in which major papers routinely omit information from news reports, presenting readers with a skewed picture of who does and doesn't commit crime.

The editorial noted the study went live a day after the subway attack in which the suspect is a black nationalist with what The New York Times could only describe as “harshly bigoted views.”

The Free Beacon put that in contrast with a Grand Rapids, Michigan shooting in which 26-year-old black male Patrick Lyoya was killed after a white officer fatally shot him during a struggle that began with Lyoya fleeing a traffic stop and grabbing the officer’s taser amid a struggle.

Subsequently, the media have rushed to uncritically promote the latest rhetoric from those such as racial arsonist Benjamin Crump.

To see more of the editorial, click here and to go here to see Lehman’s full study.