Over the course of his first two segments totaling north of 19 minutes, Abrams played numerous clips to then eviscerate the “astonishing” “cuckoo stuff” peddled in their “alternative universe” by Putin “stooges” that, prior to the European Union’s axing of RT, was “available in more than 100 countries,” including the U.S.

Abrams said that his team spent Thursday watching “the Russian-owned news channel..so you don't have to” as “news networks across the political spectrum [brought]...information about the horrors of what's happening at Putin's hands.”

He added that what they found was “astonishing” as, in contrast to the reality of “hundreds...dying...as Putin tries to...fulfill some sort of historical vendetta,” RT was spinning the war as “justified” inside “an alternate universe” with Putin trying to “rescue the Ukrainian people in Donbass, who have been subjected to attacks, torture, and killings by the government there. “

Abrams went through some examples of what his team saw as well as soundbites from RT that led him to refer to as “truly cuckoo stuff” (click “expand”):

ABRAMS: Highly-produced segments, including some with western or American accents, talking about children being shot at by Ukrainian soldiers and about the lies being told by American and European officials about Putin. There's even a — a phony Crossfire-like talk show hosted by an American named Peter Lavelle that pretends to debate the invasion is if it's a two-sided question. The guy even wears an RT pin where I wear my American flag pin. They also have a large graphic that appears before many segments claiming that this is actually day 200 — 2,525 of the war, which they say started in 2014 when Russia annexed Crimea claiming, of course, at the time, they were protecting ethnic Russians from far-right extremists in the region. An RT reporter even alleged that much of the footage is appearing on other networks is actually old footage from previous wars. They have graphics on the screen which say things like, “Disarming Ukraine,” An “Operation in Ukraine Comes After Months of failed” Western “Talks.” 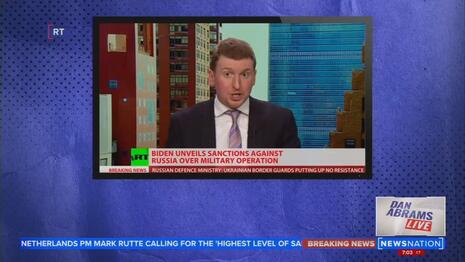 SOURAYA FAAS: What Putin is doing at every right to do. At the end of the day, he was defending those two nations that he just made independent from ongoing years of war that Ukraine has been inflicting.

PETER LAVELLE: Welcome to CrossTalk where all things are considered. I’m Peter LaVelle. Moscow repeatedly warned it would not tolerate Ukraine being used by NATO to threaten Russia's national security.

CALEB MAUPIN: Russia has made clear it has no intent to invade Ukraine. However, at this point, they are engaging in an operation to protect the people of Donetsk and Luhansk and make sure they do not continue to face the shelling and bombardment they have been enduring for the past eight years.

PAULA SLIER: The president of the European Commission Ursula von der Leyen has said that Putin chose to bring war back to Europe. Now, this is factually incorrect. You need to remember, of course, that the war has been ongoing since 2014, so that's eight years and the western media and western government are at fault for not pointing out.

During a segment with a former RT anchor (which went off the rails as she fixated on how Fox News was part and parcel with RT), Abrams touted the U.S. coverage as having uniformly said “Putin is the bad guy” whereas RT’s been arguing the conflict was “understandable and justifiable” with a need to propagandize about why “Putin had to do this.”

Abrams played another clip from RT’s Rory Suchet claiming the Russian military was posing “no danger to the Ukrainian population” before again calling out RT employees: “[W]ho are these — and apologize using this language — but these stooges who are willing to go on television...and sort of restate...Putin’s completely fictitious explanations for what he is doing.”

In a second segment, Abrams made the case for RT being kicked off American TVs, noting Germany made the move last year and, in the U.S., “RT has been registered as a foreign agent since 2017” with “U.S. intelligence agencies call[ing] it Russia's state-run propaganda machine.”

An editor for Mediaite (which Abrams founded), Colby Hall noted that “RT was always sort of a joke,” but the war has made their “propaganda...no longer just a funny joke” and instead “really sort of dangerous.”

The two also got into how RT could be kicked off the air with both arriving at the conclusion it should fall on cable provides and/or pressure on them to drop RT, not unilateral action by the federal government (click “expand”):

HALL: I think it's really impossible to break a contract. I mean, these cable providers, they have their deals and they can’t just break the contract. What do they replace it with?

ABRAMS: And there's also an argument, by the way, that they knew what they were signing up for, right? I mean, they can't say, well, you know, they've changed their programming. It's like you signed up a Russian propaganda news network. You have a Russian news propaganda network.

ABRAMS: It's a fully distributed cable channel, meaning it is on almost every cable system. Now, whether they're paying to be on those channels, et cetera, who knows. But yeah, I do think — look, I don't think the government should get involved, right? But I do think that there should be pressure on some of these — and in particular, some of these hosts who are on there who are saying these cuckoo, Putin talking points issue and it’s funny because my previous guest was saying, “well, can hear this on other networks, etc.” Yeah, there are arguments to be made, absolutely, about some of the things we've been hearing on — on other networks that sounds like it's pro-Putin, but what we heard — what we were listening to today was literally explanations for why Putin had to do this.

HALL: Right. It's dis-information. It's literally, like, the opposite of the truth and, yeah, you can say defining propaganda is a slippery. It's very, very subjective. In terms of, like, public pressure. I think the most recent case would be One America News, which is a far right — it got dropped by DirecTV. They weren’t really dropped. Their contract ended and AT&T, under pressure, said we're not going to renew.

Hall closed by alluding to the public campaign to have DirecTV drop One American News Network (which, unfortunately, was successful) and suggested that, if people spent resources kvetching about OANN having a platform, the same could happen with RT:

I think there was public pressure. There was a campaign and yes, it was far-right. One — OANN — is — is not a reputable outlet by any means. But compared to RT and what they're saying, at least there's — they’re somewhat rooted in the truth and if — if there's going to be a campaign to take One America News off, then, you know — but again — a lot more people are paying attention to RT now because of what's happened.

To see the relevant NewsNation transcript from February 24, click here.