All week, MSNBC’s The ReidOut host Joy Reid has shilled for the Biden administration amidst the embarrassing and deadly collapse of Afghanistan that’s trapped thousands of Americans and Afghan allies. On Monday, Tuesday, and Wednesday, Reid’s spin ranged from arguing this was what the American people wanted to blaming Donald Trump for the calamity to denouncing Afghans and the U.S. military.

Reid came locked and loaded on Monday, starting with an argument that it was the three prior administrations (and not Biden) that created this atmosphere, with Trump having penned “America’s exit strategy and bragged about” what “set the stage for the problems that we’re seeing now.”

Along with the AP’s Jonathan Lemire gushing that Biden’s Monday speech “was remarkably candid,” Reid lamented that Biden was taking “attacks from the right and unrelenting criticism from the media.”

Reid then gave way to Nichols, who expanded upon his Atlantic piece that blamed you and every other American for the tragedy: “[T]he criticism here is that Biden is screwing up the execution of an idea that everybody wants to do.”

“And Biden finally just said, ‘okay, I’m going to give you what you want.’ And now, there are people saying, ‘well, I didn’t really want that. I didn’t know that, you know, pulling out was going to look like this,’” he added. 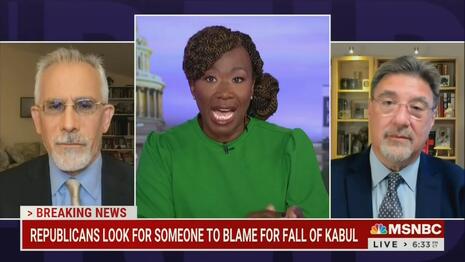 Later, he fretted that Republicans were “mak[ing] hay” even though it’s the American public who should be under the microscope for “not hav[ing] a stable set of preferences about this.”

Corn similarly made it about Republicans by sneering that they’re “out trying to exploit the lies” by showing “ignorance” and “uncaring just to score political points, while Afghans are...in a troubled condition.”

Also on Monday, Reid planted the seeds of this poisonous narrative that not only did the right writ large not care about Afghans, but also wanted to keep them from our shores. Her reasoning? Well, 16 House Republicans voted against Afghan visas and the GOP won’t go along with the January 6 committee.

Reid’s Tuesday charade featured more of the same with Reid and former Obama official Richard Stengel lamenting that Team Biden’s hands were tied by the desires of the American people and Trump’s actions.

All of which, Reid said, served as a reminder that “wars end ugly” and “[t]his is what it looks like when you get out.”

Reid’s pretzel-twisted logic also took an ugly turn when she claimed the right “has seized on” the “truly heartbreaking” scenes “to score political points.”

Ignoring his national security credentials, Reid smeared Congressman Mike McCaul (R-TX) for having said Biden will “have blood on his hands” for the Taliban’s takeover, insisting that he lives in and supports a state that’s killed “more than 54,000” Texans with the coronavirus because of Texas GOP Governor Greg Abbott and a president in Trump who’s murdered “626,000 Americans.”

“You see this newfound outrage, it just stinks of political opportunism. This is after all the party that stood by as the bloated retiree banned Muslim immigrants, buddied up to the Taliban and shut our doors to refugees who needed our help,” she added.

But Wednesday was even dumber.

After leading with a Covid segment, Reid continued to ignore support on the right for Afghans by arguing that “Republicans pretend they got everything exactly right for the past four years” while they hurl “predictable xenophobic attacks.” 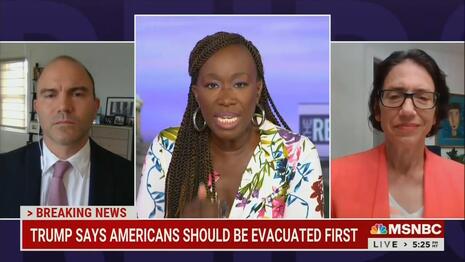 Once she got to Afghanistan, Reid employed the late Donald Rumsfeld’s terms of “known knowns” and “known unknowns” to proclaim that Biden has had to fly blind: “[T]he truth is that, no matter what the vast majority of instant Afghanistan experts will tell you, we don't know a whole lot.”

Going beyond parody, Reid ranted about the GOP for possessing “craven political hysteria” while gushing over a Matthew Dowd tweet that said Americans must “support [Biden] vigorously” because “GOP feels no shame and Democrats feel shame way too quickly.”

Speaking of parodies, the queen herself and Hack Madness champion had an argument to stammer through about why Biden’s done an excellent job considering how everyone else around him (including servicemen and women in Afghanistan) have been anywhere from dishonest to incompetent (click “expand,” emphasis mine):

RUBIN: First of all, I think you're exactly right in saying that we never fully appreciated that what we were asking the Afghans to do, to form this central army of hundreds of thousands of people with a national identity was never going to happen. That was antithetical. And the other thing is I think the military's inclination to say — salute and say, “oh, yes, we can do it.” And, “oh, yes, it's working.” And, “oh, yes, things are getting better.” And although they may not feel like they're lying, they're just being optimistic. In fact, they begin to delude themselves and, therefore, they give bad information to presidents, they give bad information to Congress and the American people and when we go back and look at this, you're going to see a slew of generals, admirals, secretaries of defense, all getting up there and telling us the Afghan army is really making progress. We really see them. They are a tremendous fighting force, on and on and on. And it never happened. I think the downside of this going on for very long and then having Donald Trump as President is that he put President Biden in the worst possible position. First of all, he drew down to 2,500 troops —

RUBIN: — which made them very vulnerable. Secondly, he had ceased processing any of the special visas. They hadn't been processed since March of 2020. There were 17,000 applications back loaded and he dumped this into Biden's lap. What was Biden to do? Was he going to insert another 10,000 troops to try to get the Americans out, to try to get all of the Afghan partners out? That simply wasn't feasible. And then when — I think what happened, although we'll find out I'm sure, is that he was told, “don't worry, you have months and months to pull this off even if we have to go, the Afghan government will oversee it, we'll get people out” was spectacularly wrong. And maybe we should have expected it to be spectacularly wrong because we never understood really what we were working with. We never understood the Afghan army to begin with. If we had —

RUBIN: — we would have been able to take the handoff earlier than 20 years. Maybe the CIA is great at reading the enemy, but they're not very good at reading our own allies.

Rubin seemed to have conveniently left out why the State Department went dark in March 2020 and had yet to fully resume to the point where American passports are stalled. Huh.

Reid concurred by telling Rhodes that Trump wouldn’t have done anything to evacuate people in the event of the country collapsing.

Once Rhodes spun up this nonsense about how the GOP lack any “moral standing” because they would have “slam[med] the door in the face of all these people,” Reid peddled her GOP stereotype. And to end the show, she argued that while the Taliban are evil, former Vice President Mike Pence is also an evil person (click “expand”):

REID: And — and those are the people who prove they want to live in a modern context and so there is every reason to bring them here. Absolutely right. And I hope for my profession, for journalists, I would like to see them ask every single Republican who's screaming at Joe Biden right now how many of those Afghans are you willing to accept coming into this country? How many of you want in? I bet you a lot of their answer is zero. The outrage is so fake.

REID: Now, of course, Republicans, along with Orange Julius Caesar, would love for us to all conveniently forget Trump's role in the withdrawal from Afghanistan and blame it on Joe Biden. Trump’s official Renfield — completely with a fly on his head — aka Mike Pence — had the gall to write an editorial in The Wall Street Journal accusing Biden of breaking the deal with the Taliban by extending the date of the withdrawal. Zero mention at all of Trump's agreement to free 5,000 Taliban prisoners, many of whom went straight to the battlefield to fight for the enemy side or the sanctions that he lifted on Taliban leaders. That’s all pretty bad. But while we could spend hours on the GOP’s hypocrisy, even worse on this line from Pence: “Weakness arouses evil and the magnitude of evil now rising in Afghanistan speaks volumes about the weakness of Mr. Biden, says the man who was so obsessed with what his Dear Leader thought of that he literally played Simon Says, Put Your Water Bottle on the Floor edition. And if you want to talk about evil, there's no one who decided to blindly stand by his man as he committed evil separating children from their families or calling white supremacists very fine people like Mike Pence did.

Reid’s venomous rhetoric about the right hating immigrants and excusing Afghanistan’s collapse was made possible thanks to the support of advertisers such as ADT, Allegra, Allstate, and Liberty Mutual. Follow the links to see their contact information at the MRC’s Conservatives Fight Back page.