Well Then: Capitol Police Say GOP Rep. Is NOT Under Investigation After HuffPost Claim

On Friday afternoon, FoxNews.com’s Audrey Conklin torpedoed a claim from Huffington Post reporter Matt Fuller that said Congressman Russ Fulcher (R-ID) was under investigation with Capitol Police for having “manhandled” an African-American female officer at a security checkpoint.

Worse yet for Fuller and a few other news outlets, the Capitol Police itself released a letter to accompany both Conklin’s reporting and Fulcher’s denials, stating that “there is no current investigation into an alleged or rumored incident....involving Congressman Fulcher.”

First, Fuller’s claims. Back on February 17, he sent out a ten-tweet thread saying he had been interviewed by Capitol Police about two investigations with one pertaining to “the potential assault of an officer by a Member of Congress.”

Fuller insisted he was a witness to the white Republican “manhandling” and “very aggressively brush a female officer aside after he set the magnetometer” outside the House chamber on January 12, just six days after the January 6 terror attack.

Fuller added in another tweet and, in the next, he tied the incident to those who stormed the Capitol: 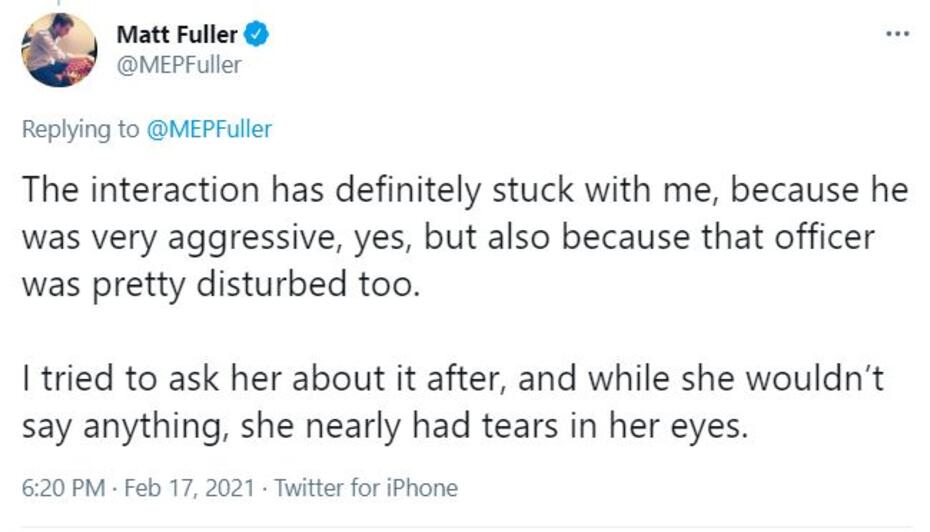 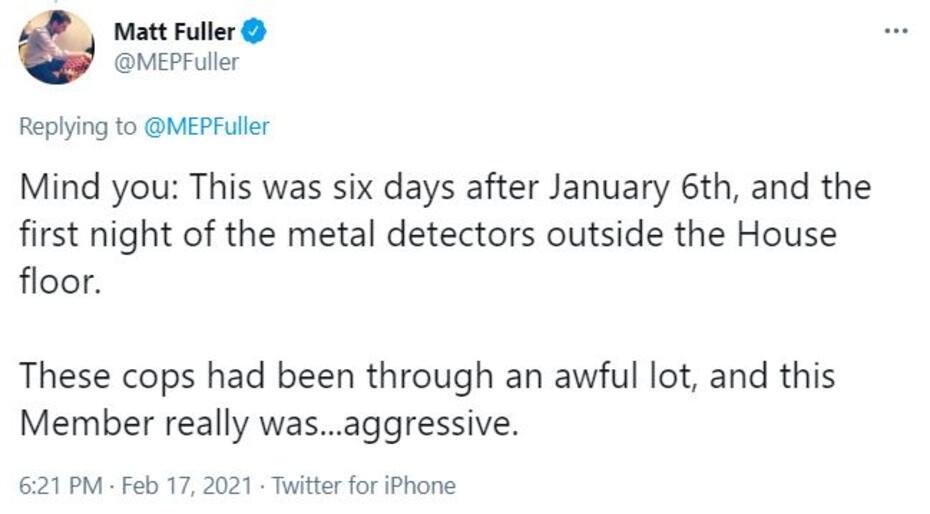 Fast-forward to the seventh tweet and Fuller insisted that the story has to be “bigger news” while, in the next one, he mocked a Fulcher thread supporting Capitol Police as “pretty rich.”

Things festered as Fuller’s tweet spread, both locally and nationally. Back in Idaho, Boise-area NBC affiliate KTVB promptly published an item on February 17 and then Idaho Statesmen and Spokesman Review penned a story the following day.

Over on the national level, MSNBC.com mentioned it that same day in a news round-up from Rachel Maddow Show producer Steve Benen as well as the left-wing blog Raw Story.

The New Republic flagged this incident on February 13 as part of a piece claiming Republicans do not actually support “law and order” while New York Magazine, Vanity Fair, The Washington Post, and The Week, The Wrap did the same on February 12.

Others to have covered Fulcher and/or the debunked probe included The Daily Mail and Talking Points Memo.

But as we learned on Friday, there was no “current investigation” and, as a result, Fulcher said this in a statement:

This situation has been demoralizing to me and distracting to the people I represent. Attacks on policy positions are one thing, but this was designed to tear down character. Unfortunately, this instance represents just one symptom of the cancel culture on Capitol Hill. This culture is to create and celebrate as many partisan controversies as possible. The statue of Freedom behind razor wire - to imply ongoing, critical threats from citizens. Metal detectors on the House floor - to imply member-to-member threats, and members portrayed guilty of fabricated controversies with no due process. We have got to find a way to flush the divisiveness if we are to provide the American people the representation they deserve.”

These people will do anything to use the events of January 6 to label any and all conservatives and Republicans as insurrectionists and terrorists, so anytime liberal journalists spin up some nonsense, it has to be both called out and mocked.