This all stood in stark contrast to their collective meltdown over President Trump's Thursday night remarks, which were widely condemned by figures such as CNN senior political commentator and former Senator Rick Santorum and Fox News Channel host Bret Baier and Martha MacCallum (and with a level of sobriety most Zuckerville residents lack).

Tapper added his relief that Biden “talked about the voting process and the counting process, and how it can be numbing, in his words, but people need to remember that the tallies don't represent just numbers, these represent voters.”

Chief political correspondent Dana Bash was exuberant, gushing over she was struck by “how big that speech was,” boasting it was “[b]ig and all encompassing, and not just about the specifics...but about democracy and coming together and the need for a more perfect union.”

Looking forward to Biden being declared the election winner, Bash boasted that Biden gave them “a soaring speech” symbolizing “the pivot from candidate to President-Elect, rhetorically.”

Political correspondent Abby Phillip concurred, noting that Biden insisted “the purpose of our politics isn’t total, unrelenting warfare” and proclaimed “a mandate” to implement his agenda.

A few moments later, Bash and Phillip continued to wax poetic about Biden and the Democratic map (click “expand”):

BASH: [I]t was not about him. It was about the country and about what he's going to do. The other thing I thought was really, really telling, and I think we're going to see a lot more about this is, if he does win, if he does get the first state, Georgia, and the last state there, Arizona, that's a huge deal for a Democrat, to be able to claim wins in those two states, if, in fact, it does happen. Particularly if you look at, he talks about the blue wall, rebuilding that, when you talk about the Midwest, but he's also talking about the southwest, and a totally different kind of Democratic Party that is alive there.

A day after he called President Trump “an obese turtle on his back flailing in a hot sun,” AC360 host Anderson Cooper didn’t hurl the same, juvenile insults at Biden.

Instead, he fawned over what he saw as a “normal and traditionally presidential speech” and “soaring given what we've become used to in the last four years” that delved into “the human losses” and “economic losses” (and as if to suggest the Trump administration doesn’t care about either).

Chief political analyst Gloria Borger fixated on how much she loved Biden’s speech that “applauded democracy” and was “about America” compared to Trump’s Thursday night White House statement.

Click “expand” to see how Borger’s words matched up with what liberal political commentator and former Obama official Van Jones said because, unsurprisingly, there’s no daylight between how a CNN journalist and a partisan actor see their new leader:

BORGER: When you think about Donald Trump's speech last night, it was all about challenging the legitimacy of the process, undermining democracy, you know, charging falsely that, you know, votes weren't counted, et cetera, et cetera, but that the votes should stop being counted. Biden tonight spoke about the legitimacy of democracy and applauded democracy, and praised the way it works. He was optimistic, he was not full of grievance. This wasn't about me, me, me. It was about America, America, America and being president of all Americans. And when I listened to it, I thought, okay, this is a speech that was kind of written by professionals who understand what it's like to be a gracious winner and to behave that way.

JONES: I'm happy. I’m going to say — [BORGER LAUGHS] I like the speech. I liked the empathy. I liked the optimism. I — I like it. This is good and you know, this guy has done me a lot of help, okay? If he wants to do what he's talking about, if he wants to bring people together, he's going to need a lot of help and he's asking for it, and he's worthy of it. Winston Churchill says deserve victory. That’s a man that deserves the help of a nation to get together. I liked the speech. And the other — just — when he talks about civility, that shouldn't be corny stuff. Civility. That's what we were raised by, that’s what we were raised to be[.]

Senior political commentator and former Senator Rick Santorum (R-PA) provided the only opposing view, taking issue with Biden claiming “a mandate” because “I think Republicans don't see it that way.”

But before moving onto White House chief of staff Mark Meadows testing positive for the coronavirus, Cooper had senior political commentator and former Obama adviser David Axelrod sound off on how nonpartisan Biden sounded and would be:

I think one of the most important things he said had to — we may be opponents but we're not enemies. We're Americans. We need to get past the anger and the — we need to put the anger and demonization behind us and he promised to be a president for everyone. We don't have a minute to waste on partisan warfare. I think these are important messages at a time when the country is on sort of a jagged edge after a very, very rough campaign.

Yeah, right. According to CNN, we’re supposed to believe Biden will only bring about unity despite the fact that, just recently, he called people on the other side of the aisle “chumps” and “ugly folks.”

This pivot to become state-run TV for a Biden administration was supported by advertisers such as Michelob and Rocket Mortgage. Follow the links to the MRC’s Conservatives Fight Back page. 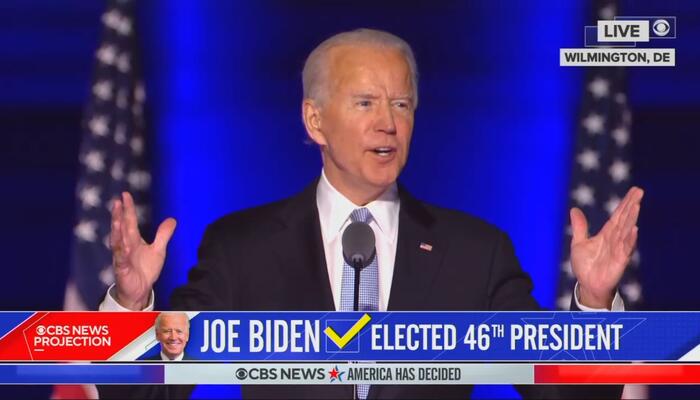 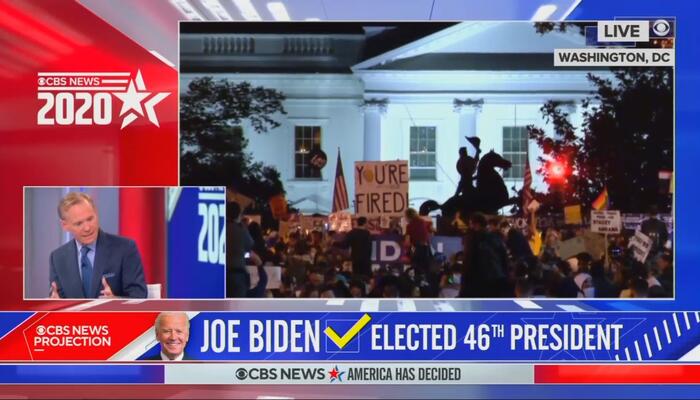 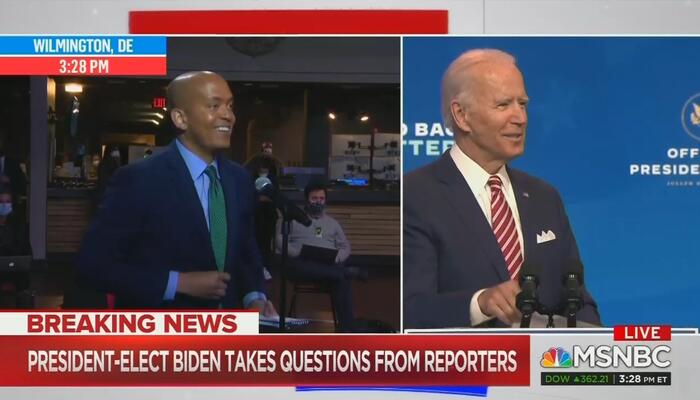 LAME: Journos Suck Up to Biden on COVID, Trump Being ‘Threat’ to Power 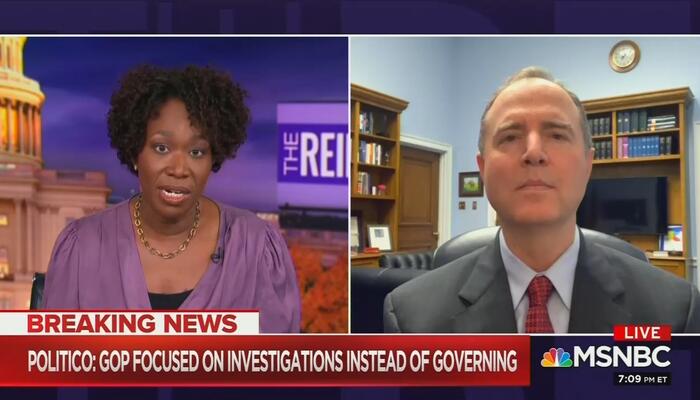 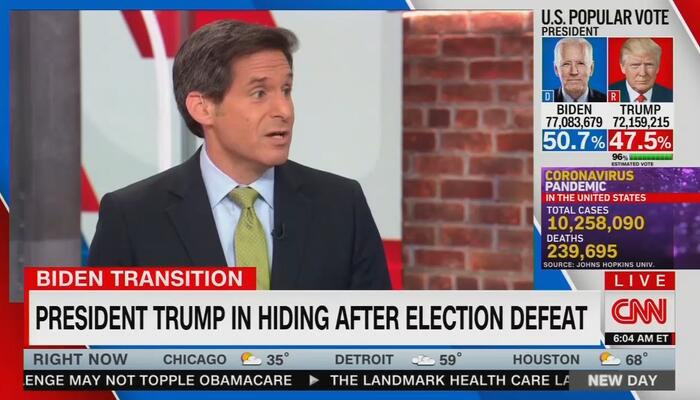 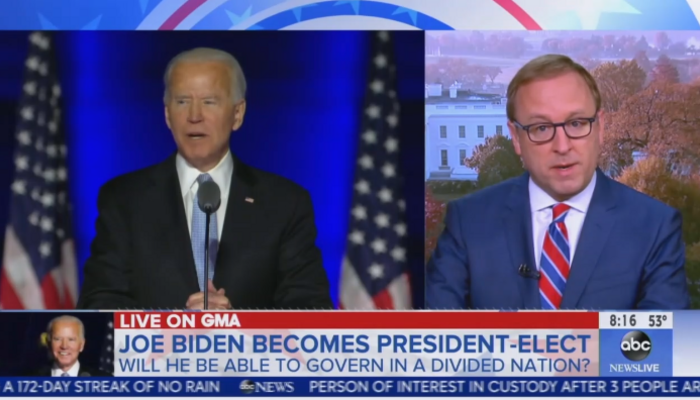