They Have Their Scalp: NYT Editor Bows to Mob, Resigns Over Tom Cotton Column

For Bennet, he was shoved out after his section published a June 3 op-ed by Senator Tom Cotton (R-AR) that dared to praise peaceful protesters and support the use of the military to support police in cities where riots had broken out.

In a staff memo, publisher A.G. Sulzberger claimed that “we saw a significant breakdown in our editing processes, not the first we’ve expressed in recent years.”

What about Wischnowski’s sin? He was pushed off the proverbial cliff for an article with the headline “Buildings Matter, Too” in context of the rampant destruction across U.S. cities possibly totaling over $400 million.

For over a week, people have articulated some variation of the statement that “life is more important than property.” It’s entirely accurate, but it’s a cop-out, dismissal of how people sink their livelihoods and God-given gifts into such things, and an excuse to condone the rioting.

Going back to The Times, they’ve previously published columns penned by Islamic terrorists (Hamas and the Taliban) and totalitarian world leaders Recep Erdogan, Nicholas Maduro, and Vladimir Putin. On an even more appalling level, the paper has printed an item excusing pedophilia as not a “crime” but a “disorder.”

In all of those cases, there wasn’t an uproar or suggestions that those items put lives in danger or were riddled with errors. Jeryl Bier noted Sunday afternoon that the 325-word editor’s note on Cotton’s item attached but none for a column from a deputy leader of the Taliban.

Speaking of that, the Editor’s Note made measly claims about it being riddled with errors that, unsurprisingly, weren’t actually false (click “expand”):

For example, the published piece presents as facts assertions about the role of “cadres of left-wing radicals like antifa”; in fact, those allegations have not been substantiated and have been widely questioned. Editors should have sought further corroboration of those assertions, or removed them from the piece. The assertion that police officers “bore the brunt” of the violence is an overstatement that should have been challenged. The essay also includes a reference to a “constitutional duty” that was intended as a paraphrase; it should not have been rendered as a quotation.

Beyond those factual questions, the tone of the essay in places is needlessly harsh and falls short of the thoughtful approach that advances useful debate. Editors should have offered suggestions to address those problems. The headline — which was written by The Times, not Senator Cotton — was incendiary and should not have been used.

Slate’s Will Saletan noted that even The Times’s news article on the resignation lied about Cotton’s position. Correspondent Marc Tracy’s original lede claimed that Cotton “call[ed] for military force against protesters in American cities.” At the time of this blog's publication, a tweet with this lie was still up. 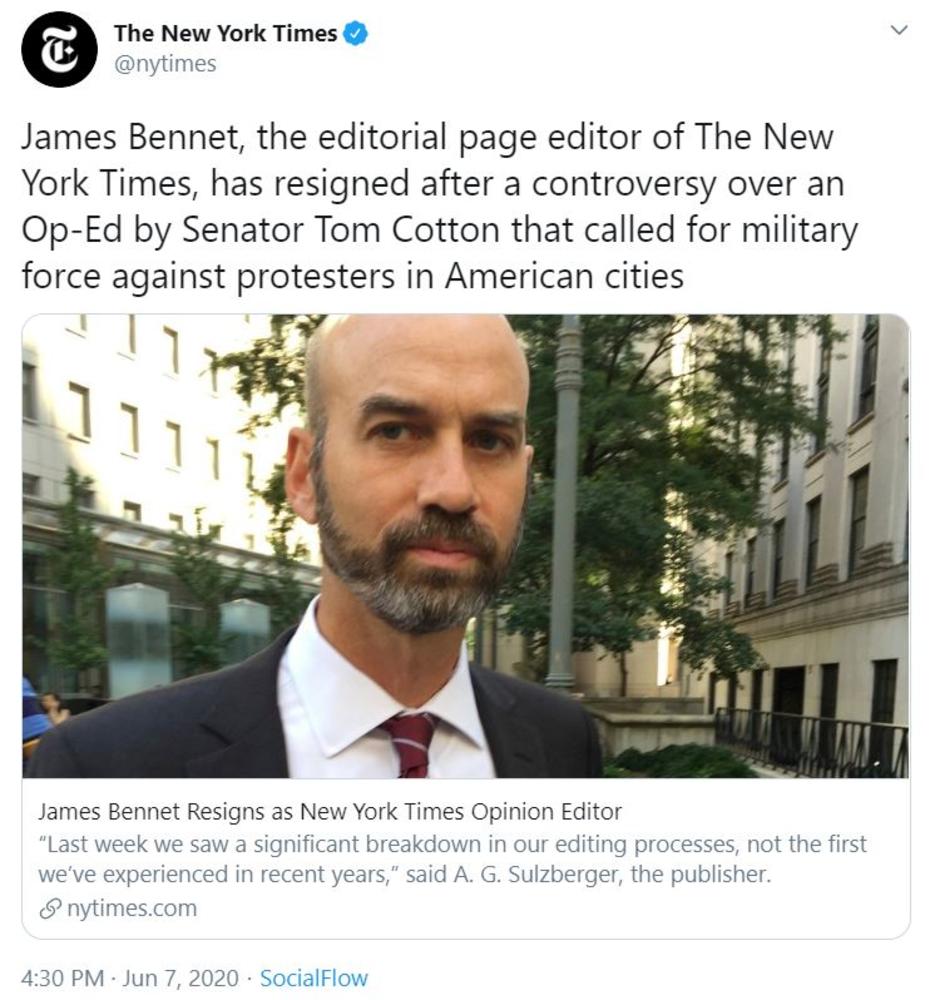 Saletan tweeted the relevant section from Cotton’s item that proved The Times had lied: “Cotton explicitly rejected an ‘equivalence of rioters and looters to peaceful, law-abiding protesters. A majority who seek to protest peacefully shouldn’t be confused with bands of miscreants.’”

Underlining the utter lie that journalists always admit to their mistakes, Tracy stealth edited his lede to read that Cotton had “call[ed] for a military response to civic unrest in American cities.”

Times media columnist Ben Smith published a puff piece Sunday evening on activist journalists like Yamiche Alcindor, heralding the ideological change in journalism: “The shift in mainstream American media — driven by a journalism that is more personal, and reporters more willing to speak what they see as the truth without worrying about alienating conservatives — now feels irreversible.”

On a more sinister level, the attacks on Times staffers that aren’t sufficiently progressive has gone beyond Bennet and extended to Jewish staff members Adam Rubenstein, Bret Stephens, and Bari Weiss.

Overall, this episode reemphasized what many of us already know, which was that most journalists can’t stand one ounce of outside criticism or critiques from anyone that doesn’t already share their worldviews.

Such refusal to accept criticism or hear outside voices will set a dangerous precedent, ensuring that the journalism profession is led by people who strongly oppose diversity of thought, hate the First Amendment, and shy away from people and topics other than those that help grow their brands.