Even worse, Darcy’s falsely claimed that Fox News “largely ignored the virus in the afternoon and into its primetime programming” due to the declassified unmasking list on Michael Flynn. FNC devoted over two hours of programming to the virus since the list came out, but facts were in short supply for the #FactsFirst network.

Darcy’s lead headline set the table: “Fox dumps virus coverage for conspiracy.” In other words, Darcy showcased CNN’s despicable attempts to shame any and all news outlets who go about their news gathering and presentation differently than Zuckerville.

If you woke up from a coma on Wednesday afternoon and flipped on Fox News, or checked the network's website, you'd be forgiven if you had no idea the country is currently grappling with a pandemic killing tens-of-thousands of Americans and leaving millions more unemployed.

That's because the conservative network largely ignored the virus in the afternoon and into its prime time programming. After Republican senators released a list of Obama officials who sought to unmask the name of an unidentified American caught in intelligence reports, who turned out to be Michael Flynn, Fox News went all in on the story. (When asked about the lack of coronavirus coverage, a Fox News spokesperson pointed to coverage from earlier in the afternoon.)

Unlike Darcy’s drivel, here are the facts. From when the list went public at 2:16 p.m. Eastern to the conclusion of live programming at 12:00 a.m. Eastern, the Fox News Channel spent 140 minutes and 48 seconds on the virus.

Notably, The Story with Martha MacCallum had an 11-minute-long exclusive interview with Treasury Secretary Steve Mnuchin on --- go figure --- the coronavirus.

And of their primetime shows, Tucker Carlson Tonight spent the most time on the pandemic to the tune of 18 minutes and 41 seconds. Overall, The Five was first out of the ten shows studied with 34 minutes and five seconds on coronavirus (due in large part to the President’s pool spray with the governors of Colorado and North Dakota).

Despite that, Darcy continued to lie and suggest FoxNews.com had similarly wiped the virus off the top of its home page (click “expand”):

Fox News hosts such as Tucker Carlson, Sean Hannity, and Laura Ingraham hyped the new developments as part of the supposed "OBAMAGATE" scandal the network has been promoting for the last few days with President Trump. Anchors at the network, such as Bret Baier and Martha MacCallum, also elevated the story. And during the day, softball interviews were given to Republican Senators Rand Paul and Ron Johnson, both of whom have, thus far, declined to appear on CNN.

Online, the Fox News homepage prominently displayed articles on the topic, while barely mentioning the coronavirus or havoc it has wrecked on the nation and world. It looked far more like the front page of the far-right website Breitbart than a credible news organization. Take a look for yourself at the version of the site on Wednesday night: 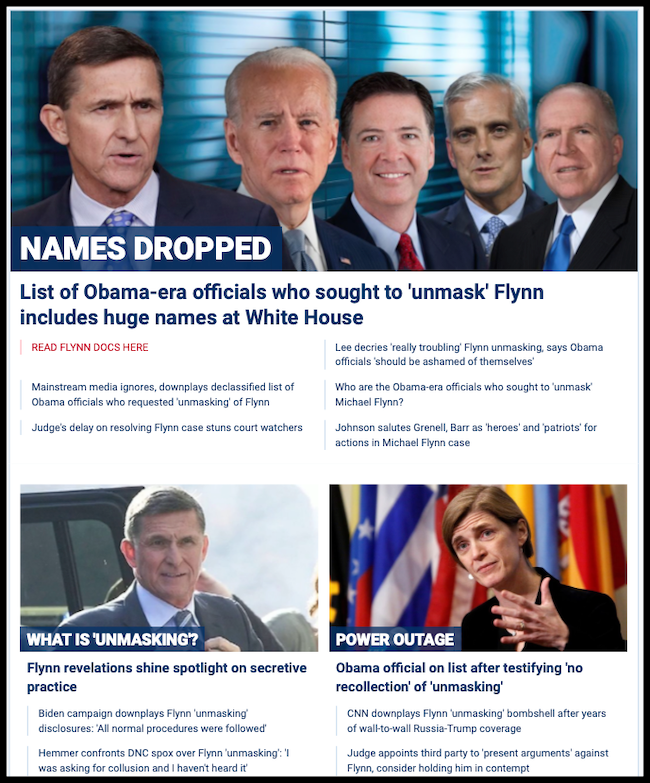 That Fox News would push a dishonest disinformation against Trump's political opponents is reprehensible, but not surprising. The network has been pumping poison into the national conversation for quite some time. But that Fox is engaging in such behavior as more than 83,000 Americans lay dead from a virus that has upended American life is particularly repugnant.

And while it might be tempting to ignore all of this, and brush it aside, there is a real news story here: It's that the President of the United States, in conjunction with a major American network, is polluting the information wells during a pandemic to help distract from the bad news and boost his re-election efforts.

Two things here. One, Darcy peddled this lie about FoxNews.com earlier Wednesday and, as our Twitter pal Road MN noted, Darcy deceptively cropped out a header that read “coronavirus latest” and a link to their site coronavirusnow.com.

Second, the list was a scoop by former Fox News correspondent Catherine Herridge, who’s now with CBS News. If Herridge is a Trump hack “polluting” the body politic, why did CBS hire her?

The Fox News hate went on for four more paragraphs, but we’ll spare you the pain of even having to glaze over the mumbo jumbo.

If one were to play Darcy’s game, would he quibble with time spent on Supreme Court cases about congressional oversight and the Electoral College, concerns about the peace deal between the U.S., Afghani government, and the Taliban? Or how about ABC’s beloved topic of the weather? And while we’re at it, would Darcy suggest it’s a waste of time to give more than a passing mention to the Ahmaud Arbery case?

Put simply, this goes beyond liberal media bias to questions of basic journalism and CNN doesn’t tolerate diversity. So much for the notion of walking and chewing gum at the same time.

The answer? Apparently, they can’t since it took them over four hours to cover (read: trash) the list. And speaking of ignoring important information, National Review pointed out that they haven’t exactly been eager to promote how their own poll showed Trump gaining on Biden in battleground states.