Throughout the coronavirus pandemic, CNN has shown perhaps the strongest inability to shy away from framing the pandemic through the lens of attacking President Trump and implicitly placing blame at his feet for the deaths of Americans.

Another tic has been their continued refusal to be honest with viewers about how frequent guest Dr. Leana Wen was a former president of Planned Parenthood. Since our first post about Wen on March 16, the Media Research Center kept tabs on Wen’s appearances and calculated her total airtime from March 2-April 2 as 150 minutes and 27 seconds across 44 appearances as a guest or soundbite.

Subtracting her original total of 73 minutes and 29 seconds over 16 appearances from March 2 to 16, Wen made 28 appearances on CNN (U.S. version and CNN International simulcasts) over the subsequent 17 days for 76 minutes and 58 seconds.

True to form, the 10 seconds of chyrons alluding to her Planned Parenthood ties did not increase by even a second. Therefore, the percentage of CNN coverage alluding to the nation’s leading abortion provider shrunk (during Wen appearances) to a miniscule 0.11 percent.

CNN instead stuck to its usual script identifying Wen as either an “emergency room physician,” “former Health Commissioner for the City of Baltimore.” It was an intriguing choice of words for someone who also led an organization (albeit briefly) that aborted over 345,000 unborn children in fiscal year 2018.

On her Baltimore City post, that sounds fairly non-partisan, but it’s worth noting that the job is a political appointment. As such, Wen was tapped by then-Democratic Mayor Stephanie Rawlings-Blake in December 2014. 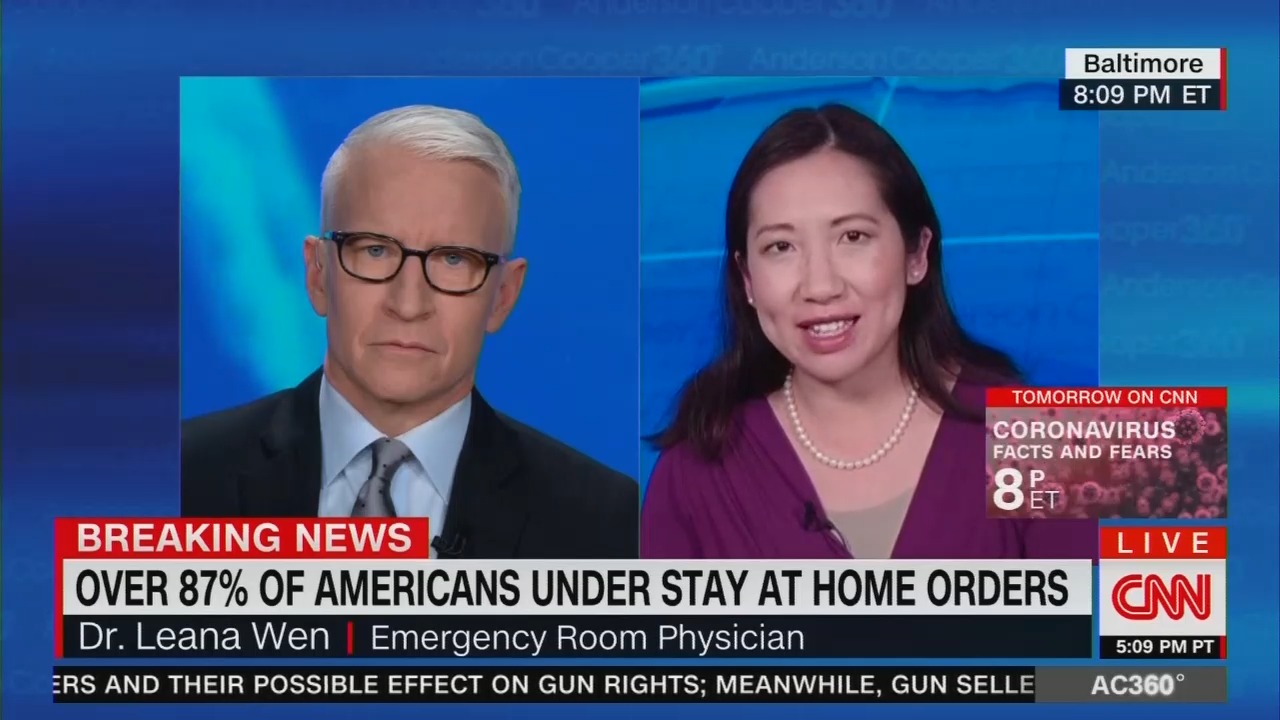 CNN chyrons have included those in addition to listing her as a visiting professor at George Washington University and “Johns Hopkins School [of] Public Health,” though she doesn’t have that listed on her Linkedin profile, GWU page, or Twitter bio.

As was the case with the first study, Wen’s longest appearance in this batch came during a CNN Global Town Hall: Coronavirus: Facts and Fears (which aired on April 2).

Further, Wen appeared eight times as a soundbite in taped reports, an increase from only one soundbite hit from March 2-16.

Leaving aside their rampant partisanship elsewhere, CNN has decided that, in this case, embodying their motto of “Facts First” doesn’t apply.

Methodology: To reach the final count, the MRC searched Nexis transcripts of live CNN programming from March 17-April 2 before watching all relevant segments for how both hosts and on-screen chyrons described Wen. The time count consisted of panel questions and statements in her direction, her answers, and the time count from our March 2-March 16 study. This count did not include a March 28 replay of the CNN Global Town Hall from two days prior.