Following the death of Iranian Gen. Qasem Soleimani, it’s clear that many liberal analysts, commentators, contributors, journalists, and pundits would have fallback positions at Iran’s English-language, state-run Press TV if any would lose their jobs.

For MSNBC’s Hardball host Chris Matthews, he would have quite the resume. According to a NewsBusters count between Monday and Thursday evenings, he adopted the Iranian-preferred word of “assassin” and its variations 60 times while discussing the Soleimani strike.

Matthews came ready on Monday, stating seconds into the show for the first of 20 times that night: “And what about the President Trump’s [sic] ordering of the assassination of that top Iranian general?”

Routinely putting American on the same plane as Iran, Matthews fretted that “we are in the assassination business again” even though “history shows assassinations don’t prevent wars, they start them.” By that, Matthews meant the killing of South Vietnamese President Ngo Dinh Diem on November 2, 1963.

On Tuesday, things didn’t get any better with another 11 utterances. Speaking to former Obama official Ben Rhodes, Matthews griped that “it was ‘in your face’ when we assassinated their general.”

Matthews was mid-thought with another one of the six former Obama flacks on Tuesday’s show (Kelly Magsamen) when he described the U.S as “finding our way step by step, tit-for-tat from an assassination of a beloved general.”

Channeling his other colleagues by parroting Iranian regime-like descriptors for Soleimani, Matthews would describe him as “beloved” five times. 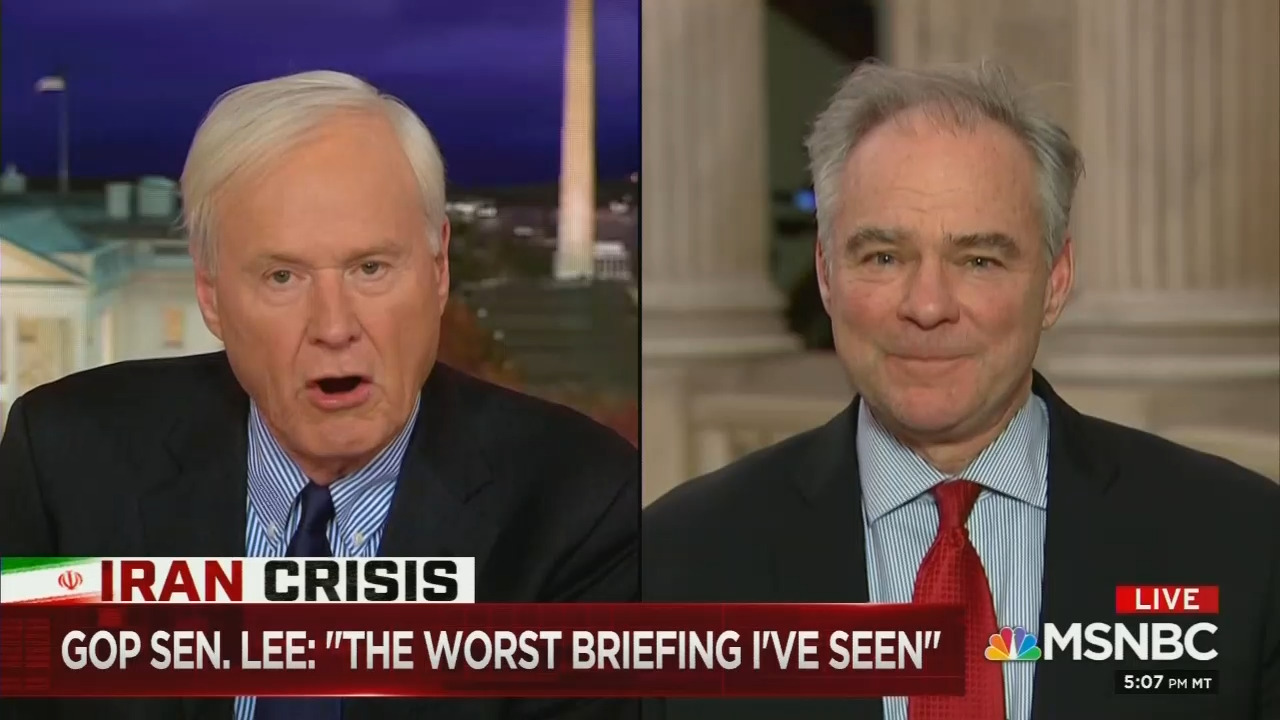 Reacting on Wednesday morning’s MSNBC Live to the President’s speech, Matthews would add another three to our total (though none on his Andrea Mitchell Reports hit).

There, the MSNBC pundit would chastise Trump: “[I]t is asymmetric in emotions and nationalism. He should have known killing that general, assassinating him in the light and the way see it is going to cause this all and he didn't.”

Matthews saved plenty for his own show hours later, using “assassin” plus its suffixes and tenses 12 times. Here were a few examples (click “expand”):

[TO SENATOR TIM KAINE] Senator, if you catch somebody in a bank robbery, an armed bank robbery and you shoot them, that’s one thing. If you got to where their living and find some guy you hurt blew up some banks or robbed some banks and you kill them in cold blood, that’s murder. This looks more like an assassination than it looks like stopping what someone in the commission of a crime. Your thoughts after getting that briefing? Which is it, an assassination or are we really stopping in the act of somebody blowing up somebody?

[TO SENATOR CORY BOOKER] And here’s the problem. I’m not playing an elitist here. I’m not an elitist, but it seems to me you ought to learn something you can’t in business school, is, when you shoot a guy, you assassinate a top general beloved by the Iranian people, so that the streets of Tehran are filled with tens and hundreds of thousands of people weeping with emotion about the loss of one of their heroes, it would be nice if our President knew he was one of their heroes, and knew what he was igniting in the last week.

And for Thursday’s 14 times, Matthews told viewers he doesn’t like “assassination” because, to him, “it’s a moral issue,” even in cases like Japan’s Yamamoto for their role in Pearl Harbor.

No word on how Matthews squared that with his pro-choice views.

Methodology: This NewsBusters study looked at all four of Hardball this week and two additional appearances on MSNBC Wednesday morning and afternoon. For Hardball episodes from Monday-Wednesday, NewsBusters used Nexis transcripts.