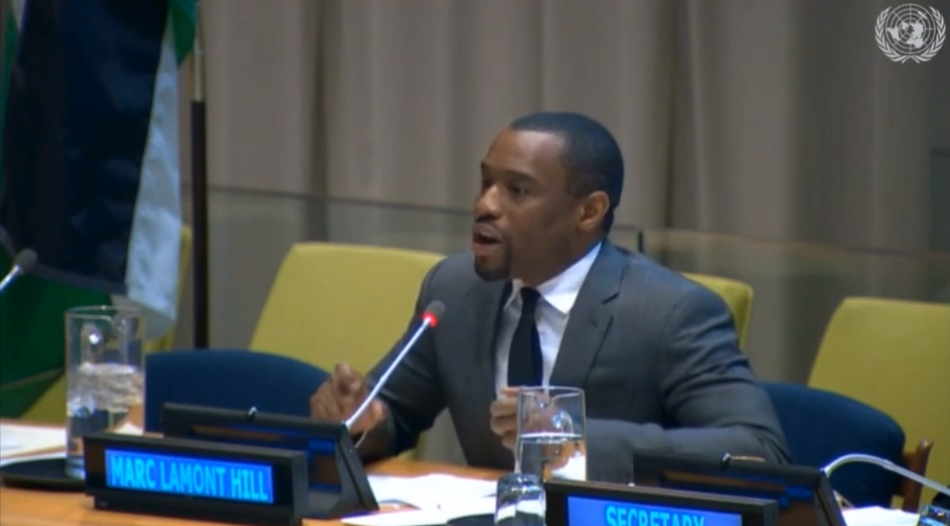 UPDATE, 4:02 p.m. Eastern: Moments after this NewsBusters post was published, CNN came out with an exclusive statement to Mediaite’s Aidan McLaughlin that the Jeffrey Zucker-led network had cut ties with Hill following his disturbing and embarrassing speech Wednesday at the United Nations against Israel that included an endorsement of violence against the Jewish people.

CNN’s statement was only one sentence as a spokesperson told McLaughen that “Marc Lamont Hill is no longer under contract with CNN.”

However, it should be noted that the CNN spokesperson nor the network writ large conceded that there was anything wrong with Hill’s remarks or that the Jewish people should be able to live in peace.

In other words, they must have been okay with Hill’s radical, violent views, which is ironic considering their “State of Hate” reports this week on the rise of hate crimes. Then again, it’s largely an issue on the right as CNN has tried to tacitly link those right-of-center to a bunch of loser neo-Nazis.

Below is the original version of this story.

Treating this story plus word of more trouble for Michael Avenatti like they’re strains of the plague, CNN and its illustrious media team have thus far refused to comment on a Wednesday afternoon screed by political commentator Marc Lamont Hill that called for violent uprising against Israel and a Palestinian state spanning “from river to sea.”

In other words, Hill borrowed talking points from Hamas and other Islamists who want to see Israel not only shrunken in size, but wiped off the map.

CNN is airing a special series of reports this week entitled “State of Hate” that largely focuses on anti-Semitic attacks and other hate crimes, but they’ve thus far painted it as a largely right-wing and white problem led by neo-Nazi losers. How ironic!

Contrary to Western mythology, black resistance to American apartheid did not come purely through Gandhi and nonviolence. Rather, slave revolts and self-defense and tactics otherwise divergent from Dr. King or Mahatma Gandhi were equally important to preserving safety and attaining freedom. We must allow, if we were to operate in true solidarity with Palestinian people, we must allow the Palestinian people the same range of opportunity and political possibility. If we are standing in solidarity with Palestinian people, we must recognize the right of an occupied people to defend itself. We must prioritize peace, but we must not romanticize or fetishizes it. We must advocate and promote non-violence at every opportunity, but we cannot endorse a narrow politics of respectability that shames Palestinians for resisting, for refusing to do nothing in the face of state violence and ethnic cleansing.

So, non-violence isn’t exactly the right away to go about things if the Palestinian people truly want to be free.

It was later in the speech that he offered the kicker: “To commit to political action, grassroots action, local action, an international action that will give us what justice requires and that is a free Palestine from the river to the sea.”

For more on how Hill’s speech was not only anti-Israel but also full of falsehoods, the Washington Examiner’s Tom Rogan wrote an excellent takedown here.

In a series of tweets on Thursday morning, Hill tried to explain himself in a lengthy statement on Twitter. Here are the tweets strung together as, apparently, Hill wasn’t familiar with how to tweet a thread (click “expand”):

Yesterday, I gave a speech at the UN in which I critiqued Israel’s polices and practices toward Palestinians. It’s baffling how people are not responding to the critique, but instead responding to things I didn’t actually say. In my speech, I talked about the need to return to the pre-1967 borders, to give full rights to Palestinian citizens of Israel, and to allow right of return. No part of this is a call to destroy Israel. It’s absurd on its face. I believe in full rights for all citizens. I believe in safety for all citizens. I believe in self-determination for all citizens. This is not an anti-Semitic position. While I have my own beliefs about one vs two state solutions (I prefer one), it is not my job as an outsider to decide for Palestinians or Israelis. Regardless of the resolution, however, Palestinians cannot be denied freedom, self-determination, or human rights. Unfortunately, we are in a moment where any critique of the Israeli government is called anti-Semitic. Any call for Palestinian freedom is seen as an attempt to diminish Israel freedom. This does not have to be, nor should it be, the case. I concluded my remarks with a call to free Palestine from river to sea. This means that all areas of historic Palestine —e.g., West Bank, Gaza, Israel— must be spaces of freedom, safety, and peace for Palestinians. Anyone who studies the region, or the history of Palestinian nationalism, knows that “river to sea” has been, and continues to be, a phrase used by many factions, ideologies, movements, and politicians. The phrase dates back to at least the middle of the British Mandate and has never been the exclusive province of a particular ideological camp. The idea that this is a Hamas phrase is simply untrue. It’s also ABSURD and illogical to suggest that a speech that explicitly called for redrawing borders and granting full citizenship for Palestinians IN Israel was also calling for its destruction. People either didn’t listen to the speech or they’re being dishonest.

Well then. Regardless, it’s hard to argue Hill “believe[s] in safety for all citizens” when he stated that “slave revolts and self-defense and tactics otherwise divergent from Dr. King or Mahatma Gandhi were equally important to preserving safety and attaining freedom” and the Palestinians should be afforded the same leeway.

When one suggests something other than non-violence is part of the equation, that would mean you’re advocating for violence. It’s that simple.

For all of their refusal to defend conservative Jews, the left-leaning Anti-Defamation League (ADL) called out Hill, tweeting that it was “a shame that once again, this annual Palestinian event at the UN does not promote pathways to a future of peace & instead promotes divisiveness and hate.”

As Conservative Review and Blaze host Steve Deace astutely noted, Hill’s excuse read like a “‘dog ate my homework’” excuse out “of the Farrakhan playbook.”

Hill’s views shouldn’t too entirely surprising for NewsBusters readers. Here’s a few NewsBusters headlines of his worst moments over the last few years: