The Aspen Ideas Festival has a reputation of being an elitist conclave of liberal academics, journalists, and pundits (with rare exceptions) to pat themselves on the back and how they could work together to advance their left-of-center worldviews.

So it was no surprise when the late June gathering held a June 27 panel called “How We Survive Attacks on Journalism” and featured a who’s who from the liberal media. Moderated by NPR’s David Folkenflik, it featured liberal Washington Post columnist Jonathan Capehart (though he wasn’t labeled a liberal), NPR’s Joshua Johnson, MSNBC host/NBC News correspondent Andrea Mitchell, USA Today’s Susan Page, and media televangelist and host of CNN’s Reliable Sources, Brian Stelter.

As expected, the 65-minute-long panel was a sanctimonious love letter to the liberal media with only occasional reflection about how to improve themselves and win back supporters (though Johnson did most of that).

So, without any further adieu, here were six deranged moments (presented in chronological order).

2. 1. Let’s Mention Media Criticism in the Same Breath as Journalists Being Jailed, Killed 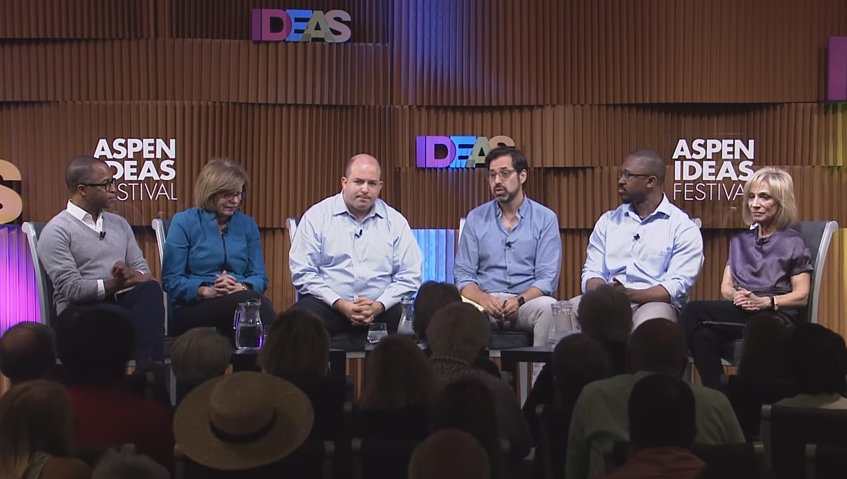 One of the more insidious ploys employed by some liberals has been the decision to mention outside media criticism (like the Website you’re currently visiting) in the same breath as actions and threats of physical harm against journalists.

Folkenflik did that near the start of the panel, simultaneously mentioning condemnations of the press to “the journalist who was just assassinated in the Philippines” and “the threats to journalists working in Turkey” or “what the Putin regime does in Russia.”

“These are live threats, and real ones. Yet we have a time where journalists are being rhetorically attacked on a seemingly frequent basis,” he added.

Capehart followed up by callously suggesting that Trump calling out the liberal media will lead to a future where journalists will be assassinated and it’ll be met with shrugs:

But when the President of the United States goes after journalism, goes after journalists, goes after individual either networks or individual reporters, it's worrisome...The President sets the example for other leaders in other countries, so if the President of the United States can say that “journalists are the enemy of the people,” then there's — they're like: “Hey. Fake news. Journalists are the enemy of the people. Oh, a journalist gets assassinated? No big deal. No need to worry about freedom of information, or even the rule of law.” So that's why, even though his tweets can be unhinged and sometimes laughable — sometimes, you just have to laugh to keep from crying. But when it comes to attacking the press, we have to take that seriously. 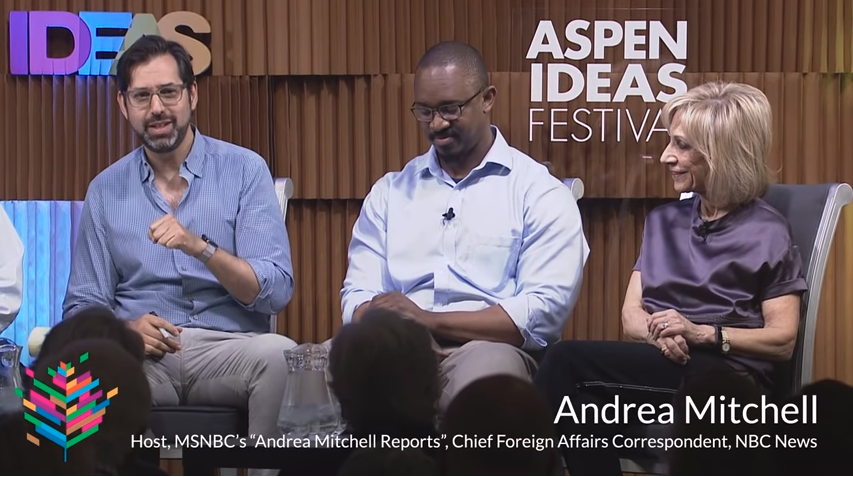 Sure, one possible approach for a moderator is to make their panelists comfortable, but nothing quite shows the media’s love affair with itself more than journalists gushing over other journalists.

Folkenflik swooned in his introduction about how Mitchell had covered seven Presidents “with finesse, verve, and breaking almost every story that she can find a way to break, in all those years.”

When it came time for Mitchell’s opening remarks, Folkenflik bemoaned how President Trump had, at one time, “desperately unfairly” referred to her as “Hillary Clinton's PR person.” For those convinced Mitchell’s a straight-shooter, check out her tag here and see if that holds true.

He quickly added that Stelter was “Captain Media” and introduced Capehart as “an opinion writer, columnist, editorialist for The Washington Post” in addition to “an almost constant presence on MSNBC, and eloquent in all of these venues.” Notice how there was no “leftist,” “liberal,” or “progressive” label for Capehart.

4. 3. PANTS ON FIRE: Mitchell Insists Journalists Are ‘Not Stenographers’ for Anyone 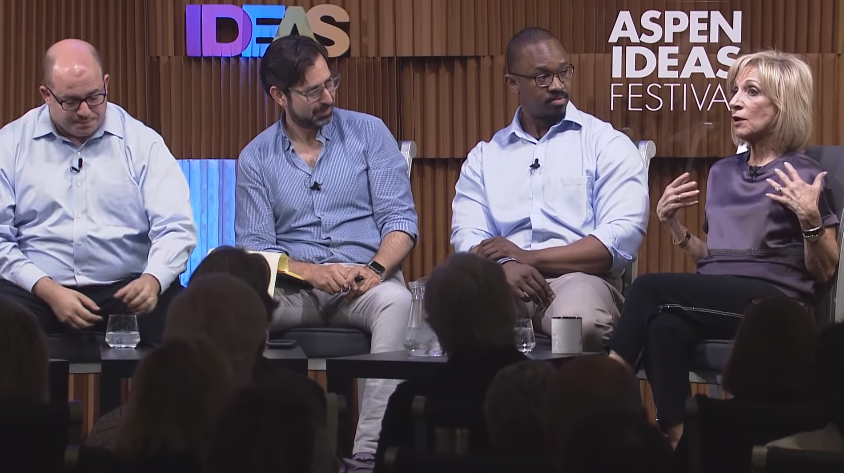 Mitchell lashed out at the President’s attack on the media by declaring that “it hurts the ability of Americans to understand what their government is doing” and, on the characterizations of her being a Hillary Clinton ally, the NBC journalist asserted that “she thought I was a royal pain in the ass during that entire campaign.”

Stelter interjected to hail Clinton for having “had enough respect not to say so” in public “the way Trump has, so at least she had respect.”

Also in this exchange, Mitchell falsely asserted that “from...March of 2015, when The New York Times broke the story about her private e-mail server....until September 4th, when I sat down with her for her first interview, she had not done a press interview.”

While Mitchell might have meant broadcast network news, it’s nonetheless false because CNN’s Brianna Keilar had scored a sit-down with Clinton on July 7, 2015, and included questions on Clinton’s e-mail scandal.

Mitchell also dropped this humdinger to Folkenflik’s agreement that journalists are “not stenographers” for anyone:

FOLKENFLIK: Right. You're definitely not a stenographer. So you went after Clinton, and ultimately, no doubt with the prodding of her staff, but you ultimately got her to sit down and address these questions about a topic that she desperately wanted to avoid. There was accountability there, although avoidance there for a long time, as well. 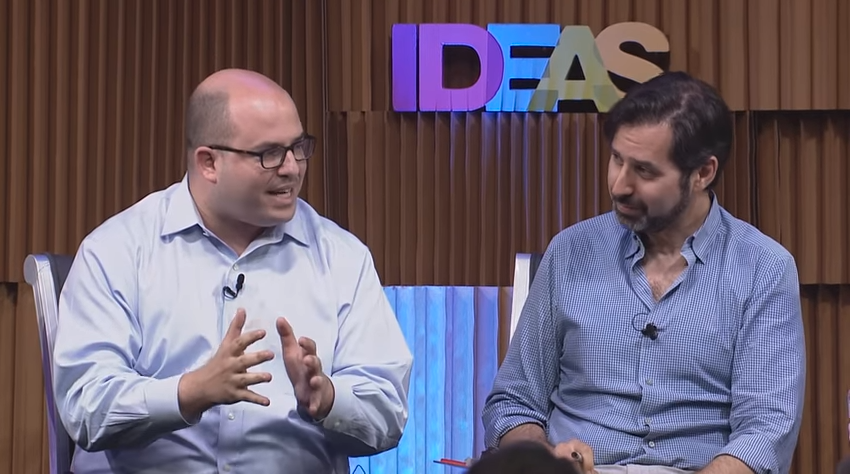 Folkenflik left Stelter ready for liftoff with a series of triggering questions that actually were sensible:

Stelter was not amused, responding that it’s worth freaking out “[b]ecause the most powerful people in the world are trying to destroy our news organizations,” including the President and “has never happened in our nation's history, as far as I'm aware.” Sorry, Brian, but progressive Woodrow Wilson would beg to differ.

The CNN senior Media correspondent then uncorked a doozy of a tangent, proclaiming that “President Trump is poisoning the American people, a subset of the American people that have been infected by the poison, it is getting worse every day and we're going to reckon with the consequences for decades.”

Stelter went onto suggest the country was in the midst of a “crisis” and “emergency” while suggesting that the news media’s mistakes “are few and far between”:

I find myself wondering in 20 years when will look back will we think this was an emergency. Why didn't we step up and say this is an emergency? Now, many of us do call it a crisis. There is a crisis of credibility for the White House. There's also a crisis of credibility for the press. We're clearly flawed and I do not think we should pretend we're not flawed, we do not make mistakes. But rather than hang on to the mistakes, which are few and far between, there's this incredible amount of journalism being produced everyday that's being dismissed by a segment of the population....I think we have to ask ourselves is this an emergency? What should I, what should we be doing differently? If this is a crisis, what should we be doing differently? Will we be proud of ourselves in 20 years? Was this an aberration or was this the start of something new and very troubling? And then how are we going to win people back? 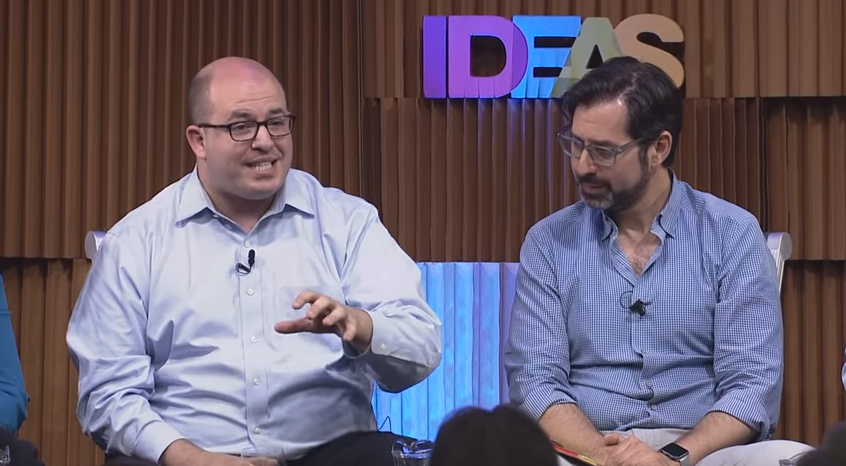 Making another appearance on this list, Stelter offered a vehement defense of the liberal media’s exhaustive and seemingly never-ending Trump coverage with so little time spent on subjects not relating to the President.

An audience member raised this reality with the panel, telling them that he’s “old enough to remember watching the news and seeing what was happening in the world and that doesn't happen now” because “I'm feeling as though the amount of time that's given to Trumpisms is so out of proportion.”

Stelter quickly took issue, stating that “Trump is the biggest story in the world and I think Trump is about America” before, again, going absurdly apocalyptic and currying more favor with the Resistance to Capehart’s approval:

We are debating basic American values. Personally, I want to watch that 24 hours a day. I want the never ending talk show about what we are as a country. I think what's at stake is so incredibly serious. This is a crisis, so we have to cover it that way. But I think the broader answer to your question, if I may, is I think the internet changed everything 20 years ago, changed  everything. Which means CNN can't be what it was 20 years ago and NPR can't be and The New York Times can't be. I think the Internet changed everything, which means all the news is on your phone and on TV and the radio. We can't be that anymore. I've given up on the idea that we can have an old fashioned newscast. I know others are not giving up on it, but I have.

Thankfully, Mitchell and Page disagreed. Mitchell conceded that “there is a legitimate criticism that there's too much focus on Trump and that is partly because of the [Mueller] investigation” and thus kept news organizations from covering other happenings across the federal government.

Page told her fellow panelists that Trump is “a story of a lifetime — of a generation” that requires reporters “do a very serious job of covering” him, but “[h]e's not the only story that's important.”

“And there are important stories in Washington and across the country and around the world that are unrelated to President Trump that also warrant coverage,” she added. 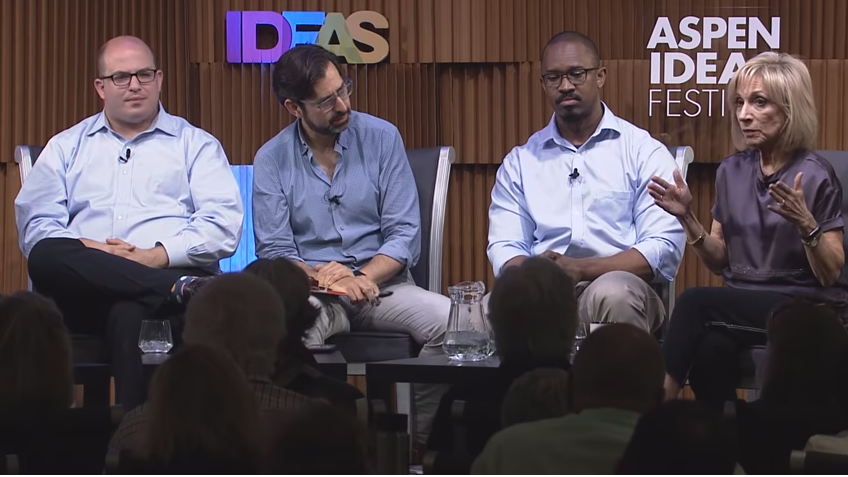 Bookmark this one for the next time Mitchell appears on, say, Rachel Maddow and echoes most everything the liberal pundit puts up.

While discussing the difference between opinion and straight reporting, Mitchell spoke to the culture at MSNBC where “we have reporters, we have very much less opinion” and how political strategists on her own show are different than pundits because they were “a credentialed person who has worked on a campaign.”

As for daytime vs. primetime MSNBC, she claimed that reporting vs. opinion is “not the same as what you see in prime time on my network and so it's more segregated in that way.”

Four words: Give me a break.