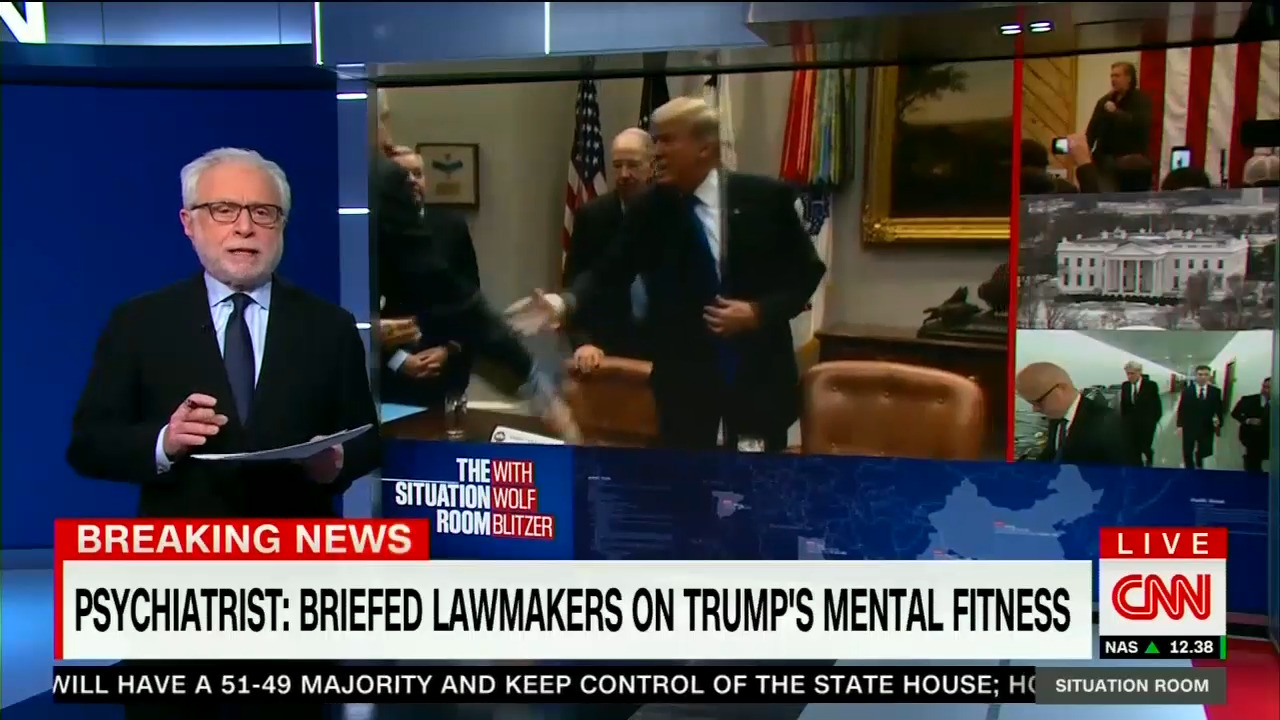 On Thursday, CNN’s The Situation Room spent over 20 minutes during its two-hour airtime peddling accusations by Democrats, a far-left Yale psychologist, and the hot takes of CNN partisans like Brian Stelter that President Trump was mentally ill and thus should be removed from office.

This topic has long been on CNN’s periphery, but this time it came on a flagship program following other discussions on at least three other CNN programs (CNN Newsroom with John Berman and Poppy Harlow, CNN Newsroom with Brooke Baldwin, and The Lead with Jake Tapper).

After deducting commercials, more than one-fourth (25.5 percent) of the airtime of CNN's Situation Room on Thursday was devoted to Trump's mental health (roughly 20 minutes and 50 seconds out of a total of nearly 82 minutes of actual news coverage).

The book’s shocking anecdotes raised more questions about the President's mental fitness. Press Secretary Sarah Sanders calls that ‘disgraceful’ and ‘laughable,’ but a Yale psychiatrist says she and another psychiatrist recently briefed a dozen U.S. Lawmakers, mostly Democrats who were worried about the president's mental state.

Both the 5:00 p.m. Eastern and 6:00 p.m. Eastern hours featured full reports on the claims that Yale psychologist Bandy Lee made to roughly a dozen members of Congress that Trump was not only mentally unstable, but he must be stopped soon or face catastrophic consequences.

All of these warnings have been promoted despite the fact that Lee hasn’t been able to formally evaluate or speak with the President, which is the modus operandi and ethical standard set forth by mental health professionals.

Using reports by Sulen Serfaty at 5:09 p.m. and Ryan Nobles at 6:08 p.m., Lee’s claims were then partnered with Wolff’s book, which painted the White House as chaotic and led by a President with a short attention span and unwillingness to sit for detailed briefings. 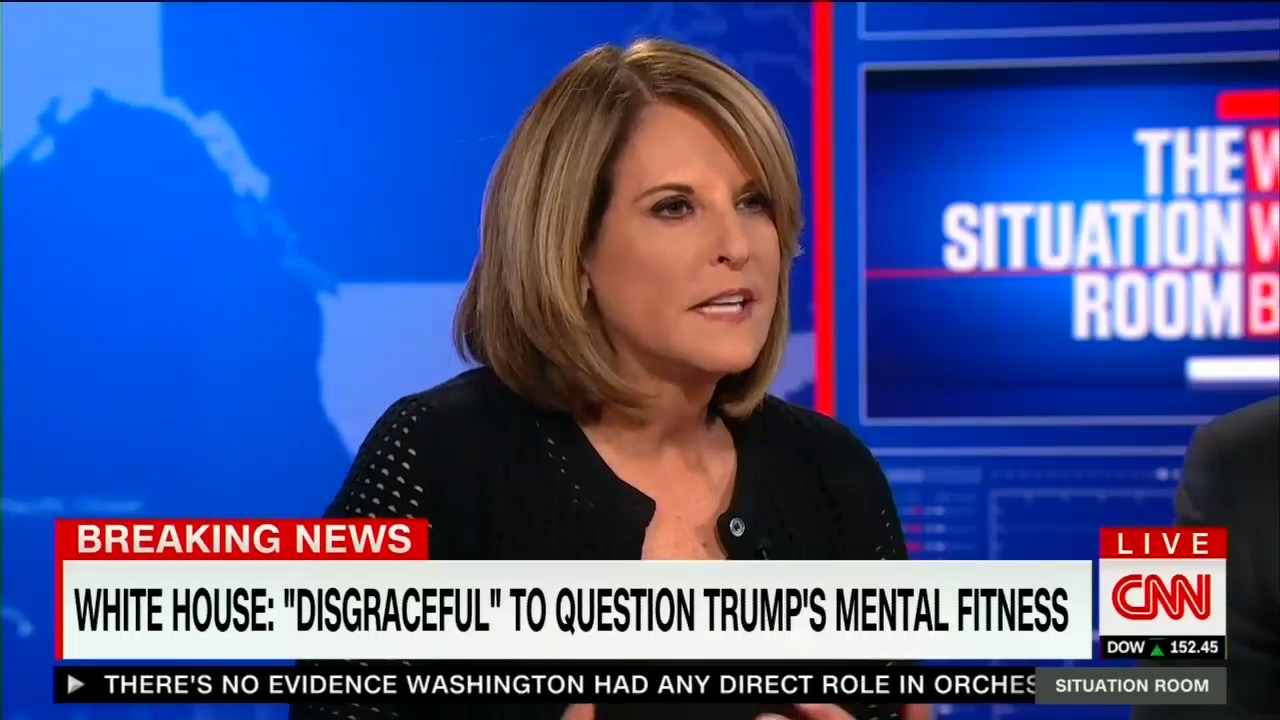 Serfaty’s live shot was followed by Blitzer openly wondering with Democratic Senator Richard Blumenthal (Conn.) about Trump’s mental conditions and pleas for him to have a formal mental evaluation.

It's never good for the President when a question about his mental acuity is raised at a presser with his press secretary as happened today and I think one of the most devastating parts of this is that this is now part of the national conversation....You could make the political case that Democrats are having this meeting because they want to raise the specter 25th amendment because mentally acuity is one of the reasons you could potentially get rid of a president. But — but given the fact that there are bits of conversations that Michael Wolff quotes in his book and talks about people who work for the President who said he couldn't focus for more than 30 minutes, it was difficult to have a conversation with him. I think it takes it takes it -- I think it does take it to a different level.

So, in other words, music to the ears of Brian Stelter.

The 6:00 p.m. Eastern hour saw more of the same: Using Lee as a prop to make the point that likely some at CNN personally believe to be true. Following the live report from Nobles on Lee questioning Trump’s “mental fitness,” Blitzer stated that the “whole notion” of this topic is “pretty extraordinary.”

To be blunt, it’s disingenuous seeing as how CNN, has been a real slave driver pushing this narrative while deriding Fox News for supposedly undermining American institutions like the liberal media and Robert Mueller.

Blitzer interviewed former CIA Director, Defense Secretary, and White House chief of staff Leon Panetta and, like with Blumenthal, Blitzer hammered away with questions about Trump’s mental health. To his credit, Panetta argued that “we ought to be careful not to read an awful lot into that” since Lee’s accusations boil down to just her “personal opinions.” 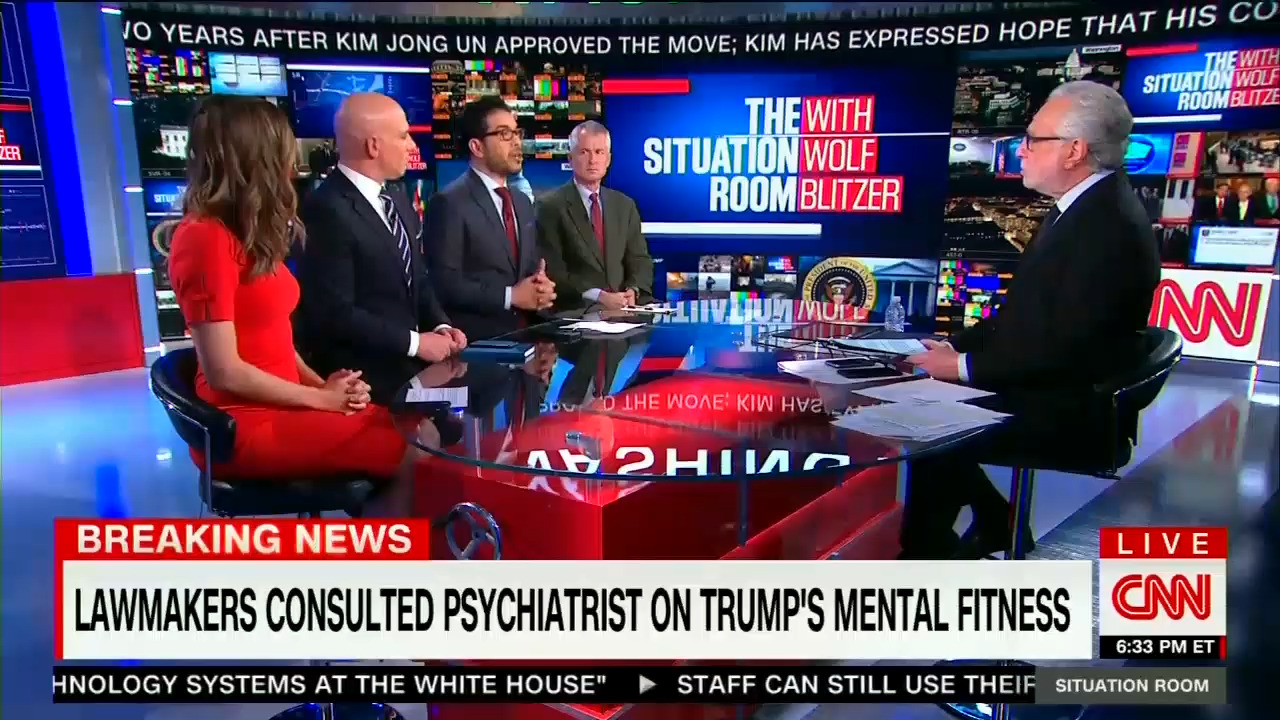 Naturally, CNN didn’t take Panetta’s advice. Blitzer opened a segment with his 6:00 p.m. Eastern panel by hyping that the country is in “unchartered territory” now thanks to Trump’s mental instability.

Washington Post editor David Swerdlick conceded a few points to Blitzer, but then moved matters back to reality:

It is unchartered territory and I suppose if you have members of Congress who are sincerely concerned that they may have to exercise their 25th amendment responsibilities at some point, maybe this is somewhere to start, but I'm skeptical about this for this reason. Look, President Trump made racist statements during the campaign...63 million people went out and voted for him and most members of his party in Congress still support him. So this idea that they, all of a sudden now, members of Congress, need to evaluate his mental state, I think, is mostly a fig leaf for people not sort of accepting their own political roles in this process.

Multiple CNN shows insinuating that Trump is mentally ill (and thus must be removed) will only increase the claims by diehard Trumpers that there's a coup being orchestrated against him.

Put simply, this disconnect is dangerous when two sides are so far apart on something so fundamentally important and thus undermines our country's governmental institutions.