A disturbing trend has emerged since the presidential election as the liberal media have been promoting neo-Nazis and white nationalists in hopes to (admirably) discredit them and falsely insinuate that they were far-right conservatives who propelled Donald Trump to the White House.

Well, this trend manifested itself with five minutes and 17 seconds Tuesday morning on CBS and NBC that attempted to label the neo-Nazi conference as one featuring “conservative extremist[s]” and added up to three times more coverage than they’ve had on the March for the Life in the past four years (at one minute and 40 seconds).

As I’ll return to later, this illustrated not only the disdain the media have for actual conservatives but also where their mindset lies when it comes to how it wants to portray people not standing with the left even if it means legitimizing hateful parts of humanity.

NBC’s Today was the most notorious as it awarded the Nazi-saluting National Policy Institute conference four minutes and 17 seconds of coverage that began with a full report from correspondent Hallie Jackson.

Co-host Savannah Guthrie stated in the lead-in that “some disturbing new video has surfaced of white nationalists meeting this weekend in Washington and openly celebrating Trump's election” while Jackson explained the video (from The Atlantic) featured “a conference of the alt-right, a conservative extremist movement with ties to white nationalism” even though their leader in Richard Spencer, is no conservative on issues like abortion.

“In the crowd, a handful of supporters responding with a straight armed salute. Spencer telling NBC News his words and the crowd's reaction were meant to be what he calls “ironic” and “exuberant,” arguing the alt-right isn't a neo-Nazi group,” Jackson added.

As the networks usually do in these incidents, they turn to the anti-conservative Southern Poverty Law Center (SPLC) head Richard Cohen to chart the rise in hate crimes since Trump’s election.

In terms of speaking to Americans, we just saw Hallie’s report on that gathering of white nationalists in Washington over the weekend. We saw that Heil Trump salute that looked so much like a Heil Hitler salute. What does President-elect Trump need to say about that right now to stop that in its tracks?

Wallace correctly shot back that while the media have been using “alt-right and white nationalism” “interchangeably,” but made clear that this type of hate is “white supremacy” and the only satisfactory response Trump should give is that “they’re not with me” and “denounce it.”

With ABC’s Good Morning America not covering this story, CBS This Morning spent exactly one minute in an extended brief that this hateful group couldn’t have dreamed of as co-host Norah O’Donnell reported in part:

The President-Elect's transition team put out a statement yesterday denouncing racism of any kind. Earlier in the day, video surfaced from an alt-right group in Washington cheering Mr. Trump's election. The alt-right is a fringe movement with ties to white nationalism....The group says it is excited about Steve Bannon's appointment as White House chief strategist. Bannon used to run Breitbart News, which he himself described as a platform for the alt-right movement. Bannon says the movement is not racist.

Going back to my earlier point about the media’s toxic obsession with the National Policy Institute and their Nazi-saluting supporters, this only undermines the objective that all decent human beings should have in not giving these individuals attention but inadvertently, the media’s ensuring that millions of new people will learn about them.

In a quick aside, the split in coverage between what they’ve done in one set of newscasts with the “alt-right” and what’s been done in four years in covering the faith-filled and peaceful March for Life (which tens of thousands attend) gives readers and viewers perhaps the most vivid case of how they’re attempt to influence our lives through agenda-setting and paint the picture they want about what they deem conservative.

As David Reaboi tweeted on Monday, such a reality is “[u]nfathomably repulsive” but doesn’t appear to be ending because, in the minds of some in the press, it’ll help bring down the Republican Party if they’re painted vividly enough as in lockstep with these anti-Semites.

The Federalist’s David Harsanyi penned an incredible piece on Tuesday about the media’s “political convenient symbiotic relationship” they’ve formed with the alt-right and neo-Nazis. Here’s some of what he had to say (though I suggest reading the whole thing):

For Jew-hating racists, the attention means they can playact as a viable and popular movement with pull in Washington. In return, many in the media get to confirm their own biases, and treat white supremacy as if it was the secret ingredient to Republican success.

Meanwhile, this obsessive coverage of the alt-right not only helps mainstream a small movement, it’s exactly what the bigots need and want to grow.

Why would The Los Angeles Times give the GQ treatment to a guy who “heils” victory and quotes Nazi propaganda onstage in German, as Richard Spencer did this weekend? I suppose it’s the same reason every major publication gave David Duke, who was polling at 3-4 percent in his Louisiana Senate race all year, their undivided attention. (What am I talking about? We’re still hearing about Duke on a daily basis.) It’s to create the impression that they matter.

Another reading is that coverage is driven with the cynical purpose of exaggerating the importance of neo-Nazis to tie them to Republicans. The media will now demand the administration denounce white supremacists every time they have a meeting — which itself intimates that there is a connection. Conflating these scary things can create the impression that conservatism is Trump which is Bannon which is Duke which is Spencer.

The relevant portions of the transcript from NBC’s Today on November 22 can be found below.

SAVANNAH GUTHRIE: Meanwhile, some disturbing new video has surfaced of white nationalists meeting this weekend in Washington and openly celebrating Trump's election and now, the President-elect is being asked to respond. NBC’s Hallie Jackson has more on this growing controversy. Hallie, good morning. 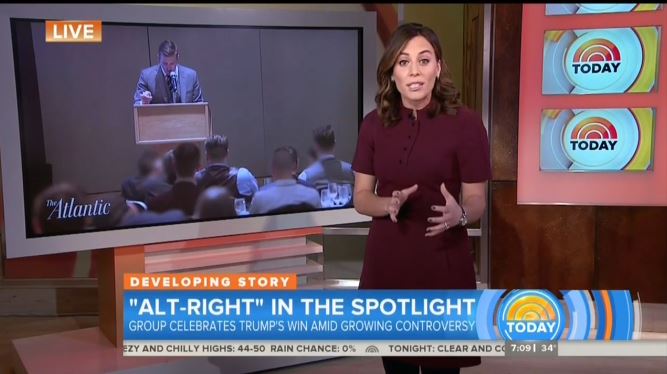 HALLIE JACKSON: Hi, Savannah. Good morning to you. We're talking about a gathering of the National Policy Institute here in Washington. A conference now causing controversy for what was said and who it was said about. New video now surfacing of a conference of the alt-right, a conservative extremist movement with ties to white nationalism. At the podium, the self-proclaimed leader of the movement, Richard Spencer, using language heard in Nazi, Germany.

RICHARD SPENCER: For us as Europeans, it is only normal again when we are great again. Hail Trump, hail our people, hail victory!

JACKSON: In the crowd, a handful of supporters responding with a straight armed salute. Spencer telling NBC News his words and the crowd's reaction were meant to be what he calls “ironic” and “exuberant,” arguing the alt-right isn't a neo-Nazi group. That they feel free to criticize Trump while also praising the President-elect for, as he says, being good for the movement. In response to the conference in Washington, a Trump transition spokesman say: “President-elect Trump has continued to denounce racism of any kind and he was elected because he will be a leader for every American. To think otherwise is a complete misrepresentation of the movement that united Americans from all backgrounds. ”

ANTI-TRUMP PROTESTERS: We say no to racist hate. We don’t want a white state.

JACKSON: Through his campaign, Trump has repeatedly denounced the support of racist groups like the KKK.

JACKSON: And when questioned recently about some supporters inciting violence after the election, he said this.

JACKSON: Richard Cohen represents the Southern Poverty Law Center, which has counted more than 700 reports of hate crimes nationally, like offensive graffiti and racial slurs since election night, a spike it says occurred after President-elect Trump won the White House.

JACKSON: One of Trump’s first West Wing appointments? Controversial chief strategist, Steve Bannon who ran conservative news outlet Breitbart aiming to make it as he said this summer, “the platform for the alt-right.” Cohen concerned about the tone that sets for the President-elect’s administration.

COHEN: He said he wants to bind the wounds of division yet in Bannon he appointed someone who fans the flames of division.

JACKSON: But Steve Bannon, in a recent interview with The Wall Street Journal, said he has zero tolerance for racist or anti-Semitic overtones of the alt-right.

MATT LAUER: In terms of speaking to Americans, we just saw Hallie’s report on that gathering of white nationalists in Washington over the weekend. We saw that Heil Trump salute that looked so much like a Heil Hitler salute. What does President-elect Trump need to say about that right now to stop that in its tracks? 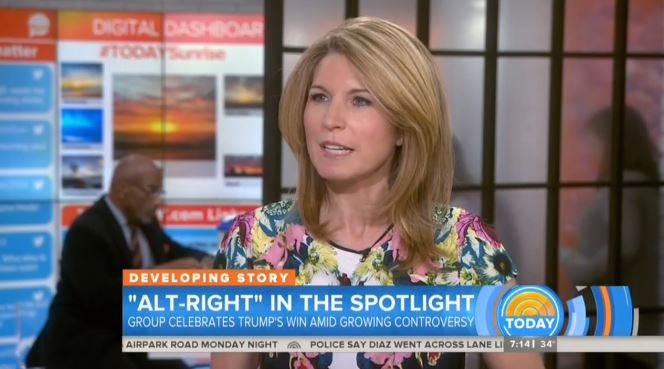 NICOLLE WALLACE: So, we can call it the alt-right and white nationalism and I understand those are being thrown around interchangeably. It is white supremacy and there is one answer. It is not only to say they're not with me, it is to denounce it and in the same way that pressured candidate Obama to give a speech about race when the conservation in this country about race became very fraught, I think the pressure is building on Donald Trump to address the pressure on speaking about white race and what are blurred lines between white supremacy and his base of support and if he doesn't, the responsibility will now be on him if we see some sort of uptick in racial intolerance or racial incidents and this is not really a concern among adults but if you see these kinds of conversations — this kind of speech spreading to schools, this is squarely on his shoulders.