Far-left Black Lives Matter activist Deray Mckesson conducted Monday afternoon interviews with CNN and MSNBC in light of his weekend arrest during a Baton Rouge, Louisiana protest and each went quite differently as MSNBC’s Kristen Welker allowed Mckesson to recklessly blame police for the deadly Dallas shootings because no one would have been in the street if they hadn’t shot black men to death.

In contrast, CNN’s Ashleigh Banfield had only half the time Welker was allotted to hammer Mckesson on past tweets of his about law enforcement that many deemed hateful and unbecoming of a public figure.

Welker’s line of questioning was anything but tough as she began by inquiring about how he was doing and what his treatment by police was like during his 16 hours of detainment.

After two questions seeking to have Mckesson explain what led up to his arrest, Mckesson went unchallenged in accusing police of “provoking protesters the entire time and I was just one of the many people they were provoking in order to create a climate of fear and chaos that they could exploit.”

Perhaps the biggest softball came when Welker wondered if police had beaten or hurt Mckesson: “And I want to be very clear. Were you hurt in any way during this arrest?” 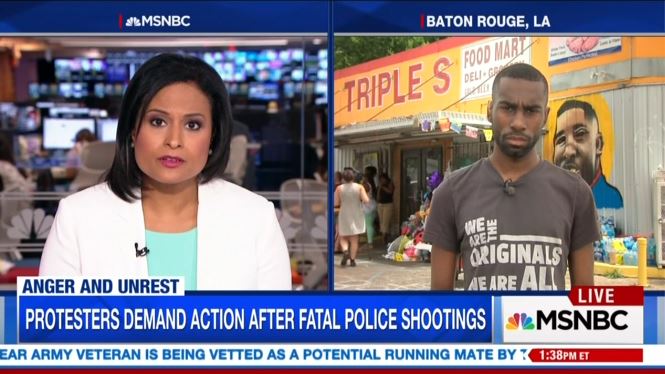 Welker brought up comments made by former New York City Mayor Rudy Giulani about the Black Lives Matter movement and thus teed Mckesson up to state that “it is better for the American people and certainly the people of New York City that Giuliani is no longer a public official” because “[h]is statements remind us that he is both the disgrace of the country and an embarrassment.”

Again going without pushback in comments that certainly would have drawn pushback if someone had made them about, say, President Obama, Welker wanted Mckesson’s thoughts on Dallas and the radical activist seemed to blame the police themselves for the murderous tear they endured on Thursday:

[W]e should not be in the streets and the movement didn't cause anything, the police killing people is what caused all of this, that the movement has been a response to the violence in communities, and that people have been organizing for the past two years, specifically, before a long time because we know that our communities can be safer than they are and the safety of our communities is not predicated on the presence of police, but with Dallas specifically, again, there are more questions right now than there are answers.

Instead of suggesting that what he had just uttered was dangerous, dishonest, or inflammatory, Welker pushed Mckesson to reiterate his argument: “I want to be clear about what you just said, you just said that the police ultimately you think are at the root of this and the tensions that are being caused by police?”

To conclude the nearly-10-minute interview, Welker wondered if “everyone” should “take a step back” but didn’t direct anything about what Mckesson just stated or beforehand and so the failed Baltimore Mayoral candidate emphasized that the Black Lives Matter movement has done or said nothing insidious while it’s the police that are the problem:

What I will also say is that there is no rhetoric in the movement that matches the damage inflicted by the police as they kill people across the country...I also want to be clear that the police killing people has to stop and the reason that there is any type of rhetoric at all is because the police continue to kill people without any sign of accountability and that is really the issue at hand.

CNN’s Legal View host Ashleigh Banfield spoke to Mckesson in the previous hour for half the time but was able to fire this hardball question about his past tweets that could easily be described as horrendous and unprofessional:

[W]hen you say that Mayor Giuliani’s speech is disgraceful, some say that about your past rhetoric as well and I just want to read a couple of your past tweets. From April 3 of last year, “this,” quote, “‘feared for my life’ language is perhaps the new execution motto of America's largest gang, the police.” And then April also of last year: “The police are killing people. Officer Friendly is akin to the myth of the American Dream — seductive but a deadly illusion nonetheless.” And then, May 23 of last year: “The police are engaged in ethnic cleansing, America.” That’s pretty strong rhetoric coming from you as well. Do you think that is helpful, pretty strong rhetoric. Do you think it is helpful or do you regret those words?

Of course, Mckesson didn’t apologize for his divisive language because, in his mind, “stand[s] by those words because I know they are true and what I know to be true as well is that black people are disproportionally killed by the police in this country and we have to be honest about the raciual undertone and the racist undertone that undergirds so much of these actions and we are not afraid to say those things in public. It is the truth behind the protest.”

By rambling on and on, Mckesson had successfully avoided a follow-up by Banfield as the clock had struck 1:00 p.m. Eastern and thus time for Banfield to depart for that hour’s host in Wolf Blitzer.